How to partner with top offshore .NET developers?

According to the PYPL index, .NET has had continued popularity over the last ten years, and many businesses have used it to ensure the effectiveness of their deliverables.

However, both the UK and Europe are currently experiencing a profound lack of tech professionals. In the US, demand for software engineers, including C# developers, is currently surpassing the supply. LinkedIn lists over 52,000 open C# positions in the USA as of March 2021. Thus many companies opt for hiring offshore .NET developers.

But where to look for offshore .NET developers, how to assess their skills, and what certifications to consider? Let’s find out.

Where to look for offshore .NET developers: Eastern Europe 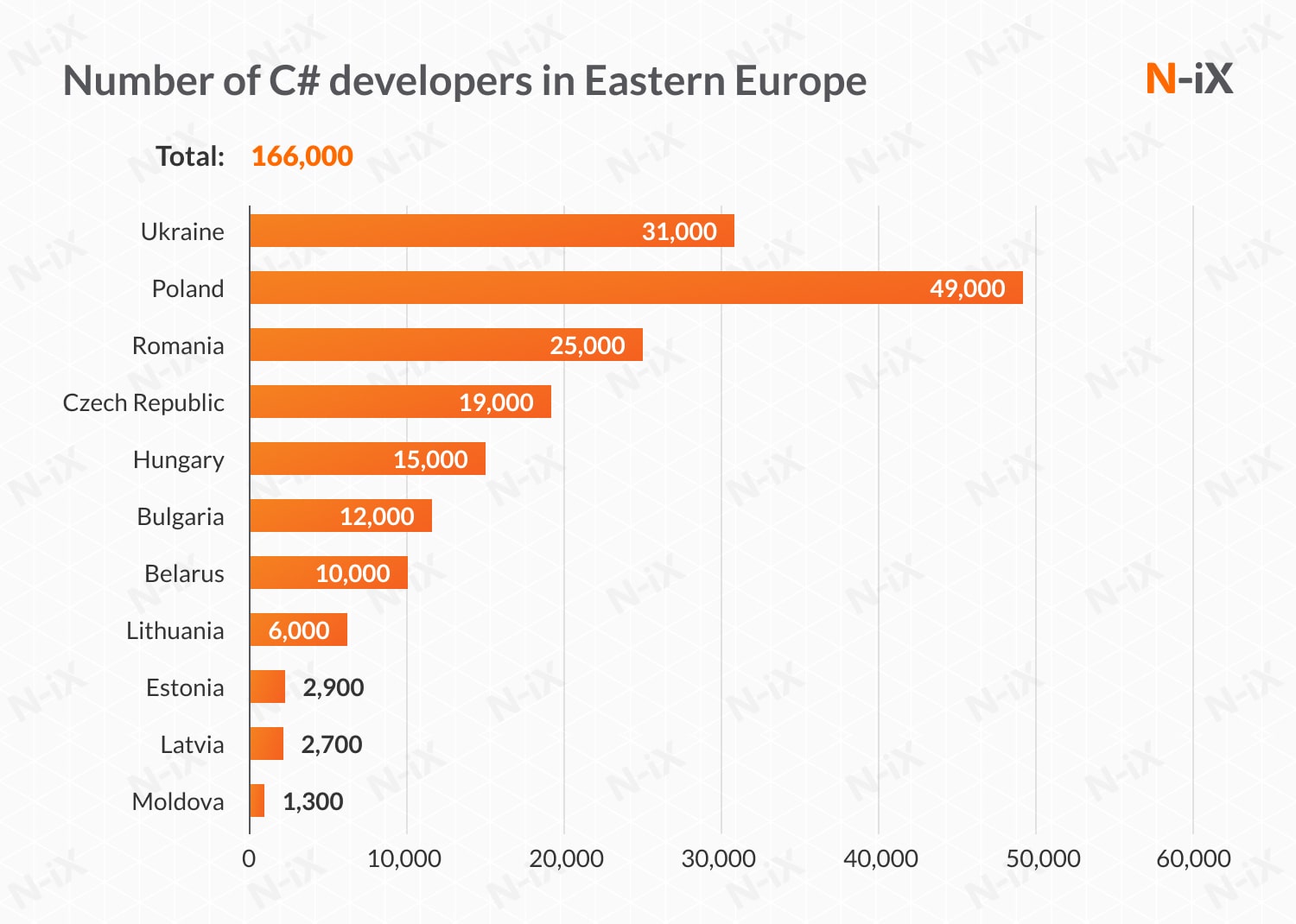 Why look for offshore .NET developers in Ukraine? 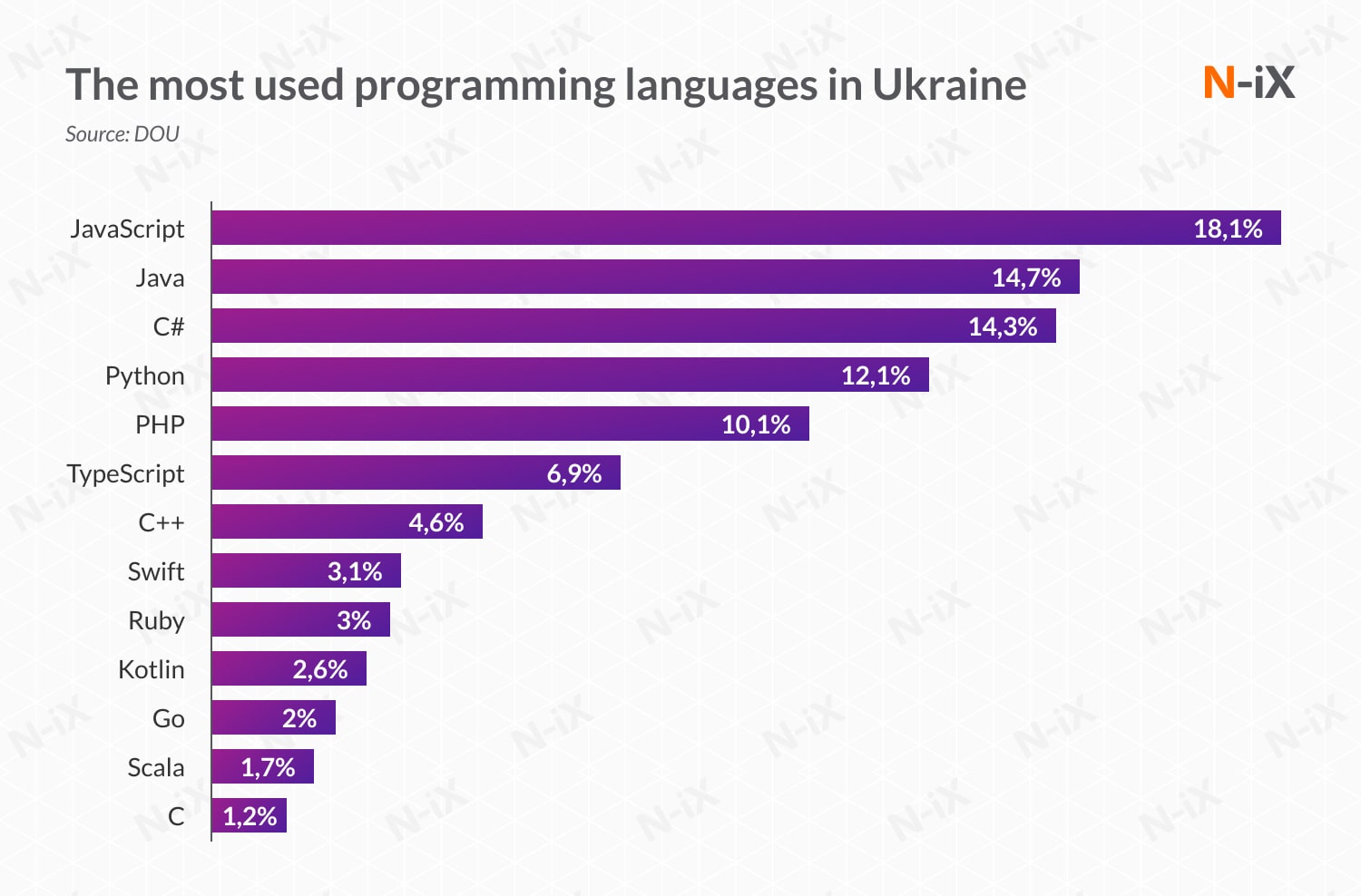 Ukrainian developers are recognized by different rankings due to their skills. For instance, Ukrainian professionals have made it to the 6th place in TopCoder Rating and to the 5th place, according to SkillValue.

Ukraine has a strong .NET community that helps foster professional growth and share knowledge. For instance, Ukrainian companies organize many .NET-related conferences, such as .NET fwdays, .NET FullStack Kharkiv, .NET Fest, .NET Conference,  IT Weekend Ukraine, and many others. There is a .NET community in Lviv that organizes events and meetups to ensure knowledge sharing among local .NET specialists.

Why look for offshore .NET developers in Poland?

According to the Bulldogjob report, almost half of Polish developers are familiar with C#. This language has made it to the top five most popular and used technologies in Poland. What’s more, 17% of developers consider C# as their favorite technology to work with. Java and JavaScript (also frequently used by offshore .NET developers) take first and second places with 28% and 24% respectively. 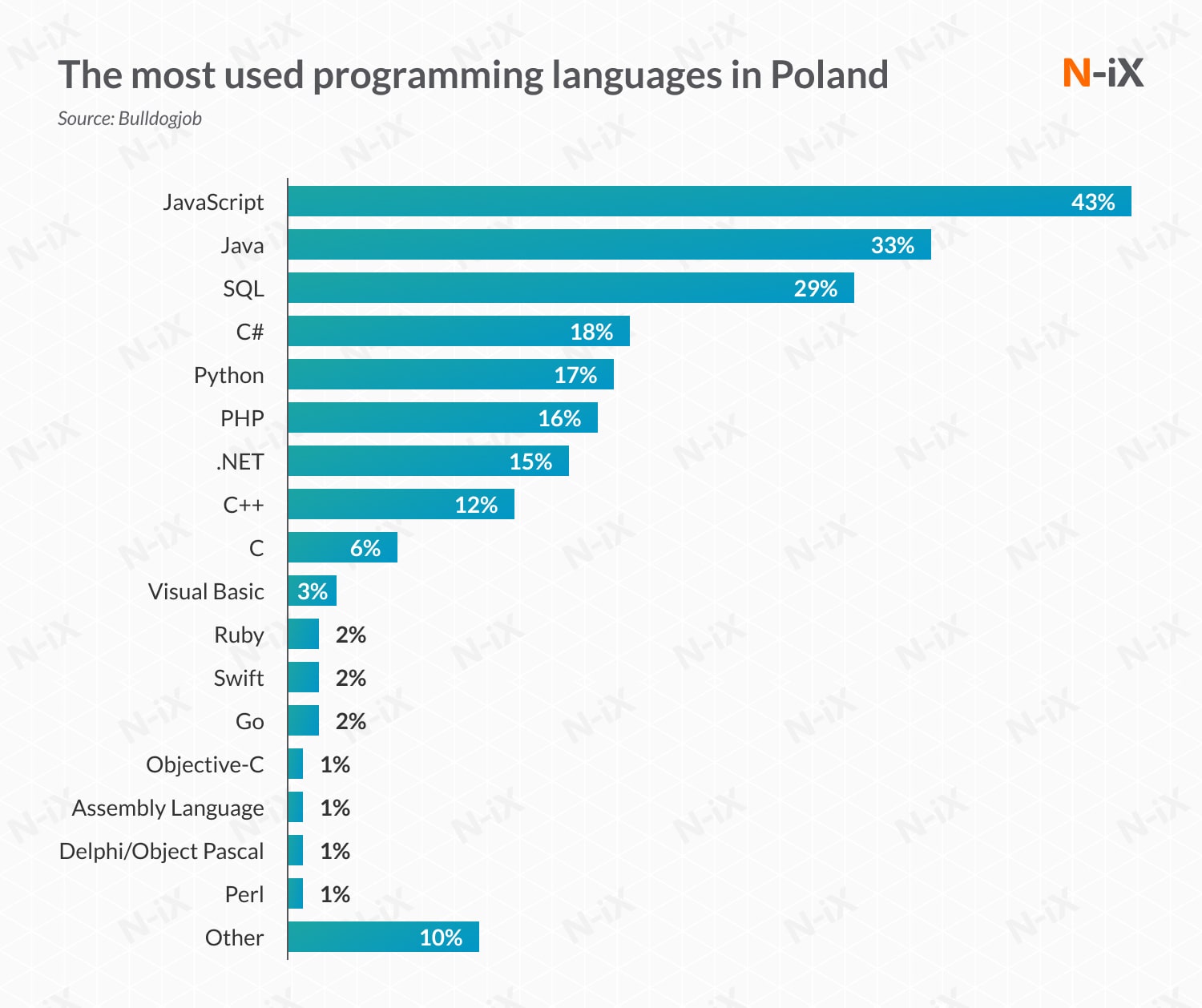 Poland boasts a skilled workforce: local professionals are recognized by different rankings. For instance, SkillValue lists Polish developers as the third most skilled in the world. According to TopCoder ranking, Polish developers are the fifth worldwide.

Why look for offshore .NET developers in Romania?

Romania is home to the third-largest number of developers in Eastern Europe: 119,100 professionals. Almost a quarter (25,000) of them are C# developers.

SkillValue describes Romania as a country with a large pool of engineers fluent in English and French. Romanian developers take 23rd place in the world, according to this ranking. TopCoder recognizes Romanian experts as the 20th most skilled worldwide.

Romania boasts a strong .NET community. The majority of .NET events take place in the cities of Iasi, Bucharest, and Cluj-Napoca, where the community has the most members. Such conferences as DotNet Iasi, .NET Romania, .NET conference by ApexVox are held in the country.

Ukraine, Poland, and Romania are the countries where you are most likely to find experienced and skilled offshore .NET developers. But what skills make a successful .NET developer? Let’s find out.

C# is the main programming language when it comes to the .NET framework. JavaScript and/or TypeScript are used for front-end development. What’s more, being familiar with one specific language (in most cases C#) is simply not enough to be a successful .NET developer, especially if you want to cover all parts of the deliverables.

ASP. NET and ASP.NET Core frameworks are crucial for building web applications. These frameworks offer benefits such as a unified story for building web UI and web APIs, the ability to run on Windows, macOS, and Linux, a lightweight, high-performance HTTP request pipeline, and many others. Basically, they make the development process more efficient.

With the help of the ASP.NET MVC pattern, .NET developers can make fast and secure web applications. The pattern allows offshore ASP.NET developers to decouple user interface (view), data (model), and application logic (controller). So, it helps to achieve separation of concerns, which gives the opportunity for test-driven development. Thus the development process gets easier.

A relational database is structured and has relationships (dependencies) with one another. For instance, a database for a school that contains separate tables for students and for class offerings.

A non-relational database is document-oriented, so all information is stored in more of a list order. For example, a database in which each customer has their own document that contains information, including name, address, order history, and credit card information. Despite different formats, all this data can be stored in the same document.

An experienced offshore .NET developer should know the pros and cons of three main cloud vendors: AWS, Google Cloud, and Azure and be able to tell which cloud has the best services for solving a particular task. Azure expertise is of utmost importance when it comes to .NET development, as it is also a Microsoft product, thus it is most frequently used with the .NET framework.

Also, your offshore .NET developers should have experience with cloud migration, as businesses frequently need it to achieve flexibility, scalability, automation, ease of collaboration, etc.

When it comes to full-stack development, your offshore .NET developers should have experience working with front-end frameworks, such as React and Angular.

This certification measures the ability to implement and monitor an Azure infrastructure. Also, it shows a developer’s competence in implementing management and security solutions, solutions for apps, as well as implementing and managing data platforms.

Why choose .NET over other technologies?

Microsoft promotes .NET, making the technology more efficient. .NET boasts a considerable community of people interested in updates and framework development. There are five major benefits of .NET over other frameworks and languages. Let’s view them in more detail.

The .NET framework is language-neutral, so offshore dot net developers can reuse the code multiple times to improve the effectiveness of the development process.

.NET Core is cross-platform which means that it is compatible with Windows, OS X, and Linux. As a result, software developers can build cross-platform applications, and port the already developed applications across different platforms.

Microsoft works a lot on the improvement of its cloud programming infrastructure – Azure Cloud. So, this cloud fits for building fast and scalable applications.

What’s more, .NET is designed to be built into Docker containers, which makes deploying applications to the cloud in a lightweight and effective way possible.

Due to the wide usage of the .NET framework, many tools that make work more efficient occurred. For example, Entity framework makes working with databases easier, Blazor allows writing both front-end and back-end using C#, and many others.

Lebara is one of Europe’s fastest-growing mobile virtual network operators (MVNO) with millions of active customers, employing over 62 nationalities worldwide in six countries. N-iX has been working with  Lebara since December 2014, having built a development center that consolidates broad expertise — software development, quality assurance, business intelligence development and operations, application support, database administration, infrastructure support — everything in one place.

What concerns software development, Lebara needed a team of specialists to perform a wide range of solutions.

First of all, we migrated from on-premises WCF and BizTalk to Azure. Our specialists developed a single master data system for offline and online communication channels that enables omnichannel. Omnichannel is a single backend for all the channels of communication with Lebara customers: website, mobile app, SMS, USSD (unstructured supplementary service data), and customer service.

Customers can buy, register or activate the SIM, buy and change plans (data, bundles SMS), top-up or configure the auto top-up, check the balance, access the online support to receive the answers to the most frequently asked questions. It’s a set of 80+ microservices that encapsulate the business logic and integrations with payment providers, OCS, MNO, and regulators.

The next phase of our cooperation was the migration from Azure Service Fabric to Azure Kubernetes Services, which also involved:

Code Worldwide is a digital transformation business that helps clients invent a new future for their marketing through technology and data. The client engaged N-iX to support the system, set up effective communication between services, and ensure their stability.

Our team is using DDD, CQRS approaches. Currently, there are over 200 microservices created in .NET 4.7 and around 10 microservices in .NET Core. Together with the client, the N-iX team developed an API with ASP.NET WebAPI. We use a set of tools (like Swagger) to follow the Open API 3.0 specifications.

Solution architecture is complex and flexible. It uses event sourcing as the main way to store and process application data. The N-iX team improved system stability and issue resolution time by introducing Log4Net logging with Azure App Insights statistics tracking. It allowed us to decrease the amount of work needed for platform stabilization by 60 percent per release.

Some not tenant-specific parts of the application are implemented on Serverless using .NET Core 3.1 and AWS Lambda. Our team was the first one to create serverless components in the platform, creating the full flow of development and CI/CD setup.

As a result of the cooperation, the client achieved:

RateSetter is a leading peer-to-peer lending company in the UK and Australia, offering services to thousands of active customers, and has matched more than £3,6 bn. RateSetter addressed N-iX at the point when they already had a well-established business model and over 250,000 active customers.

The main challenge of the project was to produce new features during migration to microservices.

As a starting point for migration, our team took a new project for the borrower journey that includes the creation of a new UI and logic update that maintains the user application. During which we designed the concept of future microservices architecture. Also, to avoid huge data migration, we decided to use proxy services at the beginning to access the data. In the scope of this project, the first 10 services were created. Additionally, the basic template for the service and migration process was introduced to the whole development team.

Our specialists migrated from classic .NET Framework 4.7 to Service Fabric in regards to PaaS, which is using .NET Core. Thanks to the new architecture, all the services can be deployed and updated independently, which gives more flexibility. Now there are over 70 microservices. 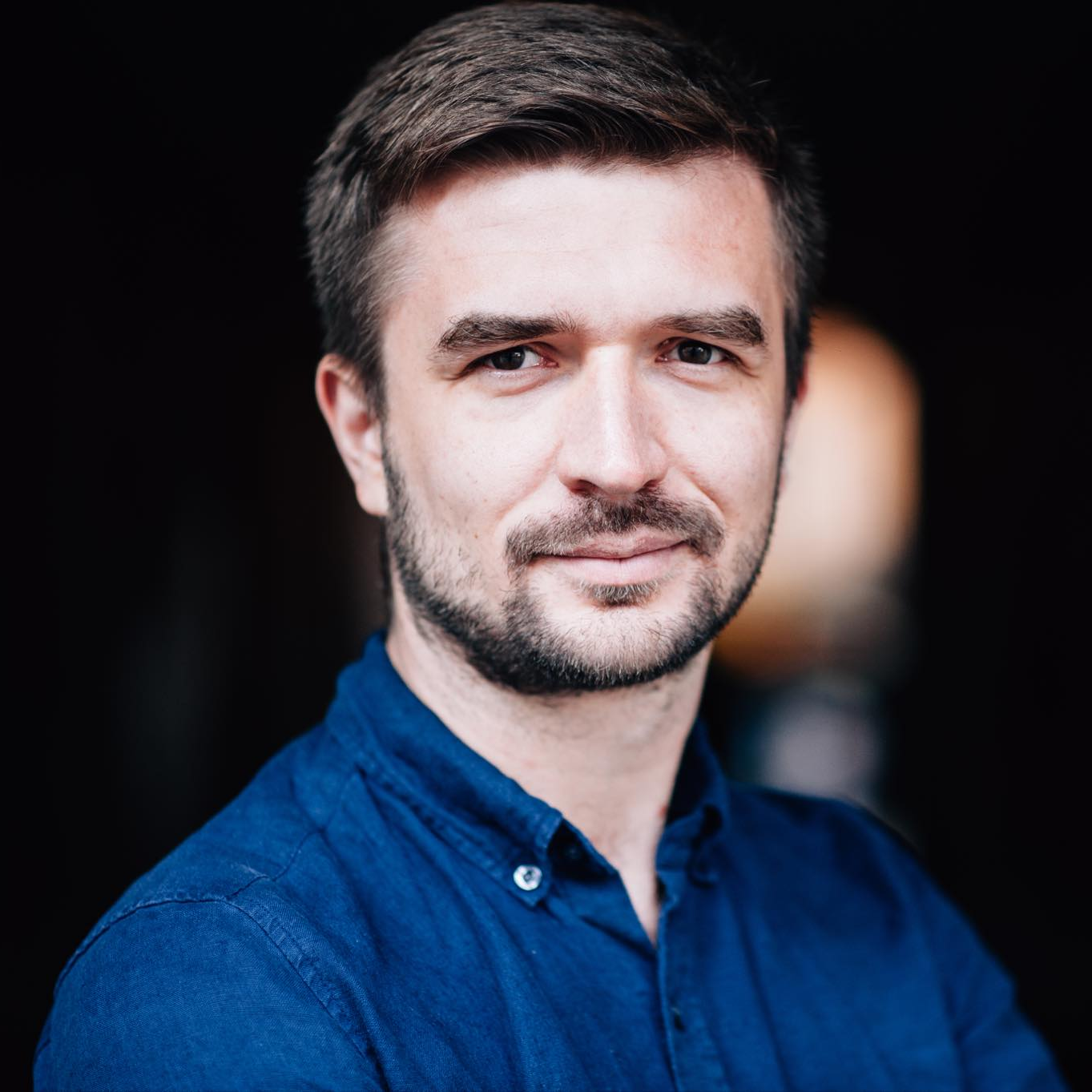 10 December 2019
.NET development in Ukraine: how to benefit from nearshore services
.NET has had continued popularity over the last 10 years [1], and many companies have leveraged it to ensure the efficiency of their deliverables. However, both the UK and Europe are currently experie...

18 May 2019
.Net development outsourcing: Is this the right choice?
Ever since Microsoft released new versions of .Net, the framework has soared in popularity. The number of .Net projects has gone up. However, Europe faces an acute shortage of experts. Thus, to ensure...