How to partner with the best dedicated developers

Hiring skilled developers in-house is a complicated process that requires time, effort, and overhead costs. As a result, many businesses choose to hire dedicated developers. And here is why:

Although the benefits of such a partnership are tempting, you have to consider a few important aspects to find, hire and establish successful cooperation with dedicated developers. Let’s start with the essential rules you should follow when you hire dedicated developers.

How to find the best dedicated developers?

Look for offshore or nearshore destinations

According to LinkedIn, as of February 2021, the US job market had over 78,000 unfilled vacancies for software developers. In the EU, this figure amounted to almost 50,000 open jobs.

As a result, the market is experiencing fierce competition for talent. It takes on average 6-12 weeks to find a professional developer. What’s more, the UK, the USA, and the EU rates are much higher than in outsourcing countries, such as Ukraine or Poland, for example.

So, to save both time and money, many companies including Skype, Mercedez, Bosch, Lebara, Fluke Corporation have already opted for outsourcing their software development to nearshore and offshore destinations, and most of them chose Eastern Europe.

Where to look for dedicated developers?

Eastern Europe is one of the most attractive outsourcing destinations. The key reasons are a vast talent pool of 1M developers, reasonable pricing, and high quality of IT services.

Over 60% of the tech talent resides in Ukraine, Poland, and Romania. So, we will scrutinize these countries, considering such aspects as tech education, skills of the local professionals, rates, and others.

Where to hire dedicated developers: Ukraine

Over 30% of Ukrainian outsourcing companies are mid-sized and large vendors. What’s more, Ukraine houses 18 tech companies, recognized by the IAOP. By comparison, Poland is home to one IAOP-listed company.

The IT export in Ukraine amounts to $4.5B, one of the most significant numbers in the region. What’s more, software development outsourcing has over 20% share of all Ukrainian service exports.

Due to COVID-19, most IT vendors work remotely. As a result, developers no longer have to stick to one city. Nevertheless, five major IT hubs remain unchanged. DOU states that 80% of Ukrainian developers live in Kyiv, Lviv, Kharkiv, Dnipro, and Odesa. 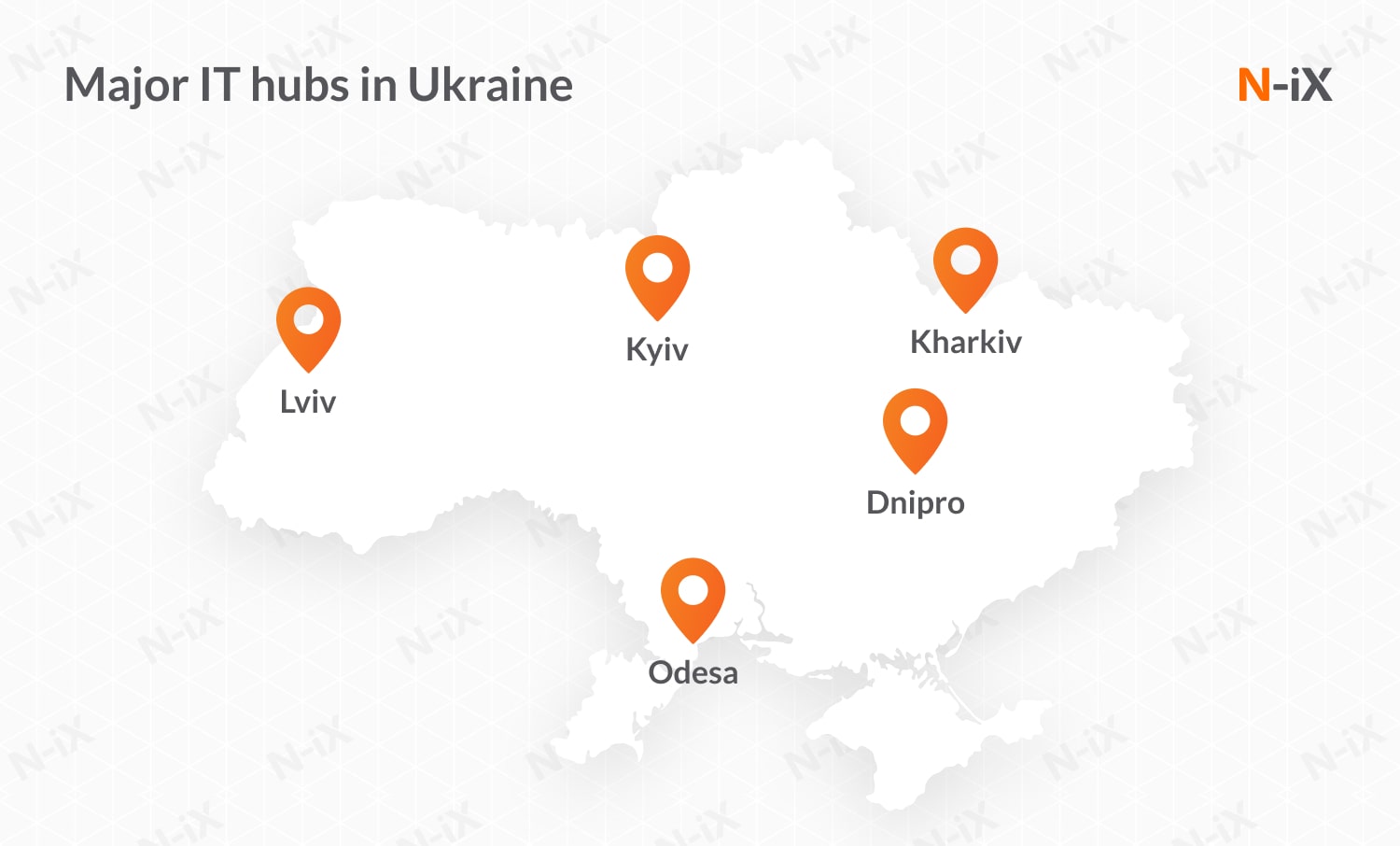 Ukraine houses the second-largest IT talent pool in the region. The country is home to over 192,000 software developers.

The most used programming languages in the country are JavaScript, C#, .NET, Java, PHP, and Python. 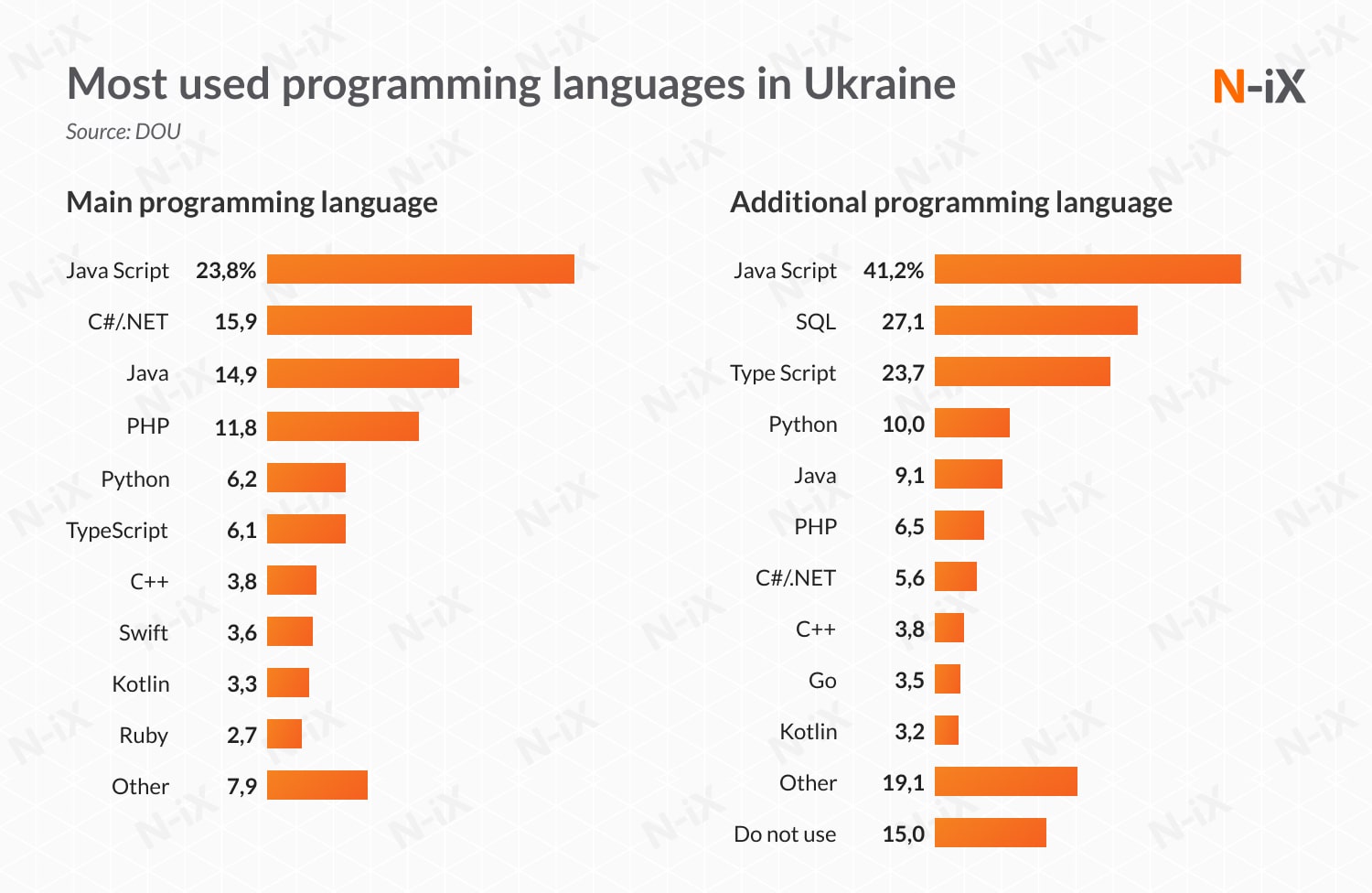 According to the DOU survey, 81% of Ukrainian developers have intermediate and higher English proficiency levels. The higher is the position - the more advanced level is.

Rates of the developers depend heavily on the cost of living in a certain country. As a result, the cost of outsourcing to Ukraine is lower than to other Eastern European countries, such as Poland, Slovakia, Romania, etc.

Where to hire dedicated developers: Poland

Warsaw, Krakow, Lodz, Katowice, Wroclaw, Tri-City, and Poznan are known as major IT hubs in Poland. However, the first two cities are home to the lion’s share of Polish software developers for hire. 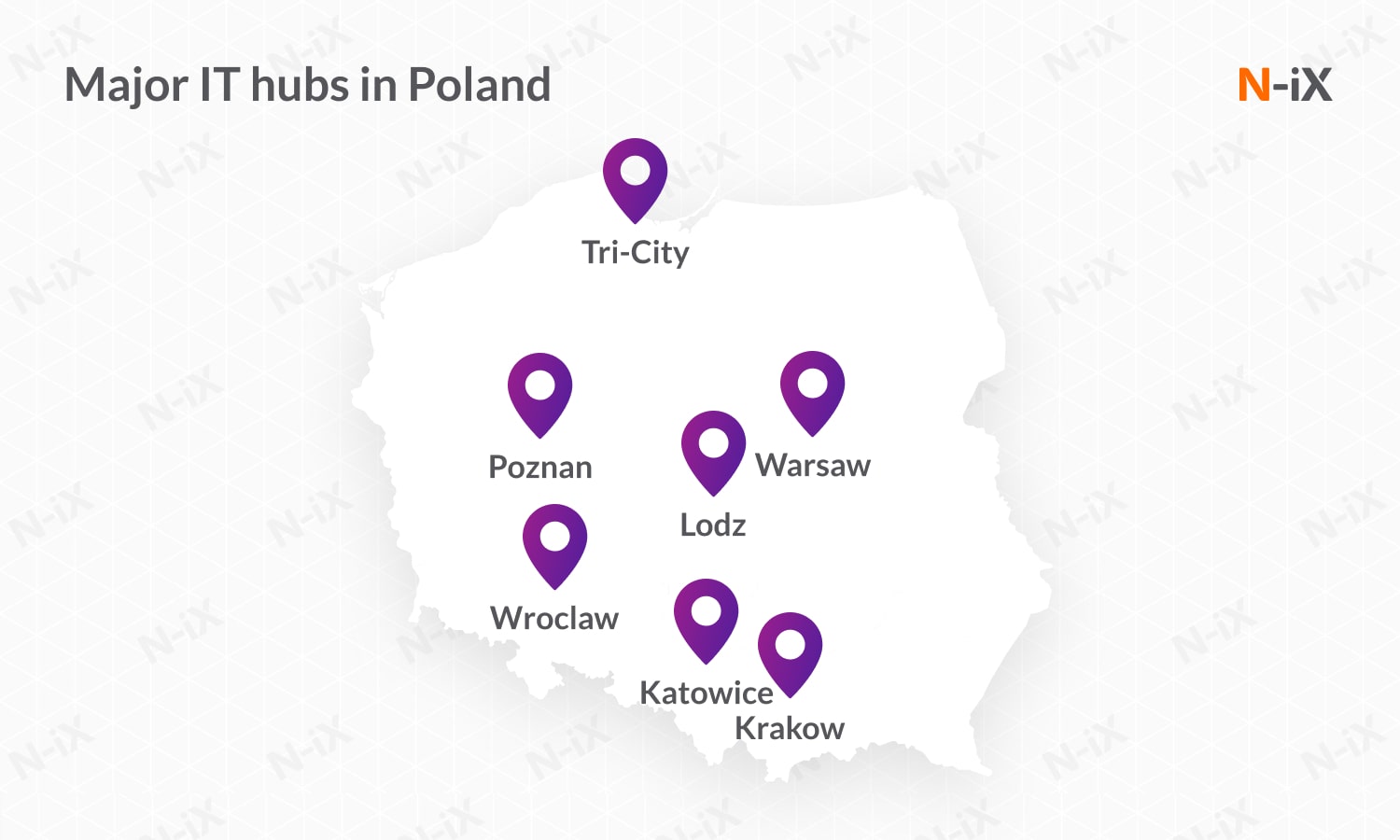 Poland is home to the most significant talent pool in Eastern Europe - 295,000 professional developers. However, 40% of Polish tech experts work in the BPO sector, thus are not available for outsourcing.

Polish developers boast a strong educational background: 60% of them have a university degree, as stated by Bulldogjob. This is a Polish IT-related source that conducts surveys, post tech vacancies, etc.

According to Bulldogjob, 68% of software engineers here use JavaScript in their projects. Other popular programming languages are Java, C++, SQL, and C#.

Poland is a country with a high English proficiency level. This is the language spoken by all tech experts, as Bulldogjob states. 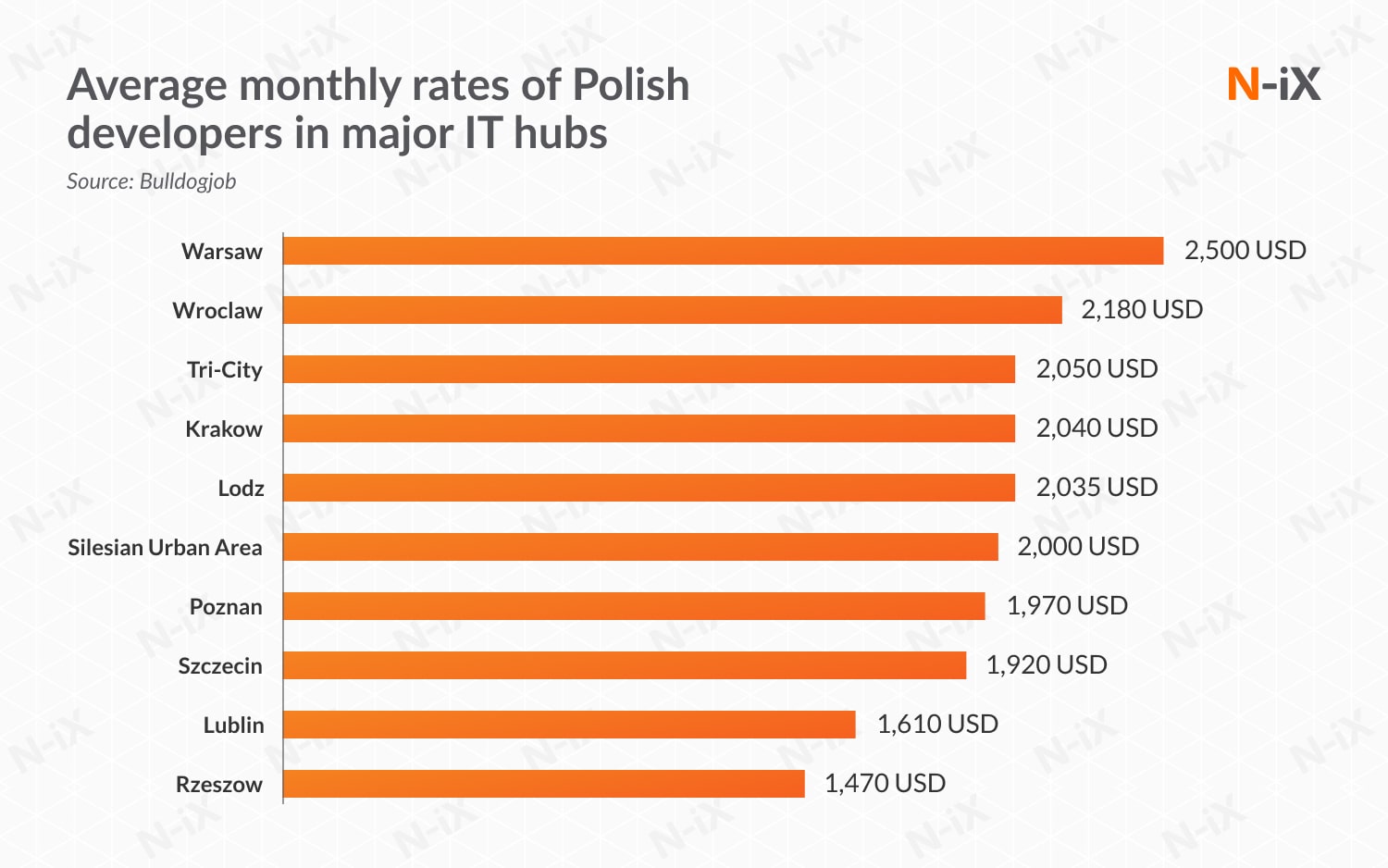 Where to hire dedicated developers: Romania

If you are searching for software developers for hire in Romania, cities like Bucharest, Cluj-Napoca, Timișoara, and Iasi are the best locations for that. 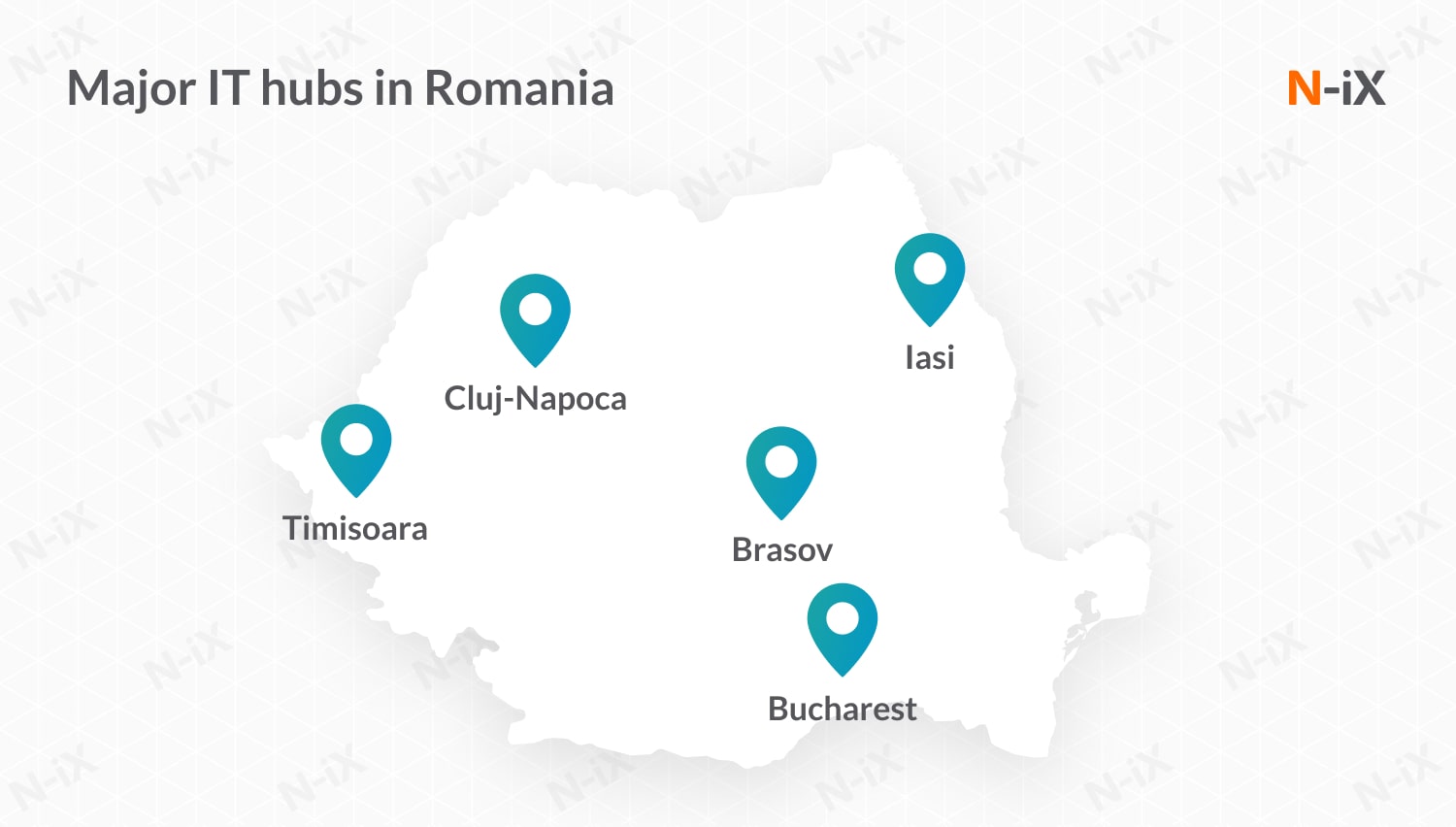 Romania is the third biggest country in Eastern Europe in terms of the tech talent pool. Over 119,000 software developers live here.

JavaScript, SQL, and PHP are the most widely used programming languages in Romania.

Check out this article to learn more about Romanian developers.

The EF English Proficiency Index lists Romania among the countries with a high English proficiency level.

The city, position, and years of experience influence the rates of software developers for hire in Romania. However, on average, tech professionals here make around $25-49 per hour.

But how to choose the right vendor that will provide top talent for your project? Let’s find out.

How to choose a trusted vendor to hire dedicated developers?

Here are the key steps that will help you to choose a trustworthy IT outsourcing partner:

Pay close attention to the legal aspects of cooperation with your dedicated developers and ways. Learn how to sign a win-win contract here.

Now, let’s take a look at some examples of businesses that have chosen to hire dedicated developers and benefited from the partnership.

Companies that benefited from cooperation with dedicated developers

Lebara is a European telecom company that boasts 5M customers worldwide. Back in 2014, the company needed a vendor to help with their digital transformation program. After a thorny selection process, Lebara has chosen N-iX as their partner.

Our dedicated developers have helped the client with big data and cloud solutions, migration to microservices, omnichannel e-commerce, and more.

This company is a global Global Fortune 100 technology company based in Germany.

As a leading technology and services supplier, the company has many factories, warehouses, and suppliers, as well as raw materials and finished goods, which circulate among them. They needed to improve the logistics between 400+ warehouses and thus introduced an internal logistics platform.

The platform, however, turned out to have a lot of flaws and was unsuitable for further scaling.  N-iX dedicated developers have helped the company migrate the monolithic architecture of the platform to microservices, adopt best DevOps practices, develop a computer vision solution and a multi-platform CV mobile app for it, and more.

RateSetter is a UK- and Australia-based peer-to-peer lending company that has over 250,000 active customers. Back in 2016, they partnered with N-iX to modernize their product.

Initially, they hired a small team working for RateSetter, and the project has extended to 36 dedicated developers.

N-iX experts have enhanced the quality of the product, as well as the scalability of the solution, ensured the security of the customers’ personal data, and decreased time to market.

Why hire dedicated developers at N-iX?

07 May 2020
Where to hire a dedicated development team: Poland vs Ukraine
Central and Eastern European countries have been gaining increasing recognition among the UK, the US, Western European companies that outsource their software development. This region has a compelling...