IT industry in Ukraine: overview of major IT hubs

The IT industry in Ukraine engages more than 180,000 people, according to the State of European Tech report 2018. Who are these professionals? Where do they live and work? Let’s find out what is the current state of the IT market in five major IT hubs in Ukraine.

The piece is based on the IT market report recently published by N-iX.

Let’s take a look at the cities that contribute the most to the IT industry in Ukraine.

What are the Major IT Cities in Ukraine?

As reported by DOU, the vast majority of Ukrainian IT specialists (67%) live in Kyiv, Kharkiv, and Lviv. In the article, we will cover Dnipro and Odesa as well.

Major IT companies in Ukraine, including N-iX, have offices in the biggest tech hubs to attract the best talent. 43 out of the 50 largest Ukrainian IT companies have development centres in the capital. 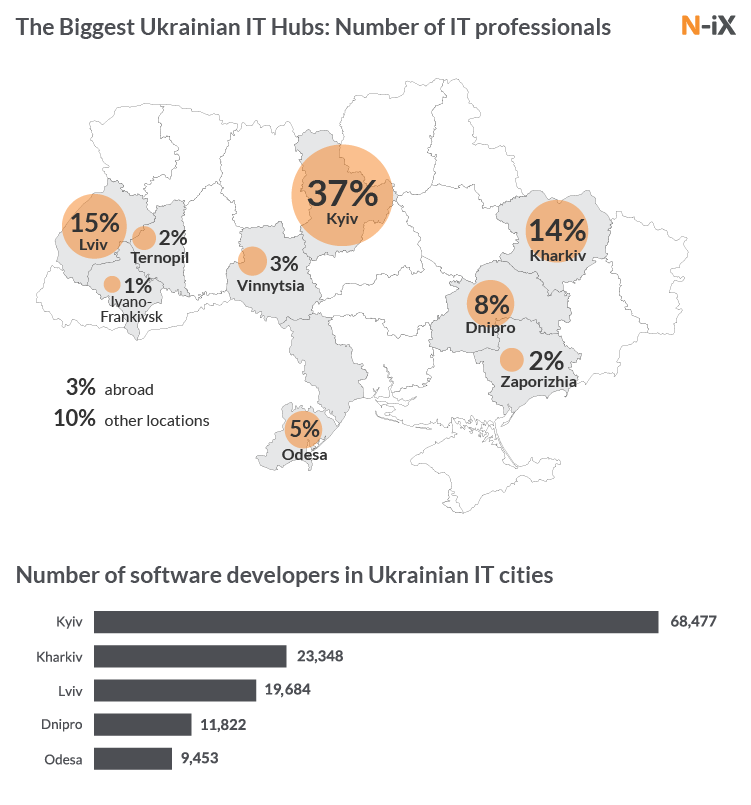 Kyiv and Lviv are primary destinations for IT outsourcing to Ukraine. The cities are home to over half of all Ukrainian developers.

The most widespread programming language in Ukraine is Java. According to LinkedIn, almost 5K of Java developers work in Lviv, with the total number of 27K.

IT MARKET IN KYIV

Kyiv is a major administrative, cultural, and scientific centre of the country. No wonder that the biggest number of IT specialists (40%) work in the capital. Kyiv can boast of many software outsourcing firms and startups.

Here are a few reasons for this:

Moreover, three out of 12 Ukrainian universities with best technical programs (according to DOU), are located in Kyiv. Thus, the talent pool keeps expanding even further.

Kyiv is one of the fastest-growing cities in the country. This is the reason why world enterprises, such as Samsung, Huawei, Ericsson, NetCracker, and many other global companies have R&D centres in the city.

Furthermore, many companies are outsourcing software development to Kyiv. The biggest Ukrainian IT companies, including N-iX, have large development centres in the capital.

Many successful tech startups also have offices in the capital, including Grammarly, Petcube, Terrasoft, Augmented Pixels, and others.

All these factors drive the growth of Kyiv IT sector.

IT MARKET IN LVIV

Lviv is the largest city in Western Ukraine with the population of over 800,000 people, and more than 20,000 of them work in the IT industry. According to State of European Tech, the majority of Lviv software developers work for either outsourcing (46%) or outstaffing (11%) companies.

The city has a beautiful architecture with a lot of historical buildings included in the UNESCO World Heritage List. Lviv City Council states that 2,2M tourists visited the city in 2018 and this figure grows every year.

Tourism, mechanical engineering, and IT are the three most developed spheres in Lviv. The city takes third place in Ukraine by the number of programmers. Average Lviv developer is 28 years of age with over 3 years’ experience.

Speaking of software development in Lviv, 317 IT companies are based in the city. Most of them provide software outsourcing services to clients in the USA, Western Europe, the UK, the Nordic countries, and other locations. In 2018, about 14,000 students studied at universities with tech programs, so the industry has a constant inflow of fresh talent.

Ukrainian Catholic University and Ivan Franko National University of Lviv from the DOU ranking of best Ukrainian universities are situated in Lviv.

Moreover, a lot of IT conferences take place in Lviv. For instance, IT Arena - the biggest IT event in Ukraine- gathers up to 4,000 IT specialists both from Ukraine and abroad.

IT MARKET IN KHARKIV

Situated in the north-east of the country, Kharkiv is the second-largest city in Ukraine with almost 1.5M citizens. The city is one of the most industrialized in the whole country. Due to its long-established engineering tradition, well-developed machinery and electronics industries, it is a big business hub.

All of them graduate highly skilled technical professionals.

Software outsourcing is a well-developed industry in Kharkiv. There are over 25,000 IT specialists in the city and around 450 active tech companies. The USA is the largest export market for Kharkiv IT companies, as it constitutes almost 65% of all IT export.

IT MARKET IN DNIPRO

Dnipro is another big IT hub in Ukraine. It is home to almost 12,000 IT specialists.

Speaking of the IT service industry in Dnipro, there are more than 170 IT companies. 41% constitute middle engineers and 36% - senior developers, so the city has a lot of experienced IT talent.

IT MARKET IN ODESA

Odesa is the fifth most populated city in Ukraine. It is a major tourist centre, a seaport, and a transportation hub located on the northwestern shore of the Black Sea.

The software outsourcing sector plays an important role in the city's economy. According to DOU, the number of IT specialists has grown from 6,000 to 10,000 people in recent years. The city’s strong educational system ensures a constant inflow of new talent into the sector.

The majority of Odesa software developers work in 150 IT companies this city houses.

Ukraine is known worldwide as a major IT outsourcing destination for many reasons, such as experienced and well-educated talent, a favourable geographical position, and cost-effectiveness.

Kyiv, Lviv, Kharkiv, Dnipro, and Odesa are well-established tech hubs with a great number of software developers. These cities have both experienced professionals and a constant inflow of new skilful talents thanks to the strong educational system.

If you would like to find out more about the IT industry in Ukraine, feel free to contact our experts.

23 January 2020
Kyiv developers: exploring the biggest IT hub in Ukraine
Kyiv has a well-deserved reputation as an excellent IT outsourcing destination. Thanks to the abundance of highly skilled developers, geographical proximity to Western Europe, and vibrant business env...