Technology powers modern business, changing the way we think about it. From transportation to banking, from shopping to agriculture, tech solutions are changing the world. And the more companies rely on tech solutions, the fiercer the battle for tech talent gets. Staffing locally and in-house recruitment are no longer an option, especially when you need to access a large number of experts or dip into new expertise. So the question is where to outsource software development.

This article discusses three main outsourcing destinations such as Eastern Europe (EE), Latin America (LatAm), and Asia in terms of:

Market size and the number of professional developers

Eastern European countries have a combined tech talent pool of almost 1M professional developers with over 50K ICT graduates entering the market every year. Ukraine, Poland, and Romania have the most significant number of software developers (between 110K and 280K).

On top of that, Eastern Europe is also known for a high level of qualifications and engineering skills of software developers. 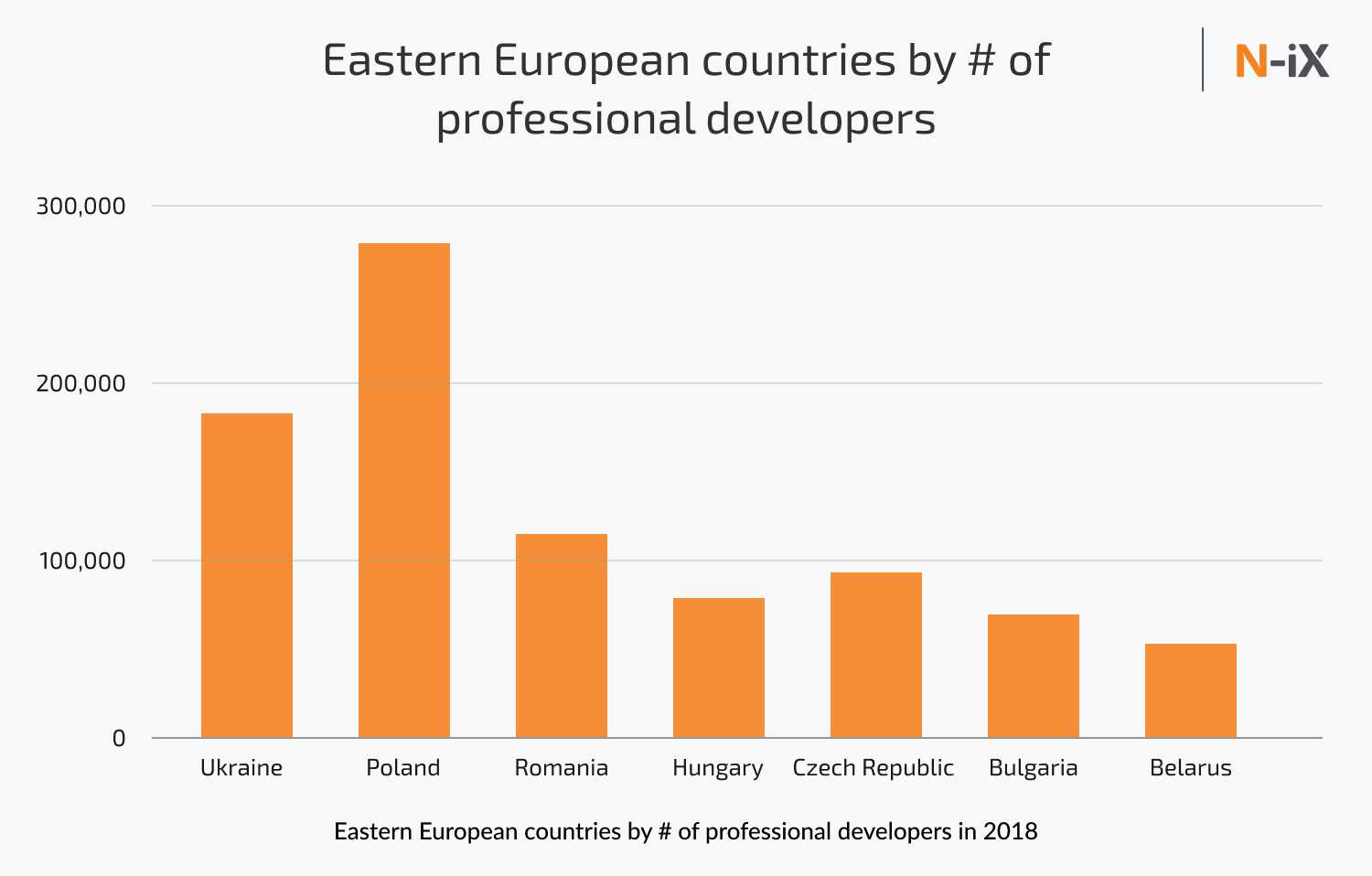 The Asian tech talent pool reached almost 4M in 2018. The top 3 countries with the largest number of professional developers are India (2.75M), China (590K), and the Philippines (190K). 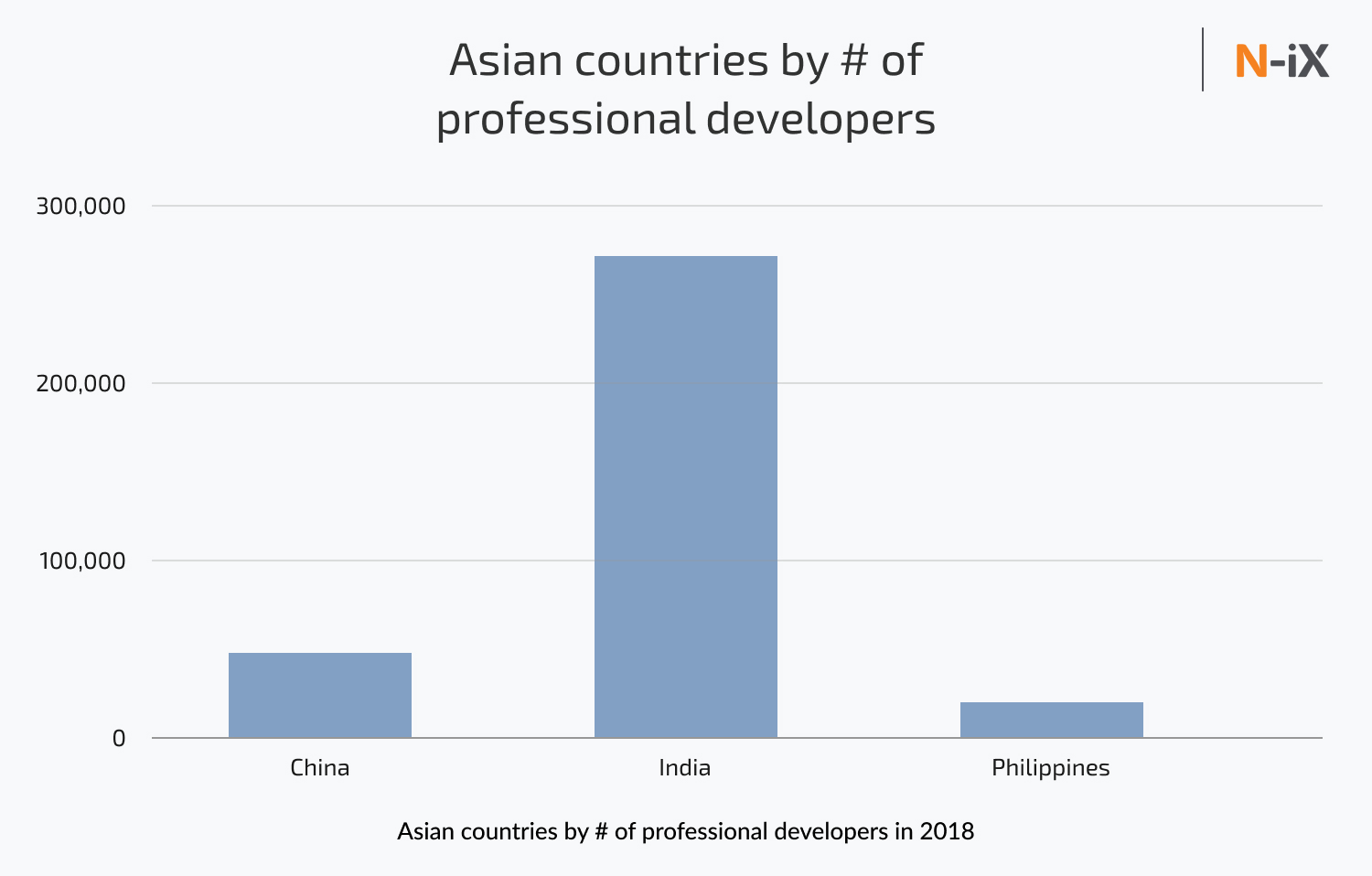 Among the Latin American countries, the best outsourcing countries by the number of professional developers are Brazil, Argentina, and Mexico. 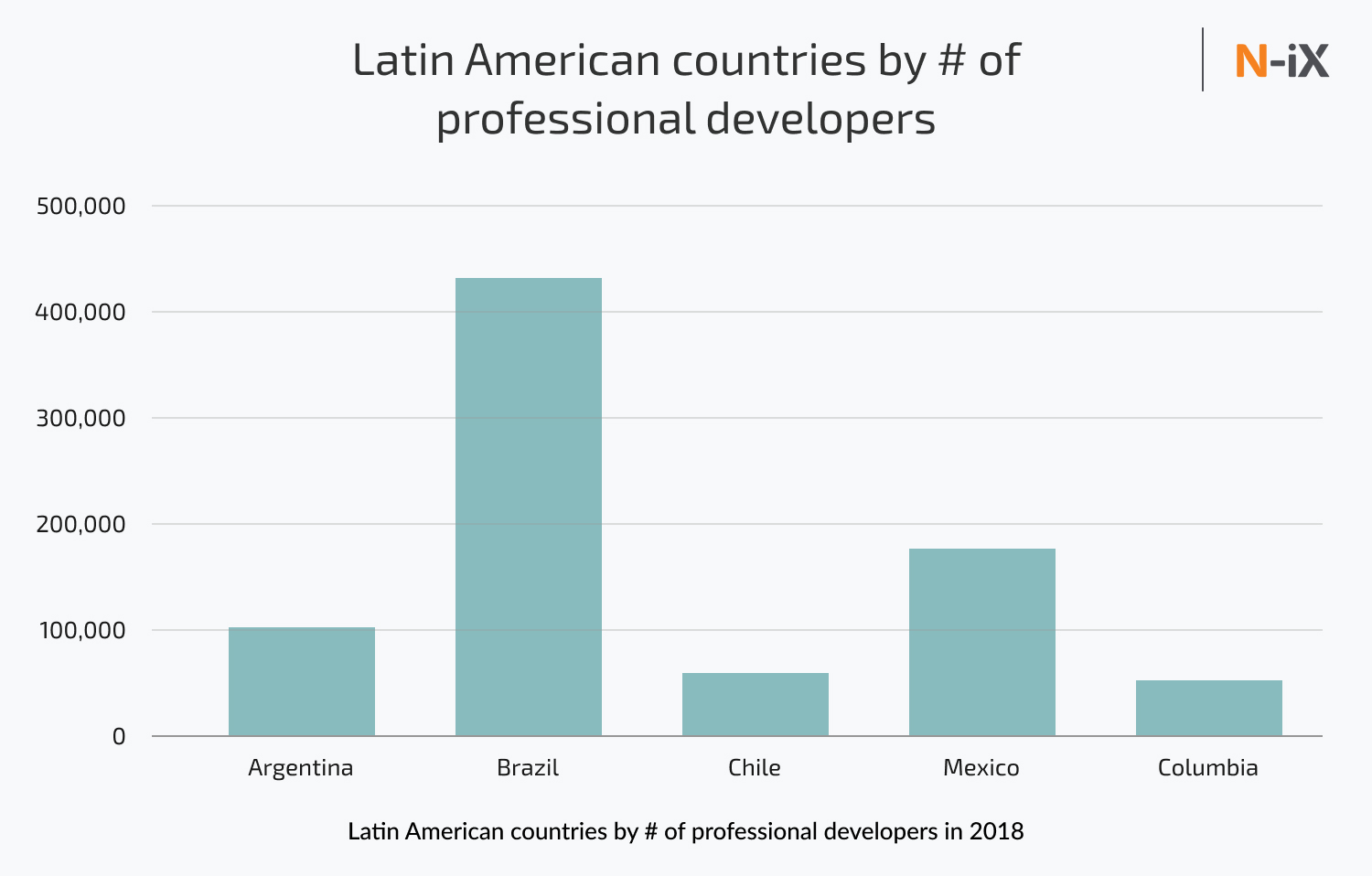 Education and qualification of the offshore software developers

Apart from the availability of tech talent, it is essential to pay attention to qualifications, tech education, and overall programming skills.

The 2018 ranking shows that among the three discussed regions, Eastern Europe has the greatest number of top-notch universities. Thus, the access to education (and tech education in particular) is better in EE countries. 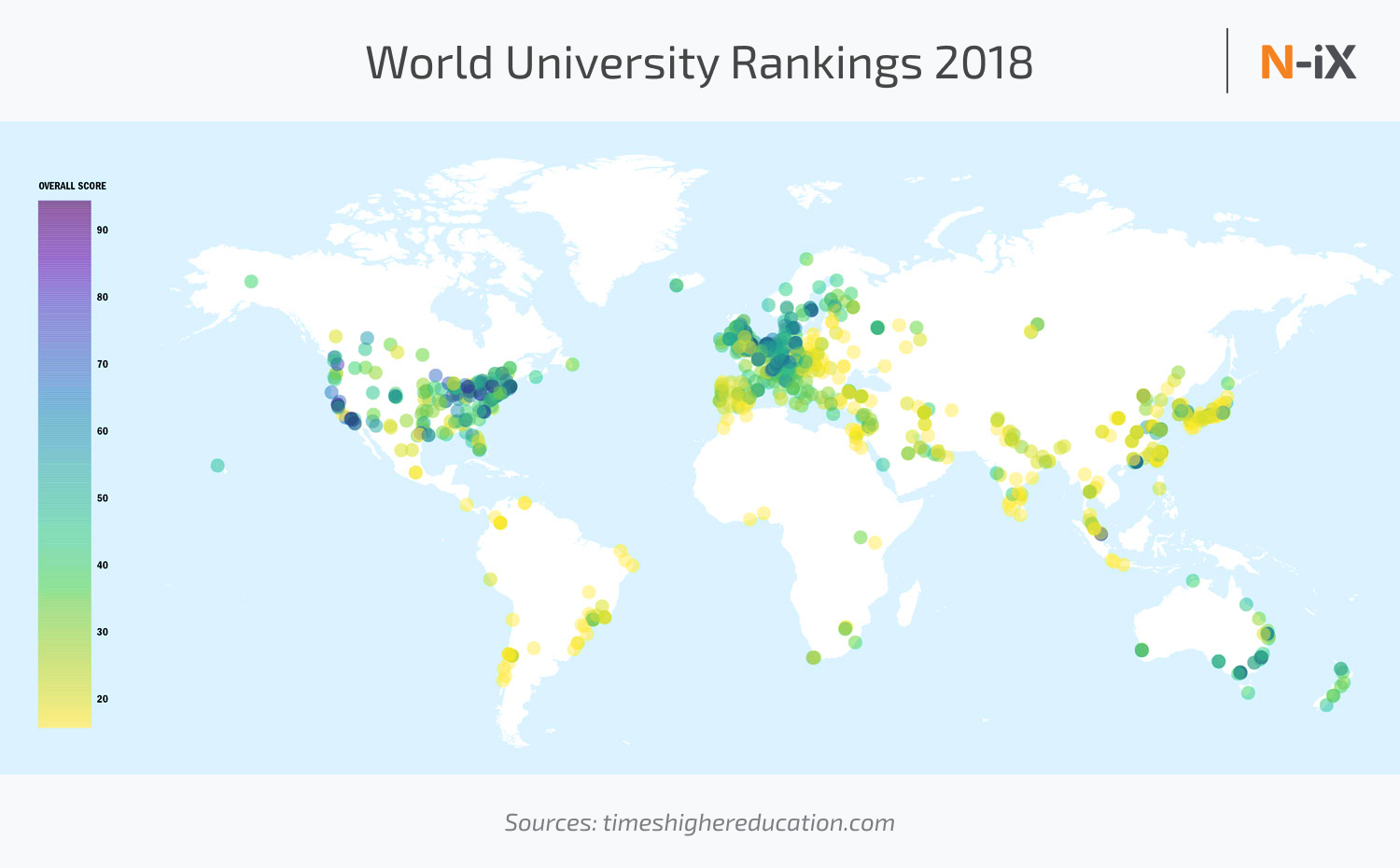 Also, Eastern Europe has an average 99.65% literacy rate, whereas in Latin America this score reaches 95.7% and in Asia - 90.6% (primarily because of India).

This ranking shows that China scored the honourable 1st place, while Eastern European countries took positions 3 through 20. On the contrary, Latin American countries reached as high as the 27th position (Chile) all the way to 45th (Colombia). 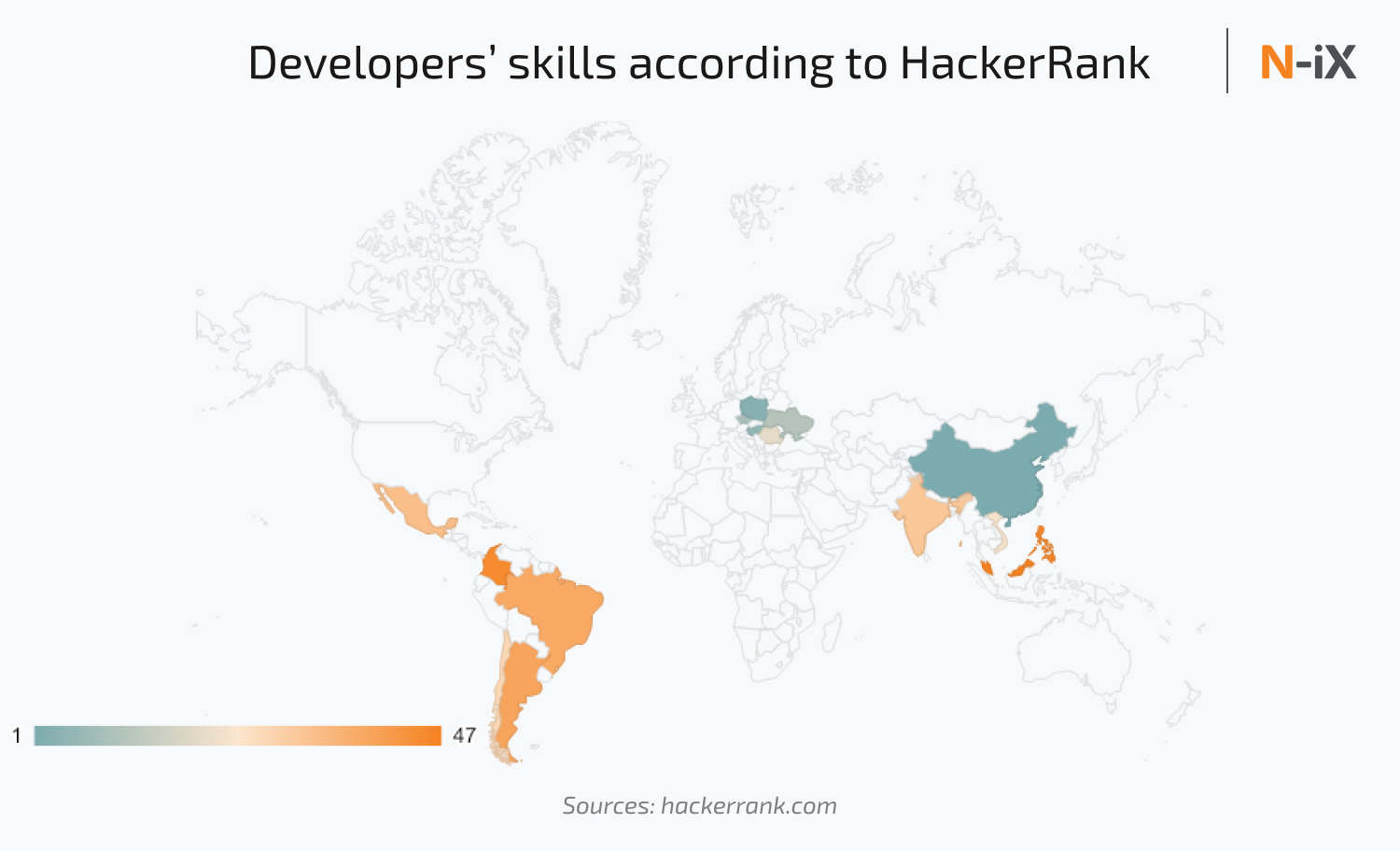 In this ranking, we can see that among the Asian countries, only Chinese developers have reached significant results. Eastern European countries have great results that vary between 5th and 26th position. Brazil, Argentina, and Chile have more modest results but still made it to the list. 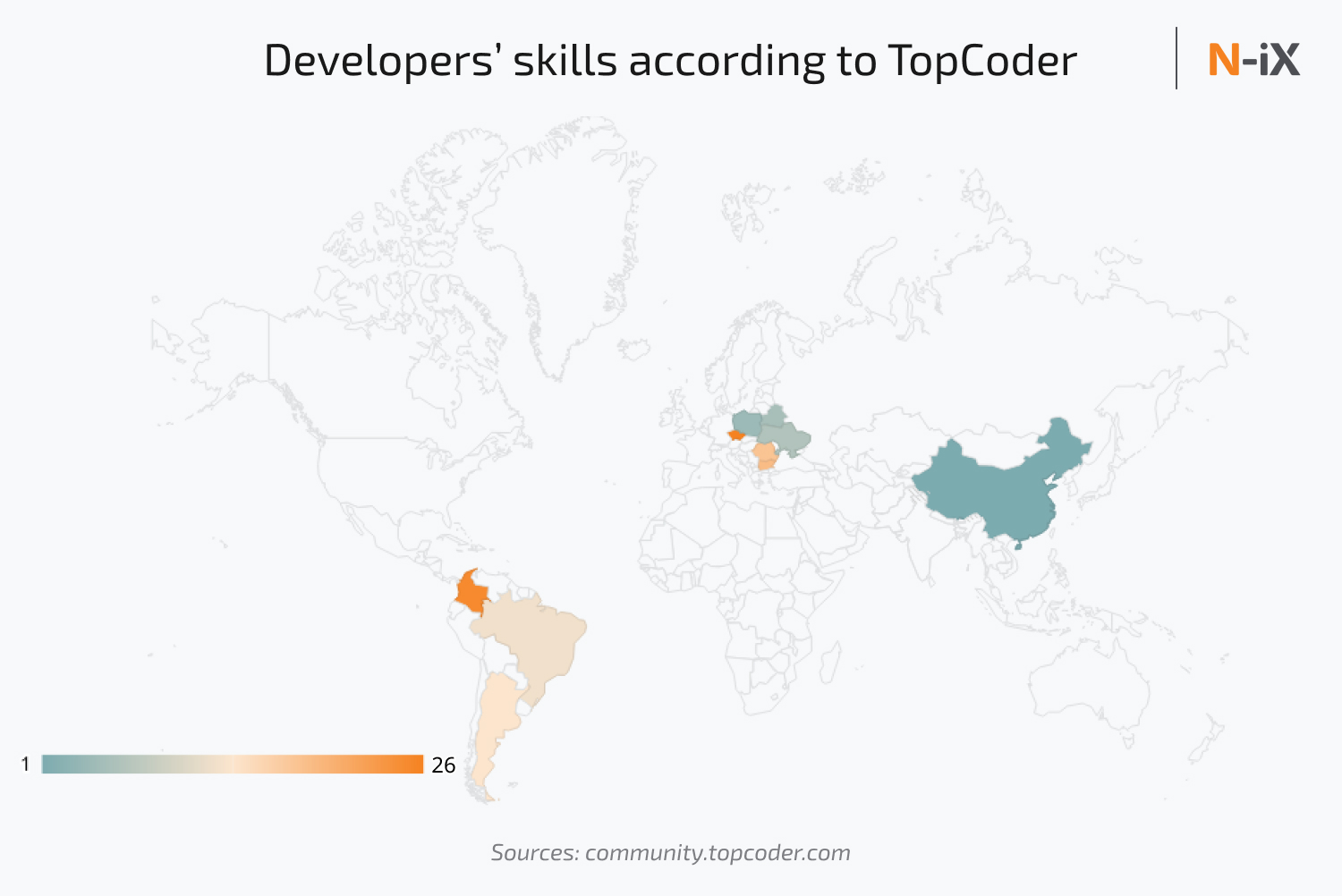 So while choosing where to outsource software development, it might be helpful to consider the educational background of developers from this country/region.

Every outsourcing region is known for its expertise in a specific technology or tech stack. For example, Central Asia, and India, in particular, are known for the prevailing number of PHP developers, as many companies outsource web development there. East Asian countries have substantial expertise in mobile app development. China, as the country with the largest population in the region and closed tech ecosystem, requires the development of their own apps and systems like WeChat, RenRen, Weibo, and even their own search engine (Baidu). LatAm countries are known (among others) for their expertise in .NET./Azure and WordPress. 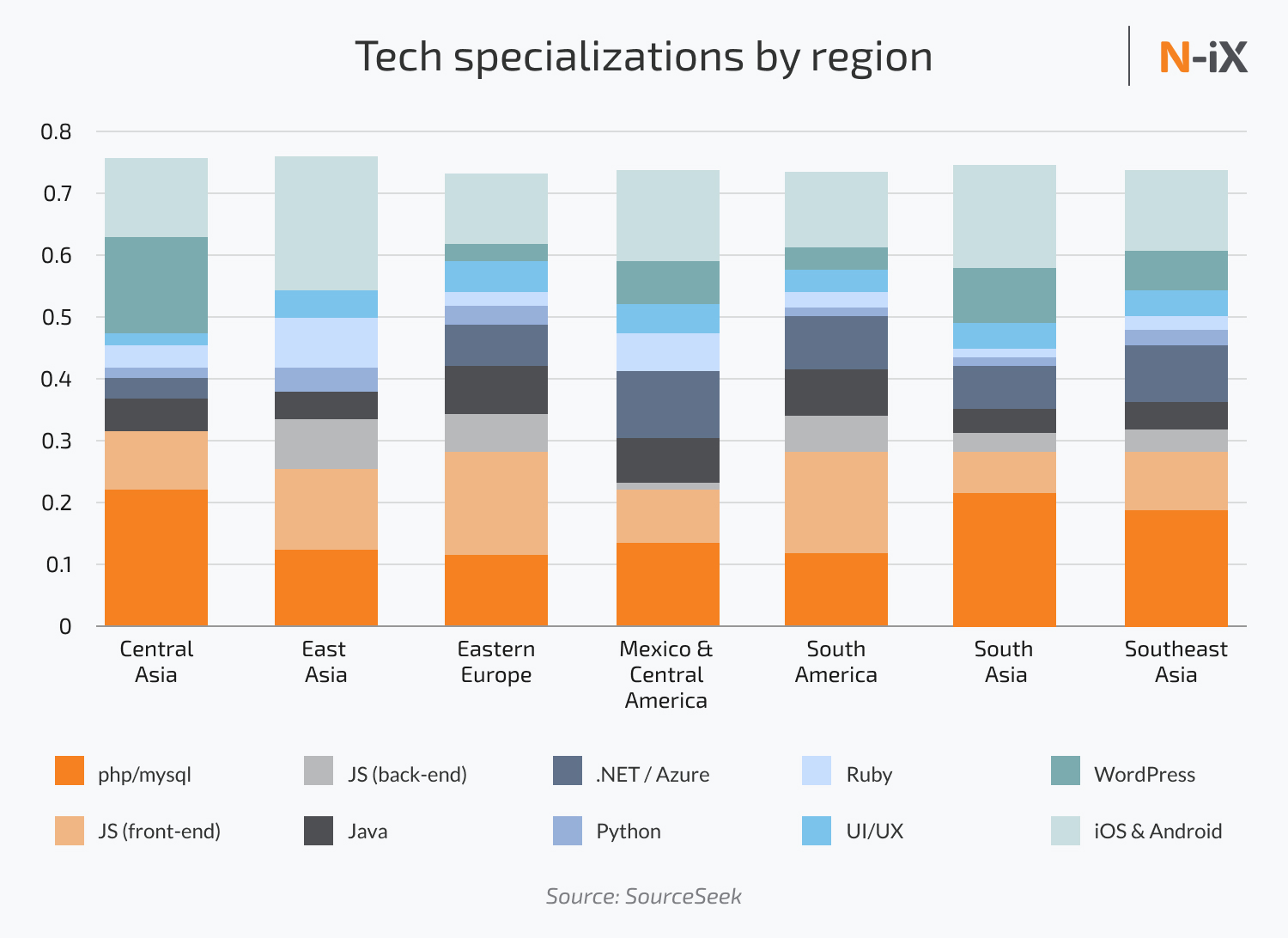 Eastern European countries work with companies in security, automotive, and travel & tourism industries, whereas Asia has great expertise in real estate and education.

Considering the competition for tech talent and its overall shortage across the US, Western Europe, and the UK, many companies face a similar problem: they don’t know where to outsource software development to get the job done for the money on hand.

Outsourcing is about finding a vendor that can deliver a tech solution for the price that fits your budget. 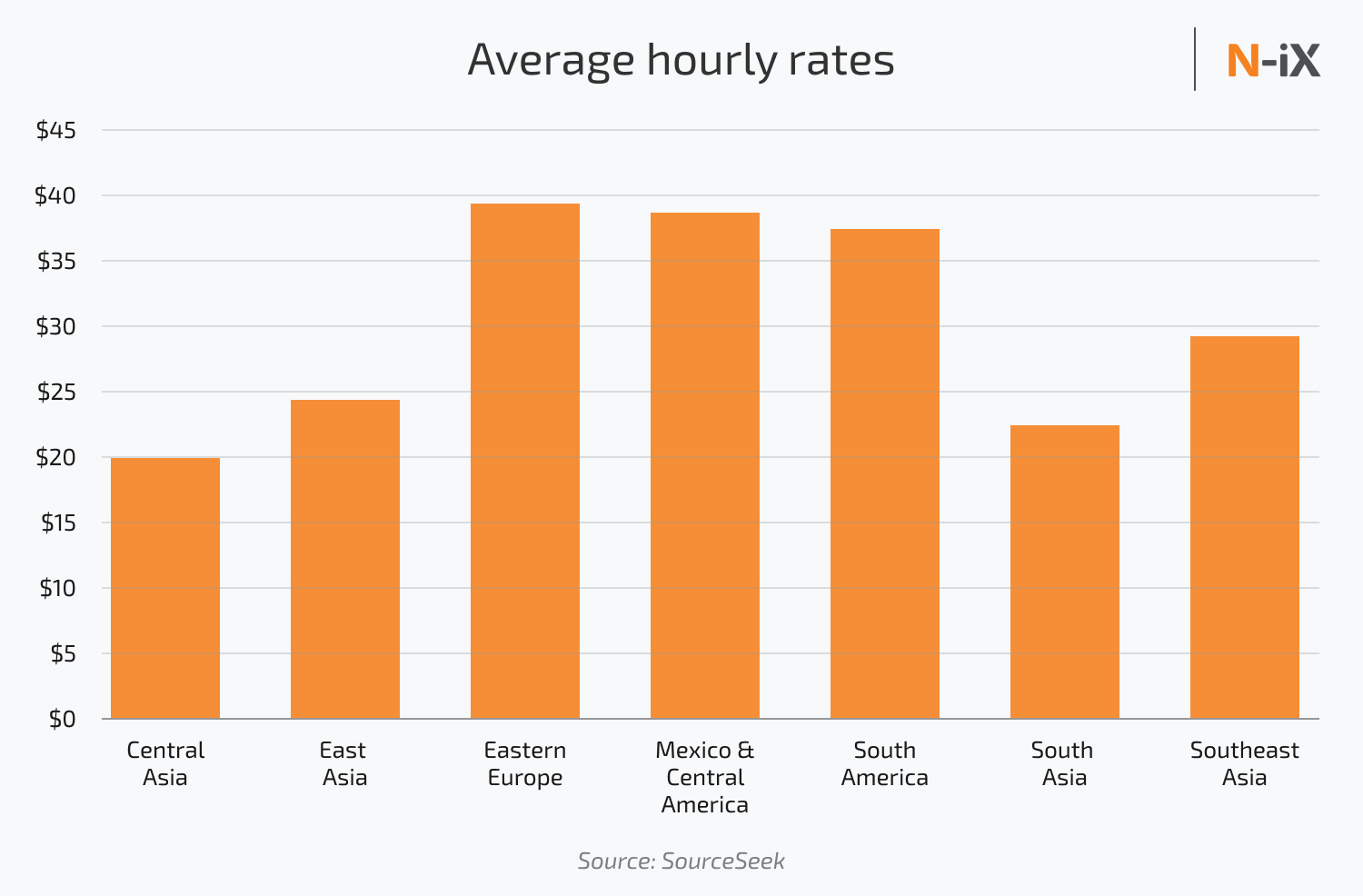 This chart presents the average hourly rates in some of the best IT outsourcing regions. The lowest rates can be found in Central Asia (particularly in India), where developer rates per hour reach $20. A bit higher raters are in East Asia (e.g. in China) with an average hourly rate around $25. Eastern Europe and Latin American developers get around $36-38 per hour. Let’s discuss it in more detail.

Let’s take a closer look at the breakdown of billing rates by country based on the experience of the expert. The chart below shows how the rates differ depending on the level of a developer, QA, and a software architect in Asia. 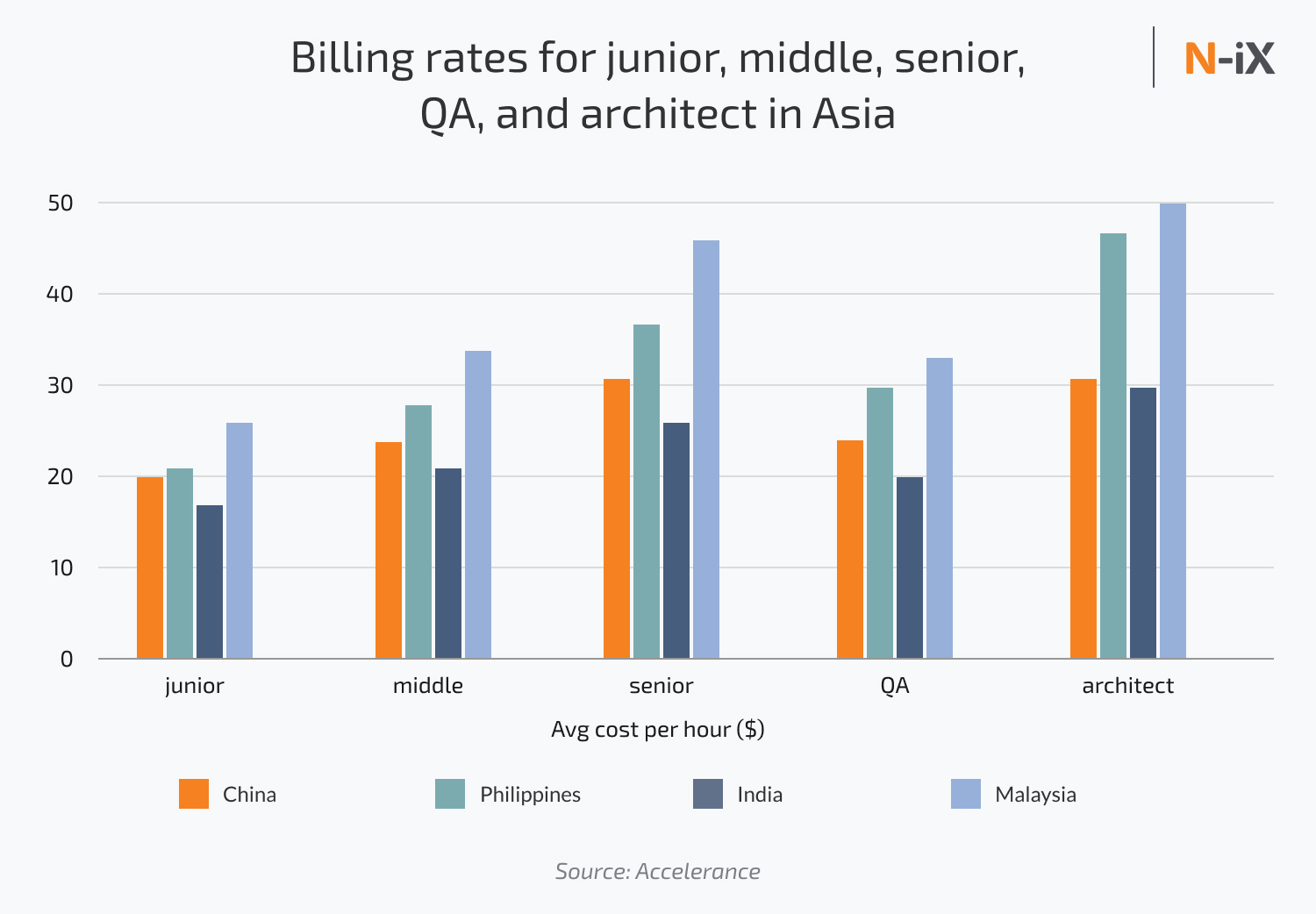 Eastern Europe has slightly higher billing rates, compared to Asia. However, it can be explained by a number of reasons like excellent tech education, enormous expertise in custom software development and outsourcing, along with a decent command of English. 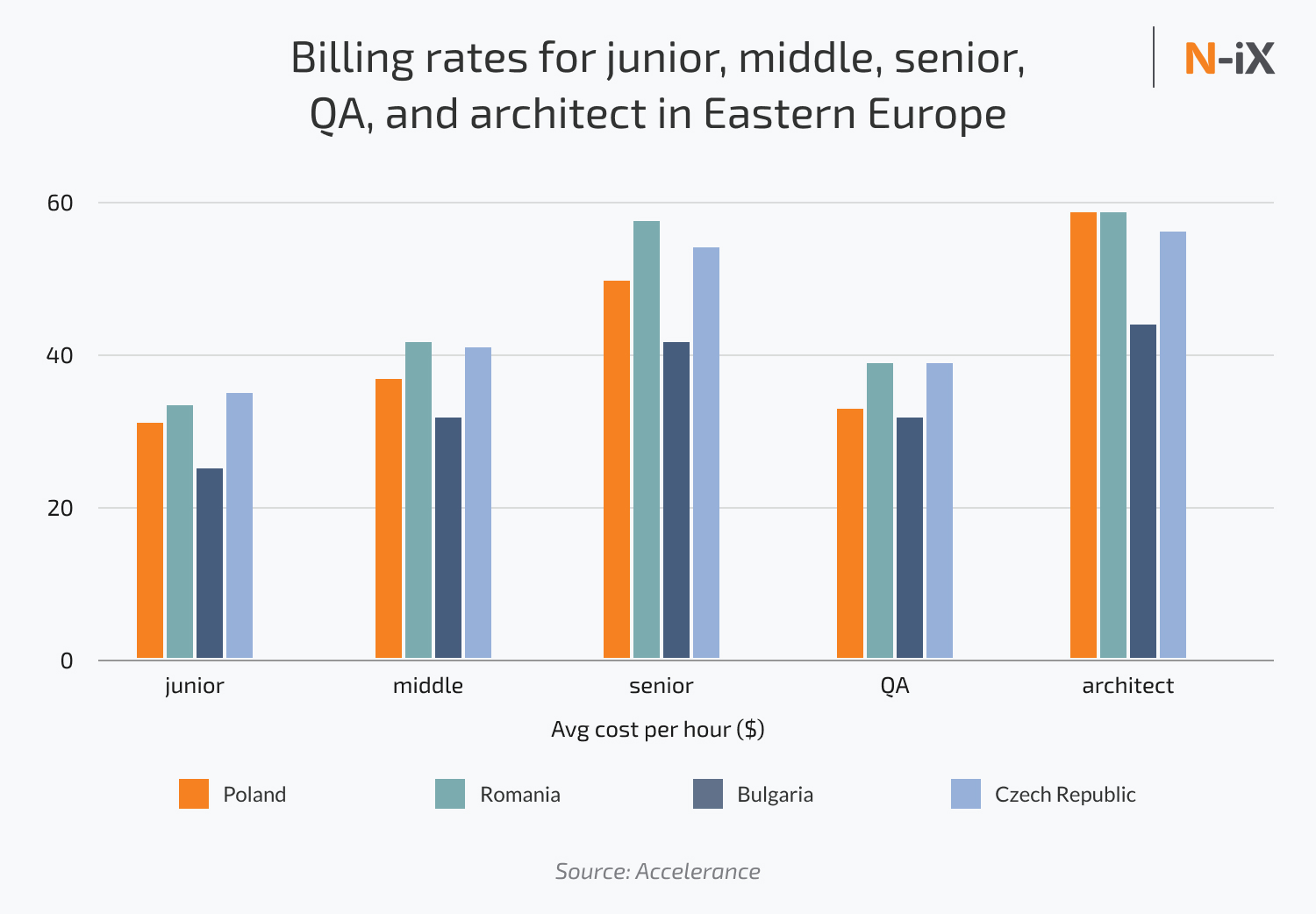 Central and South American countries like Mexico, Brazil, Argentina, and Colombia, which are mostly known for offering nearshore developers to companies from the USA, have even higher billing rates than in Eastern Europe. However, their average hourly salaries are lower, which can be a sign that developers there might be underpaid. 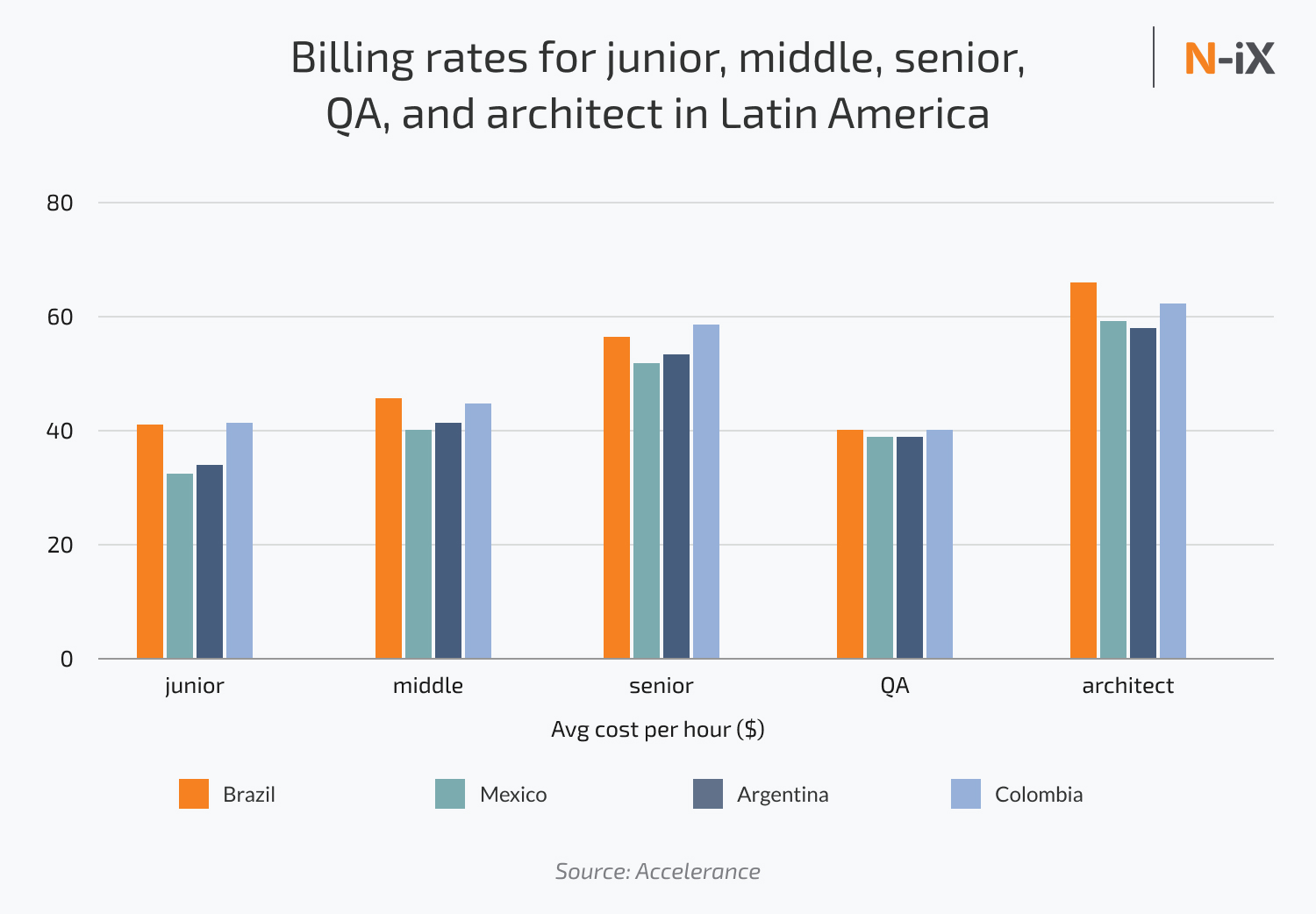 Cross-cultural communication is complicated. It is even more complicated in the work environment, especially in outsourcing, when the teams are divided by different cultures and diverse business approaches, as well as languages and uniques traditions. To ensure that everyone is on the same page, everyone needs to put in extra effort into it. There are two basic things you could do to minimize culture-related risks in outsourcing:

Typically, there are countries that are considered an excellent cultural fit for clients from the US and the UK. In the table below, you can find the results of Garter research about cultural compatibility as well as English proficiency score. 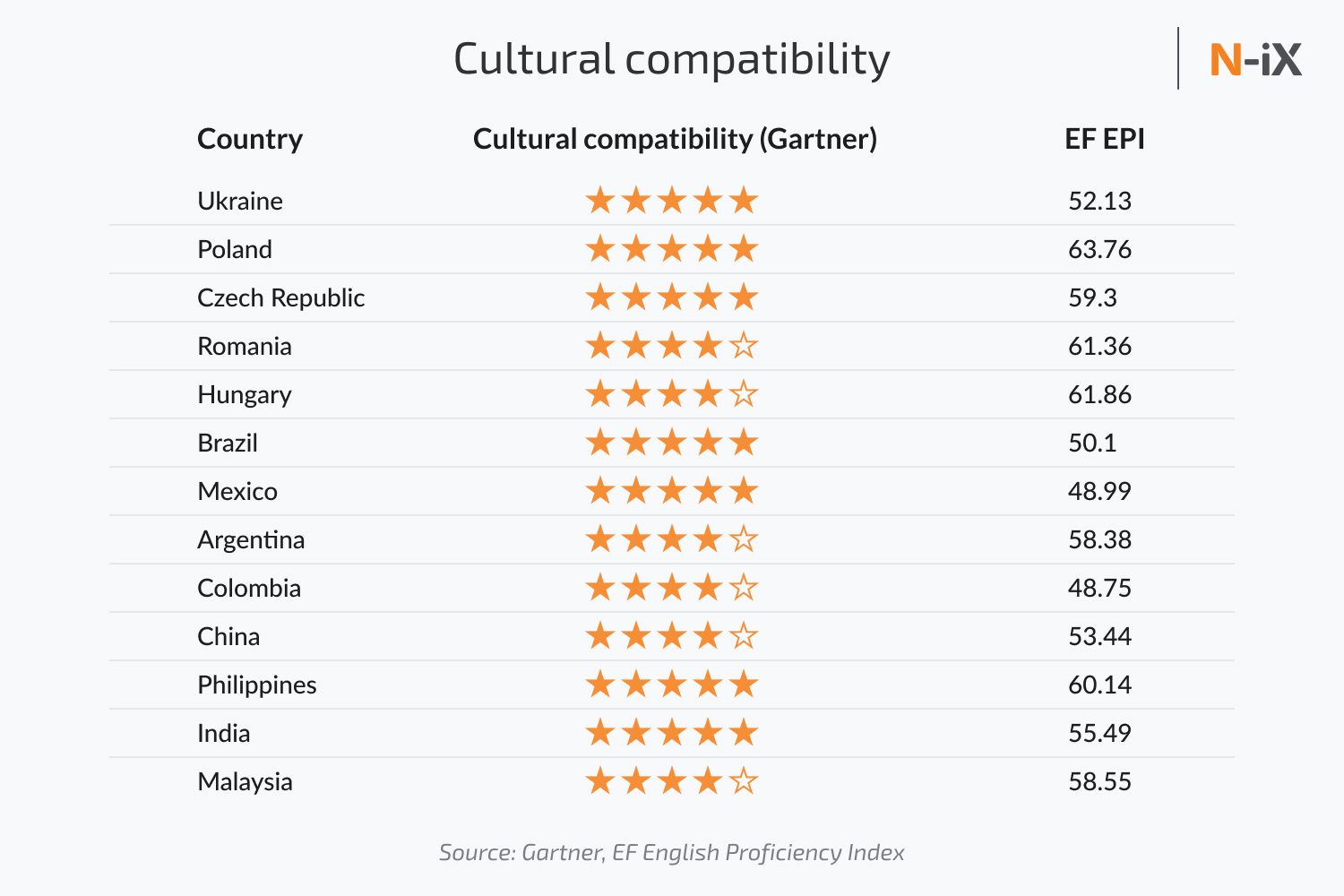 If we are answering the question of where to outsource from a cultural perspective, it is vital to find the culture and the software development partner that match your expectations. Should it be a lengthy project? Look for an IT outsourcing country with a high long-term orientation and uncertainty avoidance score. If you are looking for a single developer who will be flying solo, look for locations with high masculinity and individualism rates. Find out more in a PDF file below.

Where to outsource: cross-cultural perspective

You may also be interested in Ukrainian software developers in cross-cultural communication.

Working with a nearshore or an offshore vendor, some companies experience troubles aligning working schedules or setting up meetings. Understanding how many overlapping working hours your teams will have can help you choose the best IT outsourcing country. 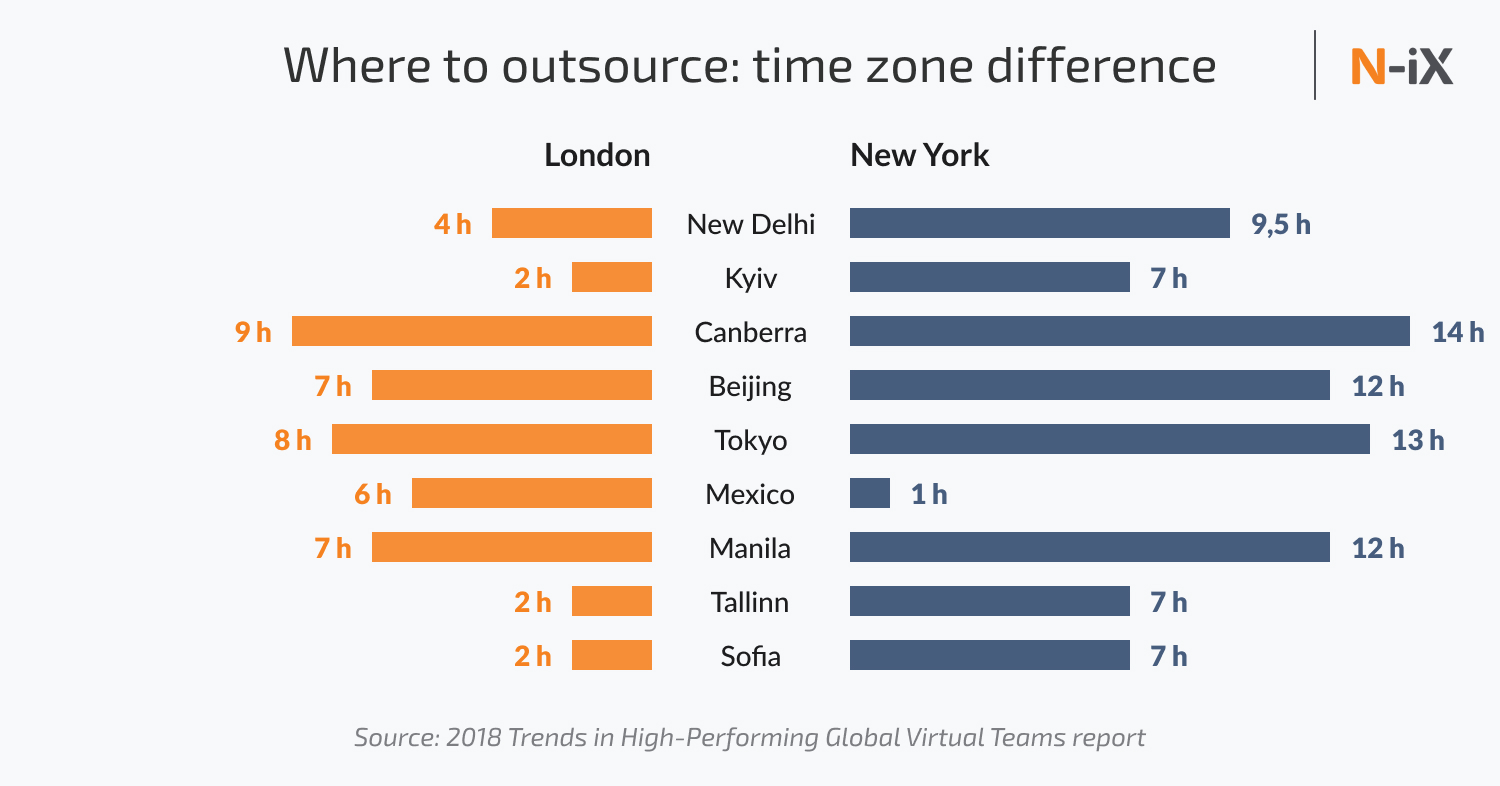 However, having a team that is a couple of hours ahead or behind, can actually be beneficial for maintenance and tech support. Below, you can find more detailed information about how the time zones overlap between EST/UTC and some of the best IT outsourcing countries. 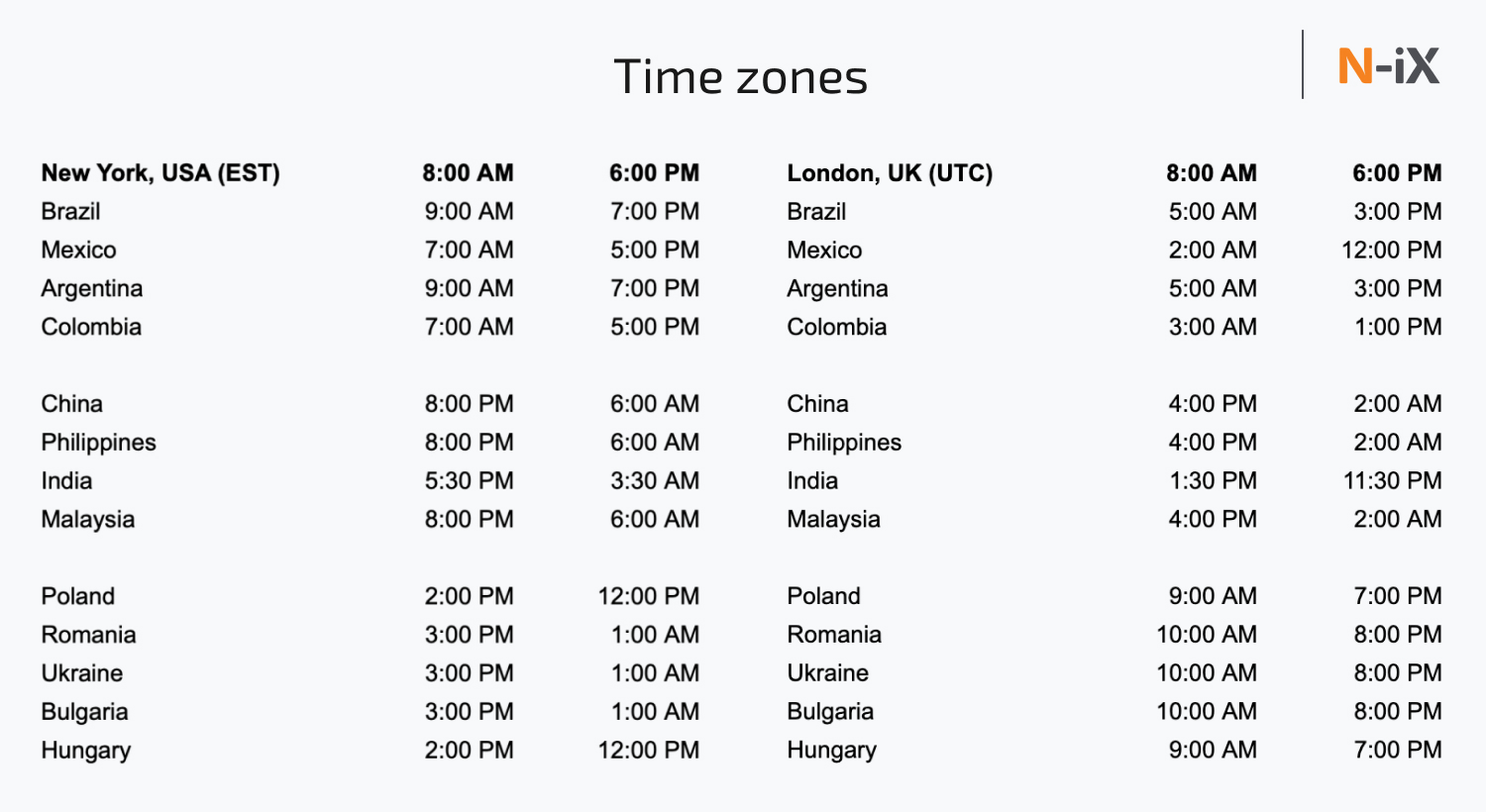 Where to outsource? Asia

Seven out of the top 10 best IT outsourcing countries in 2019 AT Kearney GSLI are from Asia. This region has strong expertise in developing products from scratch. It also has a decent technical education, solid expertise across many domains and a vast labour pool.

Find more about the benefits of outsourcing to Asia.

Best IT outsourcing countries in Asia

While talking about the best It outsourcing countries in Asia, the top contestants are:

Where to outsource? Latin America

The top 3 IT outsourcing destinations in the region are:

Due to the geographic proximity and convenient overlap of the working hours, LatAm countries can be a favourable location for companies looking to nearshore their software development.

You may also be interested in Top 50 IT outsourcing companies in the world.

Where to outsource? Eastern Europe: pros and cons

This region is well known for its tech expertise with enterprise technologies like .NET, Java, C/C++, as well as modern tech stacks that include Python and JavaScript.

Apart from the excellent tech expertise, EE is known for fostering start-up culture. Four cities made it into the European Digital City Index as start-ups friendly destinations: Tallinn (18 in the top 60), Budapest (33), Prague (37), Warsaw (38) and Bratislava (41).

Typically, when we talk about outsourcing to Eastern Europe, we think about countries with the largest number of professional developers: Poland, Ukraine, Romania, Czech Republic, Hungary, and Bulgaria.

These countries have hundreds of IT outsourcing companies that can work with small start-ups, mid-size businesses, enterprises, or even unicorns. Several of these countries received the title of best IT outsourcing destinations throughout the years. Many companies from Eastern Europe have development facilities in several Eastern European countries, as well as global offices and made it to the Global Outsourcing 100 list repeatedly. An example of such companies is N-iX, a Ukrainian software development company with development centers in Ukraine, Poland, and Bulgaria, as well as offices in Sweden, Malta, and the US.

Discover the top IT outsourcing countries of Eastern Europe in our market report.

27 July 2021
Top 50 IT outsourcing companies in the world
The global demand for qualified IT services is growing rapidly. Whether you need to expand your team, or deliver a custom solution, you will have to find a reliable IT outsourcing partner to help you ...