Education that makes developers in Ukraine the best in the world

Ukrainian software developers are well-known around the globe for both their skills and experience. TopCoder spotlights developers in Ukraine among the best experts in the world, while SkillValue featured them within the top 5 most skilled experts [1,2]. With an extensive tech talent pool of 184,700 professional developers, such results are more than impressive. So where does this success come from? The answer is simple: almost 100% literacy of the adult population, easy access to higher education, widely-spread STEM degrees and programs, as well as good English proficiency of developers in Ukraine.

Ukraine has a high literacy rate and easy access to education

Ukrainian constitution grants free access to education to all its citizens. As a part of Soviet Union legacy, emphasis on education continues to be the country-wide focus even now. Ukraine is one of the several countries with almost 100% literacy rates [3]. The adult population’s literacy rose from 99.4 % in 2001 to 99.8 % in 2015. [4,5]. Moreover, more than 70% of Ukrainians have a secondary or higher education.

The country invests heavily in education, giving Ukrainians access to state-funded schools. Unlike many European countries or the USA, the number of private schools and universities is much lower. Therefore, many technical experts received proper secondary education and have a degree.

Ukrainian higher education is recognized in the world

Ukraine ranks fourth in the World Bank Enrollment Index in terms of tertiary education [6]. Moreover, Universities 21, a global association of research universities, lists Ukraine as the 38 out of 50 countries in the National Higher Education Systems ranking [7].

Ukraine has over 450 state-funded universities [17] where students can obtain a degree and qualify, can earn their Bachelor’s, Master’s, or Ph.D. without incurring lifelong debts. Moreover, the country provides many scholarships every year. For example, in 2018, nearly 118,000 students who want to get a Bachelor’s degree and 62,400 students who aspired to do Master’s were able to receive scholarships from the state [8].

Every year, DOU publishes a survey of the Ukrainian IT specialists, featuring their career paths, education, and aspects of their social lives. The 2019 study shows that the prevailing majority of Ukrainian developers and tech experts possess a degree. Around 82% of men and 87% of women have an academic degree. Among these graduates, roughly 41% of women and 64% of men have STEM-related degrees. 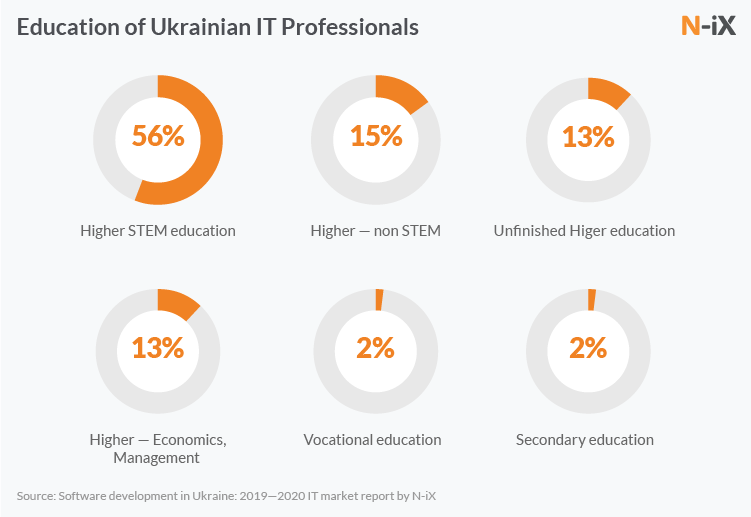 Every year, Ukraine has around 130,000 engineering graduates, which is more than in France, Germany, Poland, and many other European countries [9, 10]. Also, Ukraine has the largest share of IT graduates among CEE countries - over 16,000 IT graduates every year [9]. 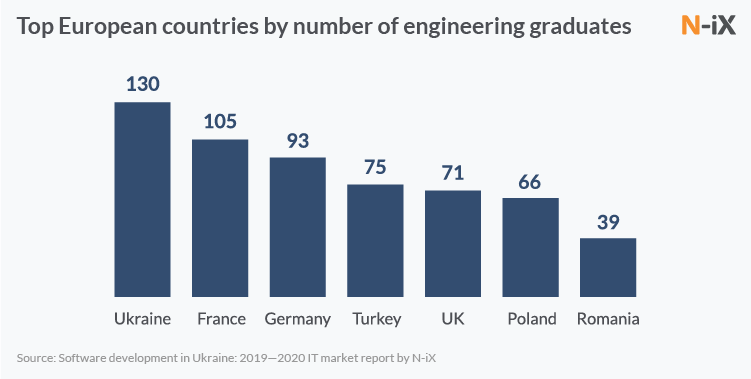 With the development of the IT sector, STEM education is becoming increasingly popular in Ukraine. Ukraine has one of the largest shares of STEM and computer science graduates in Europe, reaching 9.8% out of all grad students.

It means that more and more young specialists will join the tech talent pool of the Ukrainian IT world. So what universities offer the best technical education, when it comes to STEM and computer sciences?

Tech education and universities in Ukraine

Higher education in IT is not obligatory, but in many cases, it is vital. Not only does it provide students with systematic knowledge about the industry and technology, but also set the ground for further self-education.

Many recent surveys show that Ukrainian software developers are often critical about their higher education. Typically, most universities are graded between 4 and 7 out of 10 possible points. And while tech education might have been weaker 10 or 15 years ago, recent studies show that those who graduated more recently have better understanding and appreciation of how university affects their career. On top of that, with the late changes in education and focus on a self-learning, nearly 25% of students get their first job in the 1st-2nd year of studies [11].

Ukraine has several University rankings as well. For example, DOU lists these twelve educational establishments like the ones with robust technical programs. 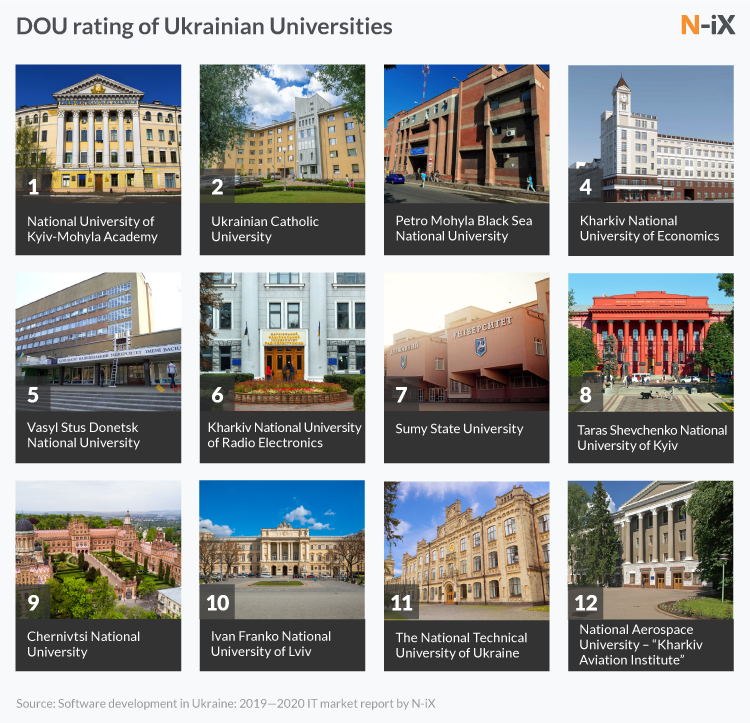 Despite the commonly outdated programs and the inability of higher education to adapt quickly to a changing world of IT, the integration of university education and practical experience is growing every year. Every year more and more IT companies inspect existing educational programs and partner with universities to improve them and prepare students for real-life challenges.

All in all, our educational system has a long way to go before we will be able to catch up with the highest standards of the world’s leaders. Nonetheless, experts agree that technical education in the country is much better than in most European countries. That is why many students choose Ukrainian universities over other European alternatives to get their tech degrees.

Extracurricular options for developers in Ukraine

88% of Ukrainian software developers report that they invest both time and money into their self-education. More and more developers in Ukraine use online platforms like Coursera and Udemy to take additional hard and soft skills training. 67% of all experts say that they regularly catch up on professional literature, and 34% often visit conferences, tech meet-ups, or other dedicated IT events [14].

Apart from traditional academic institutions, Ukraine has an impressive number of private IT schools where experienced professionals share their knowledge with the new generation of IT specialists. DOU surveyed 73 private educational centers and discovered that in 2016 they had over 35,000 students [15]. Just seven schools out of the list account for 46% of all graduate students. They are:

An overwhelming majority of developers in Ukraine are fluent in English 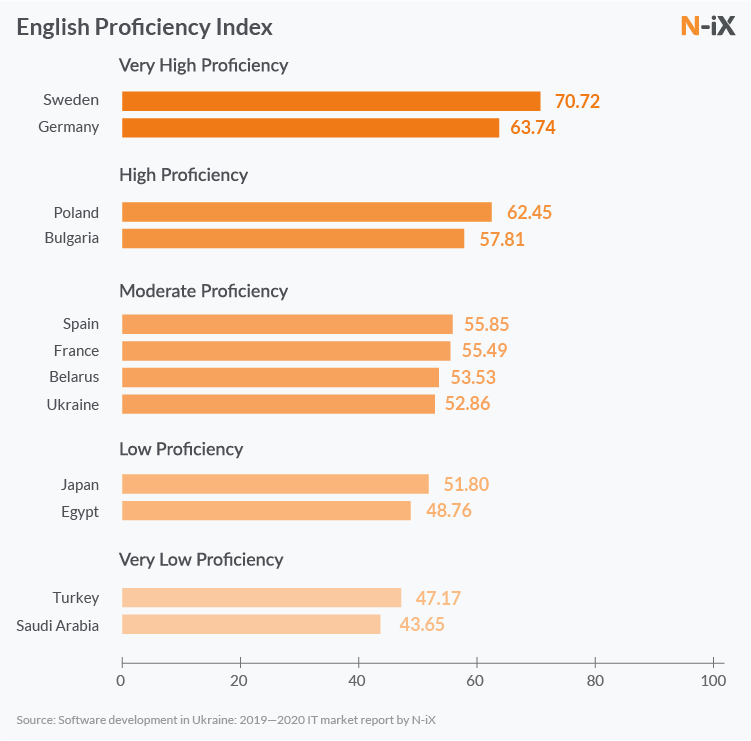 Global trends show that both state and private investments in English learning are increasing. Ukrainian IT companies have been a part of this trend for a while. Most Ukrainian software development companies either have internal language training or offer reimbursement for external courses. All these efforts pay off when we think of taking down the language barrier.

According to the DOU survey [14], 81% of the Ukrainian IT specialists have an intermediate and higher level of English (in 2018, these numbers reached only 79%, which shows the improvement). Moreover, a lot of vendors have rather high requirements to the job candidates in terms of their English, so developers in Ukraine dedicate much effort to mastering their English skills.

As established earlier, Ukraine has always had a strong system of STEM education. Acknowledging the fact that many programs got outdated or do not match the IT market needs, local IT companies partnered with IT clusters to change the situation. For the last couple of years, the joined efforts helped to transform and update many courses, as well as open modern research labs for engineering students - their potential employees.

In 2017, Lviv Polytechnic National University started a new program in Artificial Intelligence. They also have a modern IoT Lab, launched by Lviv IT Cluster in cooperation with local IT companies in 2016.

With the support of Lviv IT Cluster, a series of programs under the name “Data Science & Intelligent Systems” started at Ivan Franko National University of Lviv. It includes Machine Learning & Artificial Intelligence, Data Analysis, Internet of Things, and Smart Solutions & Intelligent Systems. 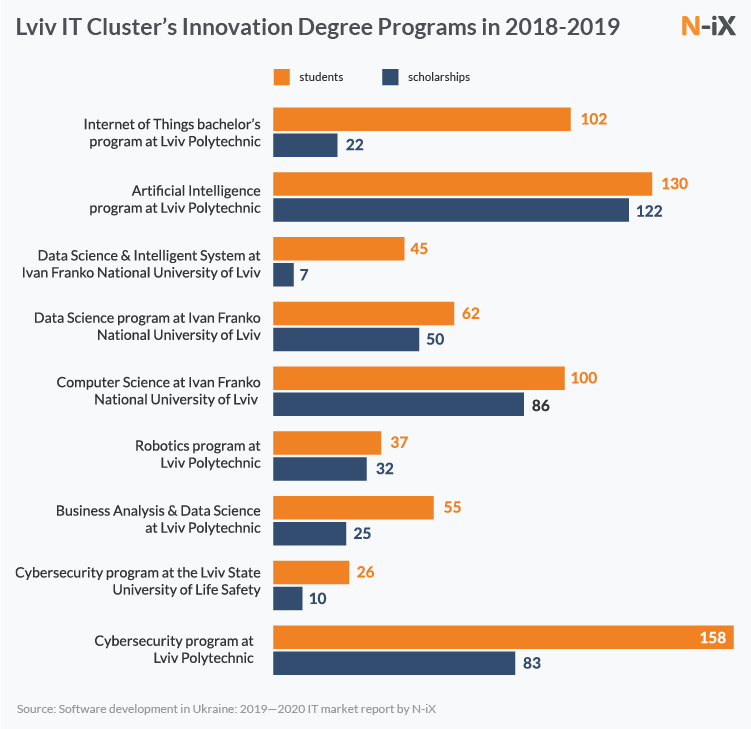 With a large number of universities in Ukraine, a vast amount of extracurricular education opportunities, as well as the popularity of STEM education - there is no wonder that Ukrainian tech talent pool is growing extensively. Add excellent English proficiency, the interest of IT companies in tech education, and the state efforts to develop IT sector to get the recipe for some of the great Ukrainian software developers.

22 March 2019
An honest look at Ukrainian software developers: cross-cultural communication in outsourcing
When it comes to IT outsourcing, the fear of miscommunication is one of the most common ones. Business owners have their doubts about building offshore dedicated development teams, as they know very l...