The software development market of Slovakia has grown significantly since the country joined the EU in 2004. Skilled talent, strong STEM education, and a stable economy make this location attractive for businesses worldwide.

At the same time, Ukraine boasts the second-largest tech talent pool in Eastern Europe, as well as the cost-efficiency of IT outsourcing.

What are the reasons to outsource software development to Slovakia and Ukraine? How to choose a trusted outsourcing provider? Let’s find out.

Here are the key factors that make Slovakia an alluring outsourcing destination:

Here are the key reasons why businesses choose Ukraine as an outsourcing destination:

Key insights: Ukraine boasts almost five times a bigger tech talent pool than Slovakia and 1,5 times bigger IT export. Slovakia, at the same time, has a more stable economy due to its EU-membership. Nevertheless, Ukraine is recognized by A.T. Kearney as a more attractive outsourcing destination than Slovakia.

The expertise of developers in Slovakia and Ukraine

Slovakia houses over 39,000 tech specialists. According to the ABSL report, around 46% of specialists are working for Shared Services Center (SSC)/Global Business Services (GBS) companies, software development providers employ 32%, and additional 22% work for BPO outsourcing firms. As a result, most developers in Slovakia are not available for outsourcing.

What concerns the tech expertise, according to the SkillValue report, Python developers from Slovakia are more skilled and knowledgeable than experts in other technologies.

Developers from Slovakia typically work with businesses in fintech, leisure, government, and others.

Ukraine is home to 192,000 software engineers, which is one of the most significant numbers in Eastern Europe. What’s more, the vast majority (around 60%) of Ukrainian developers work for outsourcing and outstaffing companies.

According to the DOU survey, the most widespread programming language in Ukraine is JavaScript, used by 24% of experts as a primary language and 41% as an additional one. Other popular languages are C#, .NET, Java, PHP, and Python.

Key insights: Ukrainian developers are skilled in a wider variety of programming languages and technologies, whereas the primary specialty of developers from Slovakia is Python.

Tech education of developers in Slovakia and Ukraine

For instance, N-iX supports professional training among youth. The vendor grants scholarships to the top students at the Computer Science Program in the Ukrainian Catholic University.

English proficiency of developers in Slovakia and Ukraine

OutsourcingReview states that 92% of developers in Slovakia are fluent English speakers, 46% - German (due to proximity to Austria), 13% - Russian, and 5% - French. That is one of the reasons why software development in Slovakia is flourishing. What’s more, as far as English is concerned, the country is recognized by the EF English proficiency index as a country with high English proficiency.

According to DOU, 81% of the Ukrainian IT experts have an intermediate and higher English level. However, top management, project managers, as well as business analysts are more fluent than other specialists engaged in the industry.

Key insights: An overall English level in Slovakia is higher than in Ukraine. However, the majority of Ukrainian IT experts have intermediate and higher levels.

Tech conferences in Slovakia and Ukraine

Many experts state that conferences are an essential source of new information. Although in 2020, the vast majority of such events take place online, Slovakia still organizes around 50 versatile conferences annually. Bratislava, as a capital, houses the lion’s share of them. Such events as International Conference on Computer Science, Machine Learning and Big Data, International ITAPA Congress (the most prominent IT conference in Slovakia), and many others take place in Bratislava.

Ukraine hosts a vast number of tech conferences. The majority of such events take place in Kyiv, the capital of the country. However, the biggest one (IT Arena) used to take place in Lviv. In 2020, however, this conference was held online due to COVID-19 restrictions.

Among other big tech conferences, there are iForum, Saas Nation, Games Gathering, Analyze!, AI&Big Data Day, and many others.

According to StartupBlink, Slovakia ranks 51st among 202 countries, based on the strength of its startup and software development ecosystem. The cities with the most vibrant startup and IT outsourcing ecosystems are Bratislava and Kosice. Now, we will view these cities in more detail.

Hubs of software development in Slovakia

Slovakia is home to 39,000 software developers, the vast majority of whom live in Bratislava, Kosice, and Zilina. However, the majority of developers in Slovakia live in the first two cities, so we will focus on them.

Bratislava ranks first in Slovakia and 148th globally, due to the strength of its startup ecosystem, according to StartupBlink. Industries that opt for outsourcing software development to Bratislava most frequently are leisure and health.

As a capital, Bratislava attracts the best talent from the whole of Slovakia, so the salaries in the city are 3-5% higher than in other hubs. The Cost of Living Index by Numbeo ranks Bratislava as the most expensive city in the country.

Many global companies have established their presence in Bratislava. According to PayScale, the most popular employers in the capital are Amazon.com Inc., AT&T Inc., and Johnson Controls Inc. Their presence in the employment market, however, creates fierce competition for skilled talent.

According to StartupBlink, Kosice ranks second in Slovakia and 521st globally, based on the strength of its startup and outsourcing ecosystem. The most vibrant industries in the city are IT, leisure, and fintech.

Kosice boasts an IT cluster: Kosice IT Valley unites 30 companies and legal entities that created around 6K jobs since their inception.

Hubs of software development in Ukraine

There are five IT hubs in Ukraine: Kyiv, Lviv, Kharkiv, Dnipro, and Odesa. However, we will focus on the first two, as they house over 50% of Ukrainian talent.

Kyiv is home to the lion’s share of tech professionals (40%) in Ukraine. Global enterprises, including Samsung, Huawei, Ericsson, NetCracker, etc., have R&D centres in Kyiv. Many enterprises choose this city for outsourcing software development. As a result, the biggest Ukrainian IT vendors, such as N-iX, have development centers in the capital.

Lviv takes third place in Ukraine by the number of tech professionals - over 20,000 programmers work in the IT industry. According to the State of European Tech report, most Lviv tech experts work for either outsourcing (46%) or outstaffing (11%) IT service providers. Also, the city is home to 317 IT companies, 90% of which provide outsourcing services.

Cost of software development in Slovakia and Ukraine

Rates of developers in Slovakia

The cost of living in Slovakia is relatively high compared to other Eastern European countries. According to the Cost of Living Index by Numbeo, the country’s capital has a 53.42 overall living index, which is the biggest in Eastern Europe. By contrast, Warsaw, Poland, has 46.70. 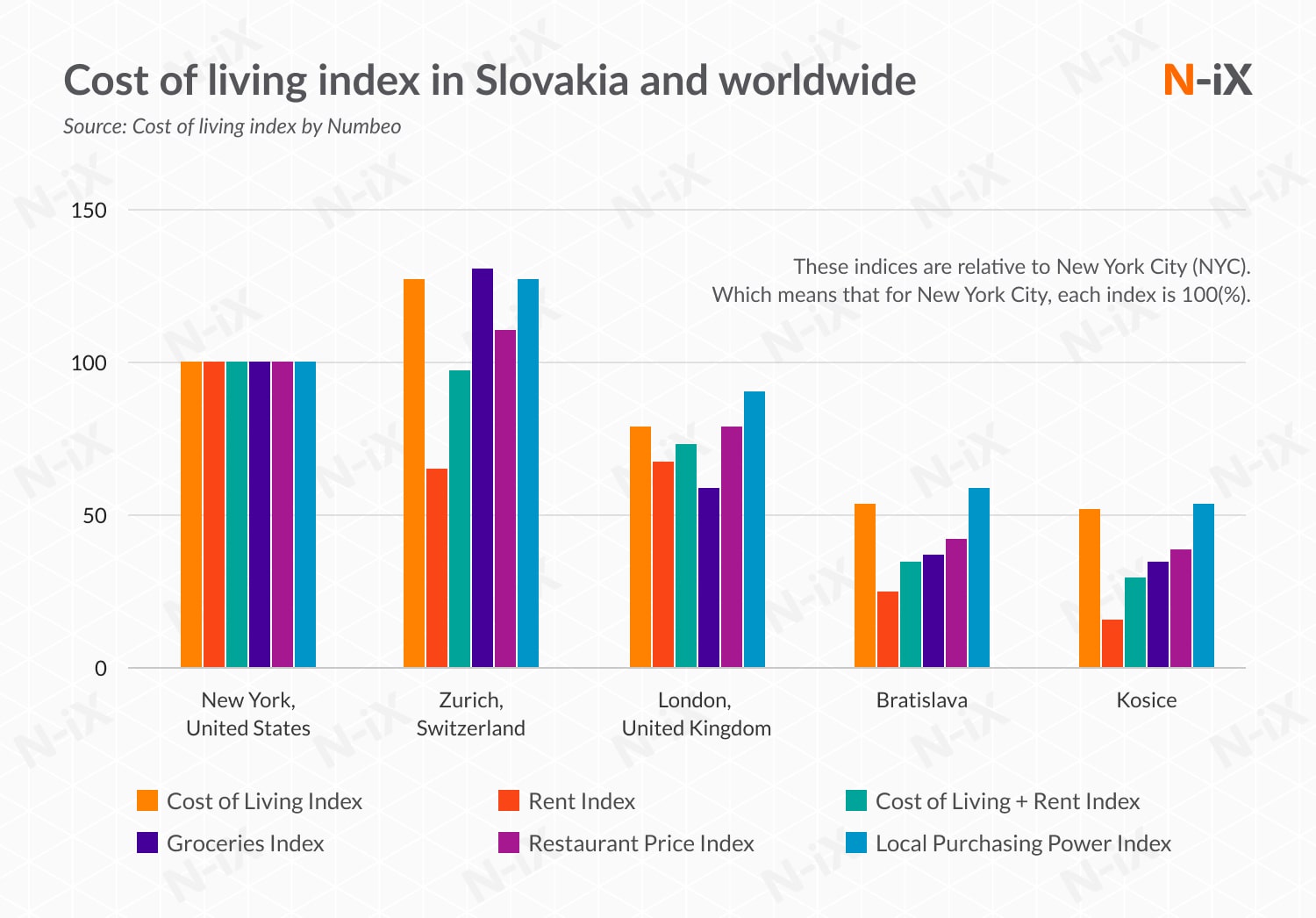 Developers in Slovakia make from $1.125 per month to $3.900, depending on the city, years of experience, and education. Speaking of education, engineers that have master’s degrees earn 29% more than professionals with bachelor’s degrees. 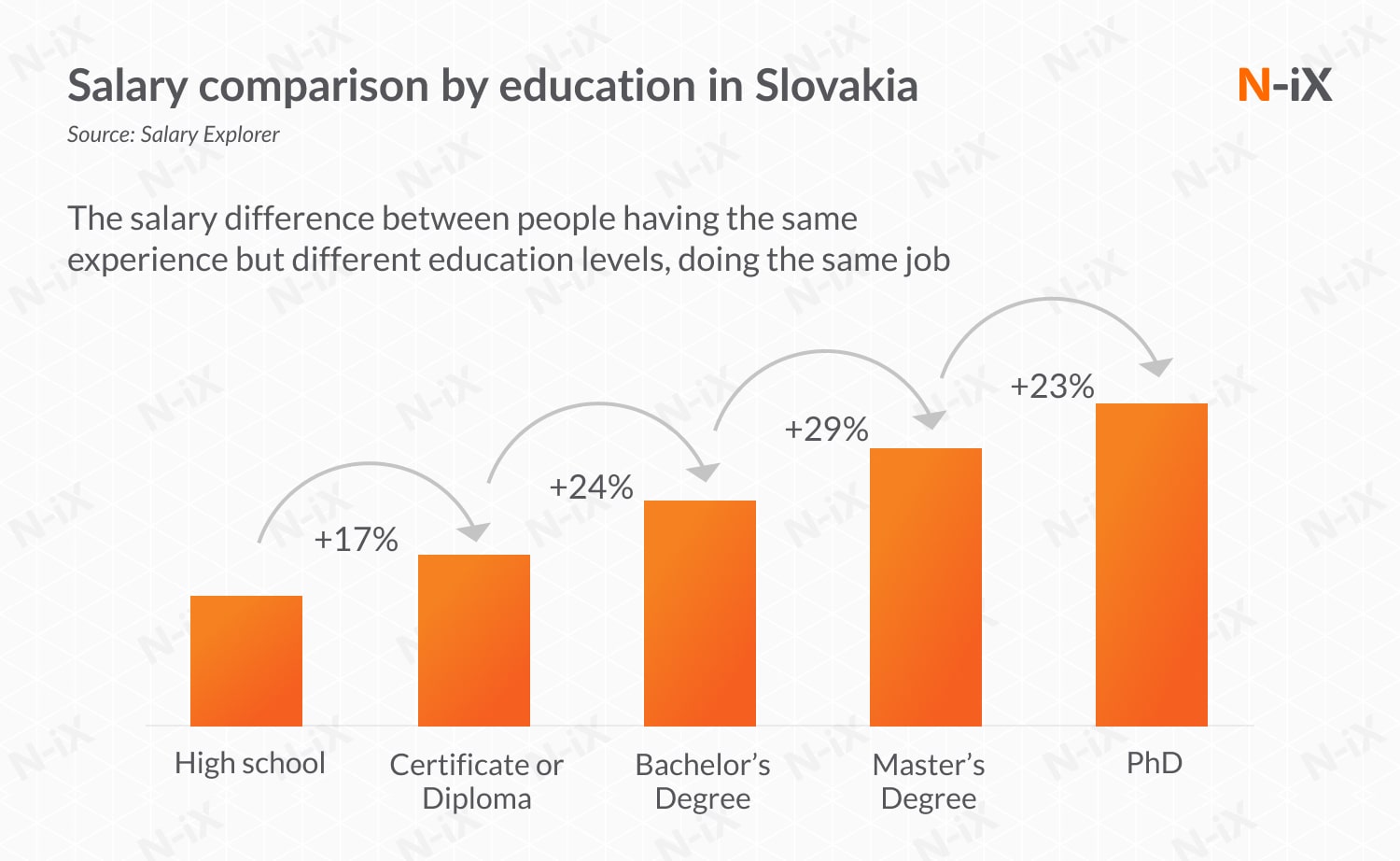 The median salary of a developer in Slovakia is $2.600 per month.

Rates of developers in Ukraine

The cost of living in Ukraine is much lower than in Slovakia. According to the Cost of Living Index by Numbeo, Kyiv has 31.59, and Lviv, Ukraine, has a 29.11 overall living index. Numbeo compares the cost of living to New York, the USA, where the index amounts to 100. 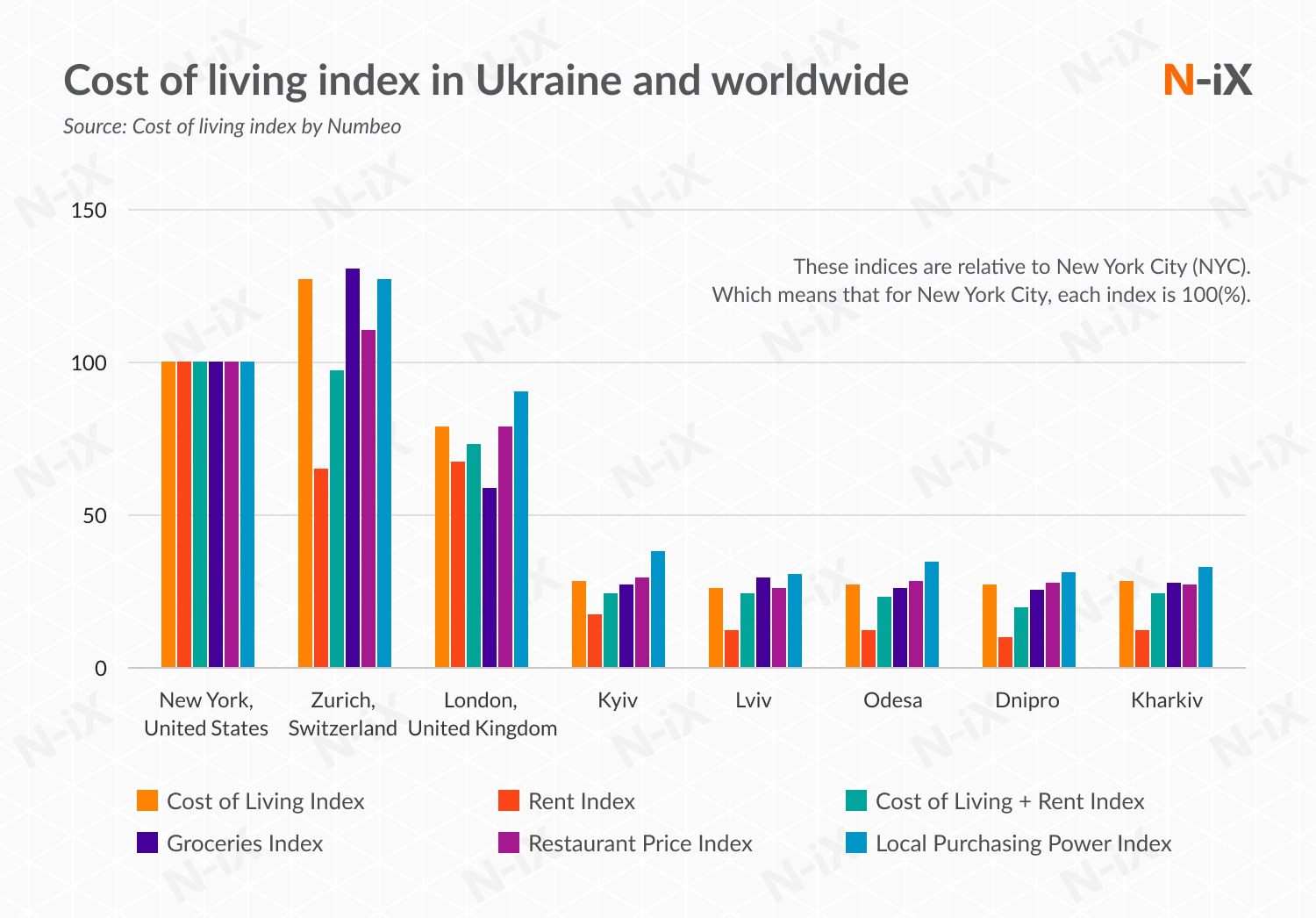 When it comes to rates of Ukrainian developers, their rates differ depending on the city they live in, years of experience, and position. Salaries may vary from $700 (junior software engineer) to $5K (system architect).

Key insights: Rates of developers from Slovakia are 20% higher than the rates of Ukrainian professionals. What’s more, Ukrainian developers have more versatile expertise. 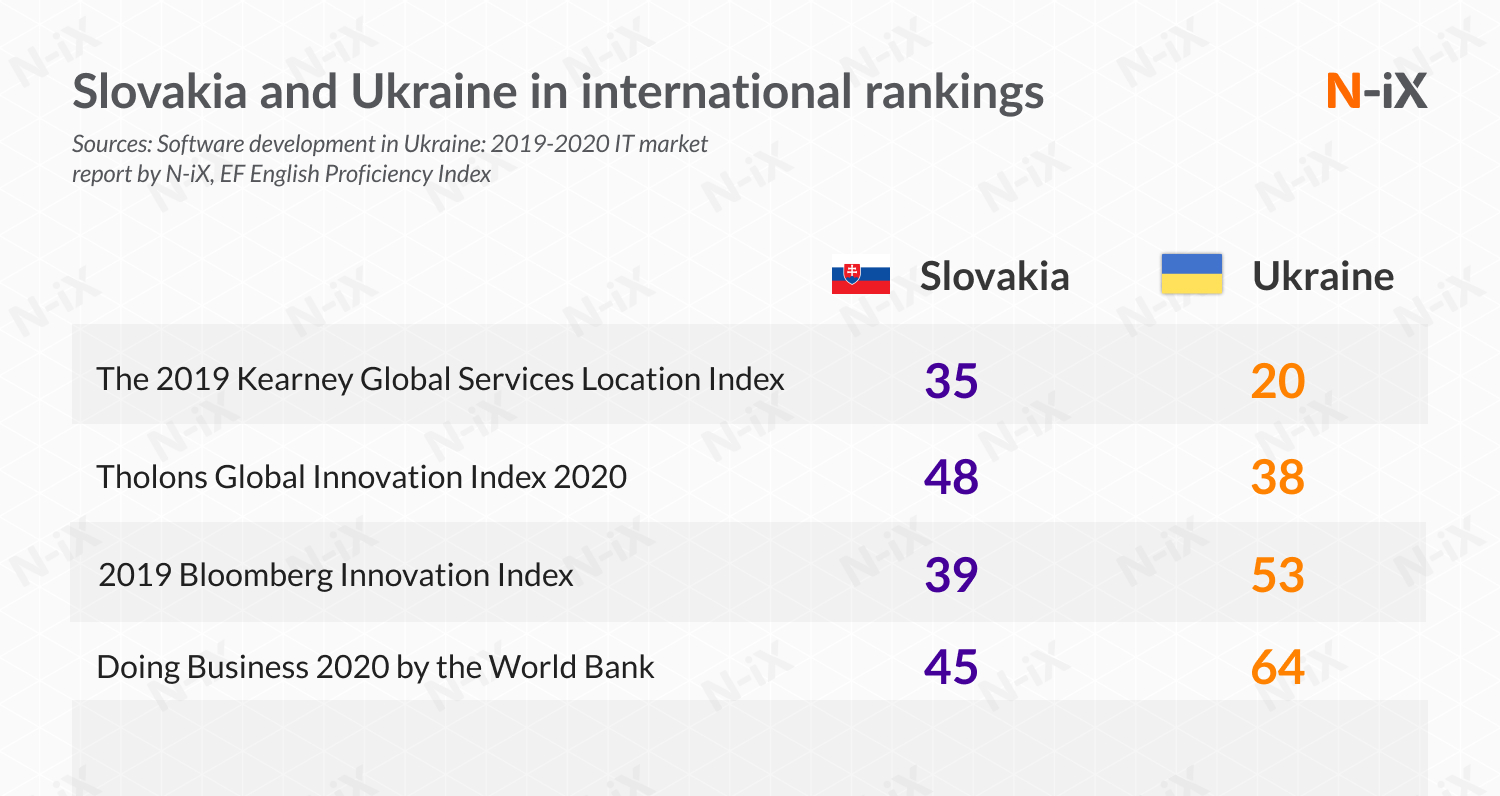 Now let’s recap the key insights about software development in Slovakia and Ukraine: 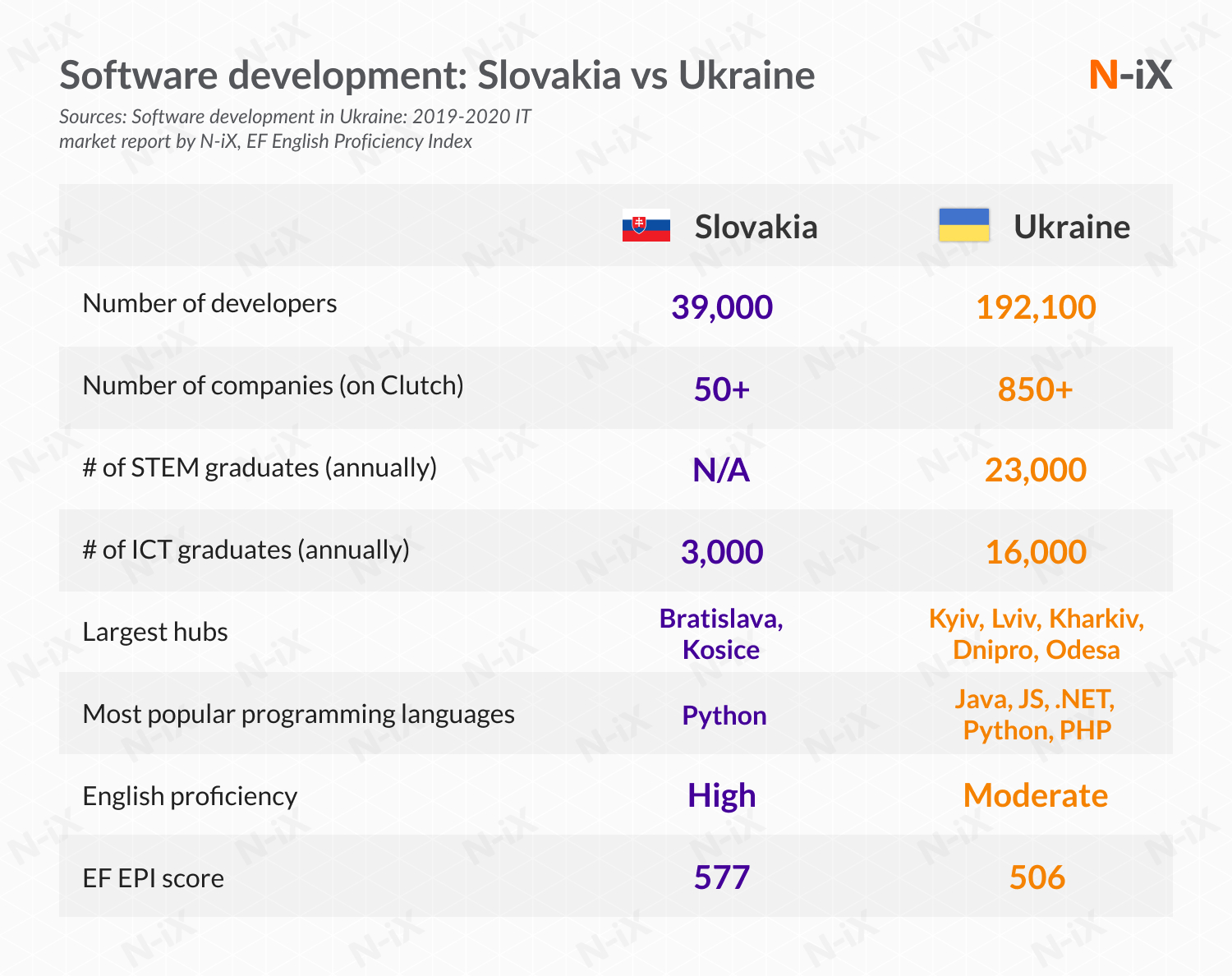 How to choose a trusted partner for software development in Slovakia and Ukraine?

Why choose N-iX as your software development partner?

Lebara is one of Europe's fastest growing mobile companies with five [...]

07 February 2020
How to make the most of staff augmentation in Eastern Europe
Working with in-house and onshore teams may be one of the most productive ways and give you the most sense of control. But, as Forbes puts it:'' If you can’t hir...

27 September 2017
Software development outsourcing to Eastern Europe: a complete guide
About the Guide In today’s era of digitization and rapidly changing business climate, few decisions are as critical to the success of an organization as selecting a trustworthy IT vendor. In ...