Ruby outsourcing: how to find the best developers in Ukraine

This year, Ruby turns 28, yet the interest in this technology is still on the rise. The battle for a professional Ruby and Ruby on Rails developer is fierce as there is a major talent shortage in the Ruby world. It’s not that there are no professionals out there - you just have to know where to find them. The lack of in-house Ruby developers drives companies to consider Ruby outsourcing as the best solution. To find in-demand Ruby expertise and set up a dedicated Ruby/Ruby on Rails development team, many businesses from the USA and the UK venture into Eastern European countries. Ruby outsourcing to Eastern Europe has become the most attractive option since it enables cost-saving without neglecting the quality of services. One of the best Eastern European options in terms of price, availability of expertise, and IT talent is Ukraine. Let’s discover the potential for Ruby outsourcing Ukraine holds.

The popularity of Ruby among software developers

According to the latest TIOBE Index trend, Ruby is the eleventh most popular programming language in the world (four positions higher than in 2020). Now it accounts for 1.5% of all job postings in the world. Despite many rumors, it’s definitely not dying but evolving. 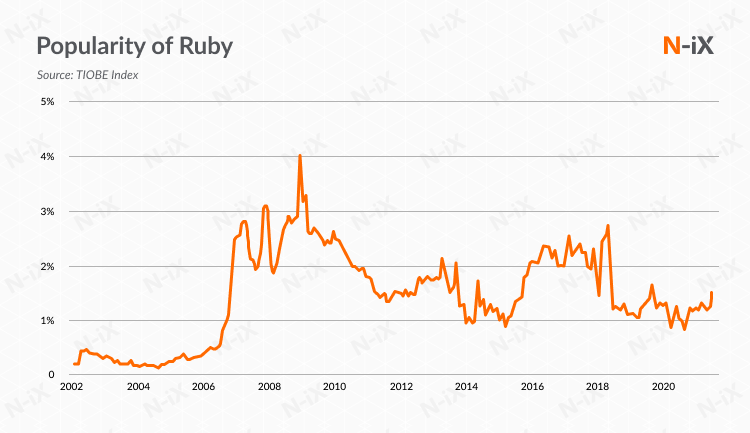 Within the last couple of years, Ruby has seen a lot of significant changes: implementation of a new JIT compiler, a number of performance improvements, new features, and a release of Ruby on Rails 6. It has reached its maturity and is set to become even more stable in the years to come with more and more companies offering professional Ruby app development services.

We can see the undeniable interest in Ruby and Ruby on Rails in Ukraine as well. It is among the top ten most popular languages among developers according to the DOU survey. Many software development companies in Ukraine provide Ruby outsourcing services. 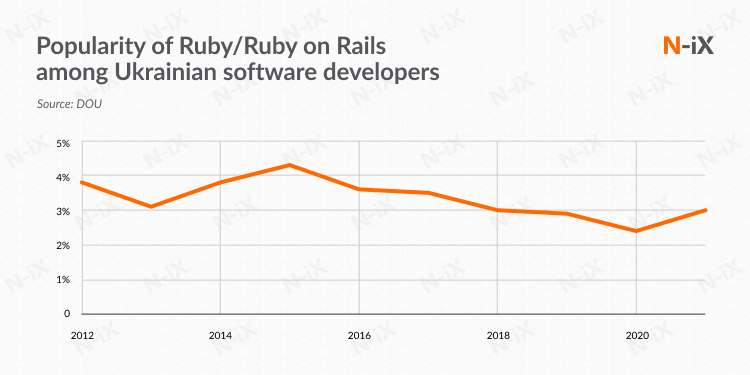 Here at N-iX, we have experience in Ruby web development using Ruby on Rails and other Ruby frameworks such as Sinatra as well as in DevOps using Chef and Puppet also written in Ruby. We have been working on the development of the payments platform for Currencycloud, a renowned UK-based fintech company. We have helped them to develop a responsive Ruby on Rails web application that allows the platform users to access the Payment Engine without requiring any integration.

A large pool of Ruby developers in Ukraine

Eastern Europe has al little over 25,000 experts and Ukraine accounts for almost a third of that number. Plenty of software developers in Ukraine have already explored the opportunity of working with Ruby and many of them have chosen it as their key technology. According to Linkedin, more than 7,100 Ruby developers work in the IT sector in Ukraine and nearly a half of them are senior developers. 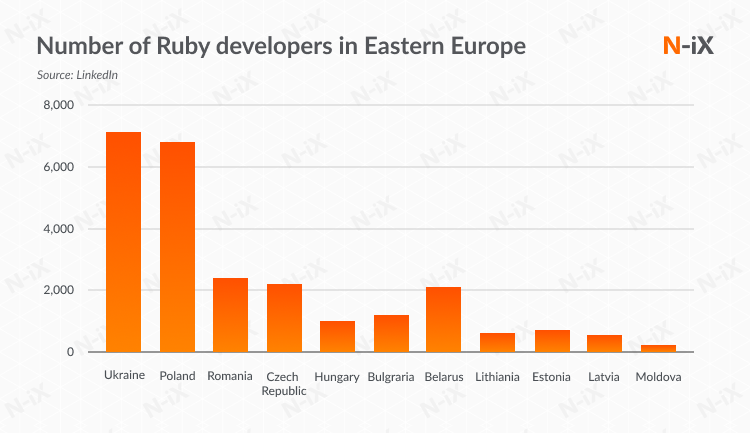 The largest number of experts who work with Ruby on Rails in Ukraine live and work in such cities as Kyiv, Lviv, Kharkiv, and Dnipro. Ukraine boasts a very big and active Ruby community with a lot of networking events and meetups, such as The Kyiv Ruby Meetup. This is a great opportunity to share the experience, knowledge, and news about the latest trends in the industry. What’s more, it enables junior developers to improve their skills and helps programmers switch to Ruby from other technologies. Among other popular conferences that take place in Ukraine are RubyC, RubyShift, and Ruby Conference Kyiv. Ukrainian Ruby outsourcing companies are eager to organize such events in order to retain the best talent and attract new specialists. Moreover, they encourage each and every Ruby on Rails developer to attend international conferences such as RailsConf, RubyConf, Euruko, and others where they can enrich their knowledge and network with industry leaders.

Software developers in Ukraine have vast experience working with Ruby frameworks, libraries, extensions, and APIs. They are skilled in such popular frameworks as Ruby on Rails, Grape, JRuby, RuboCop, and Roar. As for mobile development, they are proficient in Titanium Studio, Ruboro, Rhodes, and Ryby motion frameworks. Ukrainian Ruby programmers are highly productive as they use effective tools such as SaaS, PostCSS, and other preprocessors that allow adding new functionality to CSS files and make the code reusable and maintainable. Ukrainian specialists have solid experience working with version control systems such as Git, Svn, and possess practical knowledge of database management systems such as MySQL, NoSQL, etc. They are also competent in resource-Oriented Architectures in Ruby (ROAR), which makes it easy to parse and render REST documents. All the skills above are mandatory for a professional Ruby developer.

It's easier to build a Ruby development team in Ukraine

In Ukraine, Ruby is among the top 10 programming languages software developers would like to choose for their future project. The average age for Ruby in Rails expert in Ukraine is 29 years old, with 5 years of experience.

Ukraine also has the largest number of companies that offer Ruby outosurcing service. Out of 340+ Eastern European vendors that offer Ruby services on Clutch, 140 are based in Ukraine and have a proven track record delivering Ruby on Rails application development projects.

On average, it takes 3 months to recruit a Ruby on Rails development team consisting of 5 developers. Depending on the requirements this time may increase to 4-6 months. In order to attract Ruby developers, any experienced recruiter should know their incentives. A good salary is no longer the major thing that can attract experienced Ruby on Rails expert in Ukraine. One of the primary benefits that can attract a qualified Ruby on Rails developer is the availability of challenging frameworks and cool technologies to master within the Ruby project. Also, they often prefer the possibility of having a flexible schedule. In addition, many experienced Ruby developers are eager to participate in open source projects as well as having the possibility to attend conferences and training sessions all over the world. They always strive to extend their tech stack and are open for cooperation with international businesses.

When businesses choose a vendor for Ruby or Ruby on Rails in Ukraine, they expect to find candidates for all positions on the project. Besides, timing is always really important. Therefore, they have to ensure that the company is capable of building a Ruby development team and be confident that software developers are qualified for their positions. In order to do this, businesses need to consider if the Ruby outsourcing company has enough resources to find Ruby engineers in a reasonably short time frame. Despite a big pool of experts who specialize in Ruby on Rails in Ukraine, not all Ukrainian companies have enough resources to staff a strong Ruby on Rails development team. HR and recruitment departments in the established IT outsourcing companies are ready to hunt candidates and even attract them from other cities. They have the capacity to offer great benefits and perks including extensive social packages, flexible working hours and the best working facilities. What’s more, medium and large Ukrainian Ruby outsourcing companies offer various cooperation models such as team augmentation, project outsourcing, and others to meet the business needs of the client. That is why, the companies need to pay special attention to the outsourcing providers in Ukraine who have a good employer image.

The appetite for a skilled Ruby on Rails developer is higher than the supply. On the whole, Ruby outsourcing to Ukraine is a great option and it can bring lots of competitive benefits to companies that are looking for experienced developers. Ukrainian Ruby outsourcing companies boast a big talent pool of Ruby developers that can create cutting-edge web applications and provide services to meet the most specific business requirements. They are eager to participate in challenging projects applying the latest technologies and frameworks. Ukraine has a vibrant Ruby community with various events and conferences. So if you are looking for a professional Ruby/Ruby on Rails development team which provides high-quality development services at moderate prices, opt for Ukraine.

16 December 2016
Data Science outsourcing to Ukraine: pros & cons
Are you still hesitating about data science outsourcing? Your competition is not. While some choices make short-term impacts, others make lasting ones. Thus, how we make these choices is critical to o...