How to partner with top offshore Python developers?

PYPL index states that Python was the most popular programming language as of February 2021. According to SlashData, there are now over 8M Python developers in the world.

However, in some countries, the demand for Python experts is surpassing the supply. For instance, according to LinkedIn, there are over 145,000 open Python jobs in the USA, and employers struggle to find the right specialists to meet the job requirements. Thus, many companies opt for offshore Python development.

But where to look for trusted offshore Python developers, and what skills should they possess? Let’s find out together.

Where to look for offshore Python developers: Eastern Europe 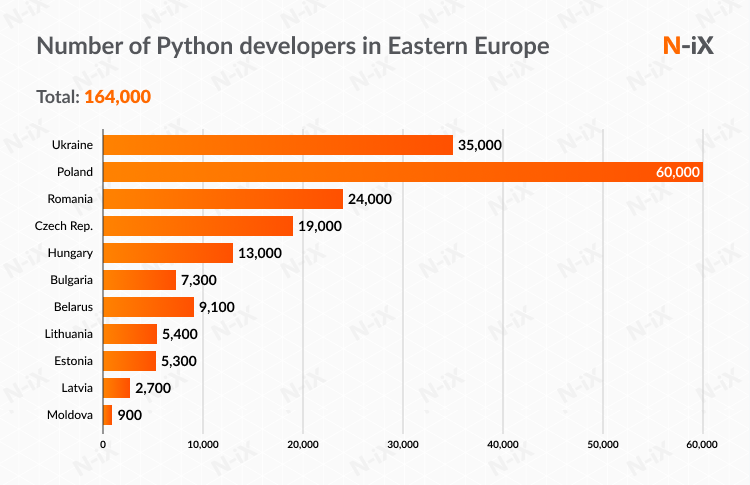 Why look for offshore Python developers in Ukraine?

As of April 2021, LinkedIn lists 35,000 offshore Python developers in Ukraine. According to the DOU (Ukrainian media for developers) survey, Python has made it to the top five most used programming languages in Ukraine. What’s more, out of 60% of Ukrainian developers that plan to learn a new language, 20% want to learn Python. Thus, the Python community experiences a regular talent inflow.

According to the DOU survey, Python has become the second most popular programming language Ukrainian developers use as an additional language. 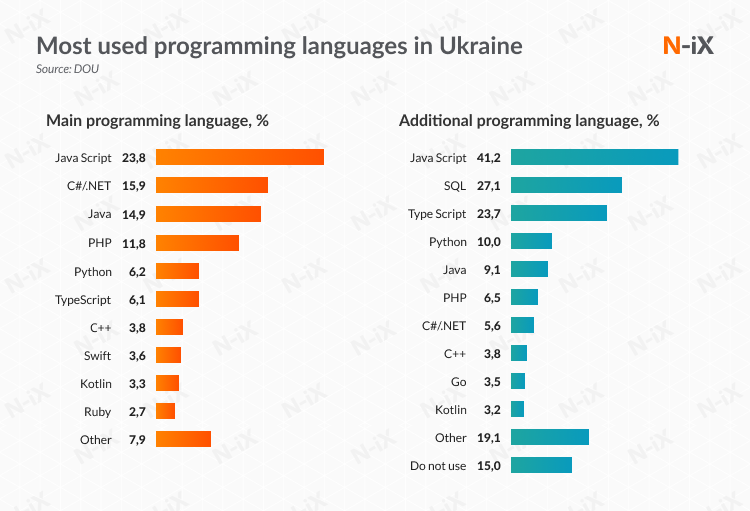 To top it off, Ukraine boasts a strong computer science education. In universities, Python is on the curriculum from the first year on. Master’s programs also include training students in data science, machine learning, and artificial intelligence. For example, there is a Computer Science program specializing in Data Science program at Ukrainian Catholic University.

What’s more, there are specialized courses for developers who want to improve their Python skills. Many IT vendors offer traineeship programs to prepare new hirees.

Also, Ukraine boasts a strong Python community that helps share knowledge. For instance, Ukrainian companies organize many Python-related conferences, such as PyCon, Level Up! Week: Python Day, PyMeet, and many others.

Why look for offshore Python developers in Poland?

As of April 2021, LinkedIn lists 70,000 offshore Python developers in Poland. 32% of offshore Python programmers in Poland claim to know Python, according to the Bulldogjob survey. What’s more, Python has made it to the top three most popular programming languages for those entering the market. 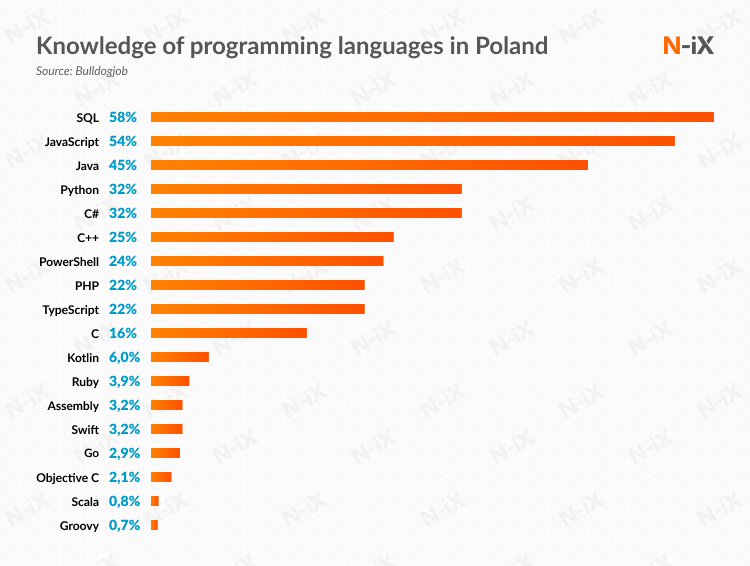 Different rankings recognize Polish developers' coding skills. For instance, software engineers from Poland have made it to the 5th place in TopCoder Rating and to the 3rd place in SkillValue ranking.

Where to look for offshore Python developers: Asia

Asia is home to a large talent pool. India and China house the most significant number of offshore Python programmers in the region. So, now we will view these countries in more detail.

Why look for offshore Python developers in India?

India is home to over 1M offshore Python programmers. Bangalore, Chennai, Mumbai, and Delhi house the lion’s share of these professionals.

Indian developers have made it to the top 10 most skilled software developers worldwide, according to the ranking by TopCoder. SkillValue ranks them 35th among 100 countries across the globe that house the best developers.

What’s more, Indian students are interested in getting a university degree, as those who possess a master’s degree can get a 68% higher salary than those with a course certificate. 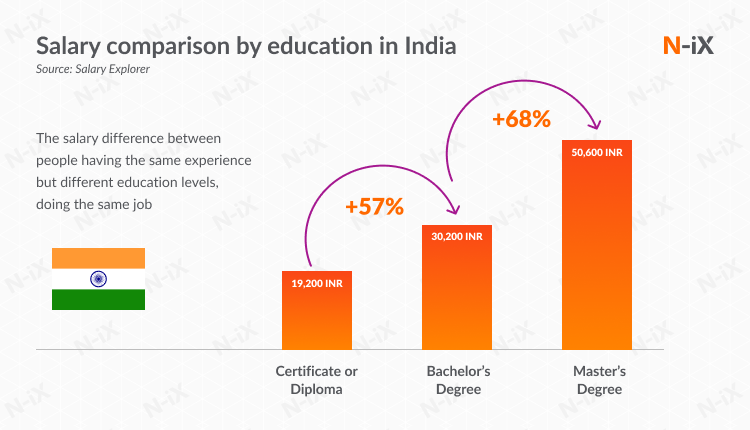 Why look for offshore Python developers in China?

Chinese developers have made it to the fourth place among the most skilled software engineers across the globe, according to the ranking by TopCoder.

Like in India, in China, salaries depend heavily on a degree. A candidate with a master’s degree can expect a 68% higher salary than one with a certificate. 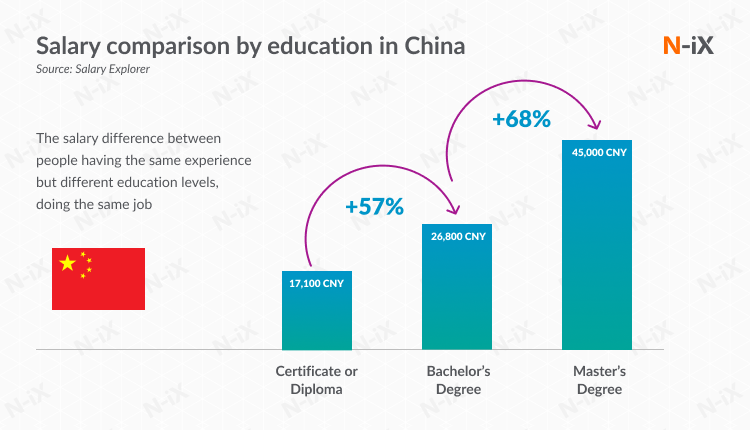 Eastern Europe and Asia are the most alluring spots to look for offshore Python programmers. Now, let's take a look at what skills Python developers should have.

An experienced Python developer should:

Now, let’s view businesses that have already opted for offshore Python development and benefited from it.

Discovery Limited is a South Africa-based financial services group. The company offers a range of financial solutions to both individuals and businesses. We work with Discovery Invest, a part of Discovery Limited, which offers Investment and Pension fund products.

The client needed a partner with robust big data and cloud expertise. We are responsible for building the functionality that calculates additional benefits for certain products in the investment segment.

Discovery Invest encourages and rewards clients for investing longer, living well, and withdrawing wisely. They wanted to find a way to consider the customers’ state of health on an ongoing basis and to inspire people to adopt better lifestyle behaviors.

Adhering to adopting better lifestyle behaviors, our client works on new products to encourage its customers. The client engaged the N-iX team to develop a new solution. Our task is to develop REST APIs and design a pipeline for running, processing, and returning data to the source databases.

Also, as the data was stored on-premise, which is more expensive than the cloud, the client needed a cloud migration plan. Thus, the N-iX team has developed a clear cloud migration roadmap and started its implementation.

This company has 3.2 million customers in categories such as safety, material handling, and metalworking, along with services like inventory management and technical support. This client needed a partner with experience in big data to boost their engineering capabilities. Also, they needed to cut operational costs with the help of cloud migration.

The client requested developing a major big data platform that would contain data from all the company's departments.

Thus, our engineers have created a platform to store all the client's data in one place. Thanks to this solution, the data management is improved, and the whole process has sped up. What’s more, N-iX has fully automated the data extraction process from different sources and covered all the following issues:

Currently, our team manages all of the processes for processing a large amount of data. The use of Snowflake and Airflow allows us to automate the data extraction process.

The N-iX team has helped the client reduce the production cost because the client replaced half of the contractors (that received approx. $150 per hour).

Switching to the cloud allowed the client to save the cost, as keeping the Hadoop cluster is more expensive than a properly organized cloud.

Vable is a UK information management company set up in 2004, aiming to develop the first newsletter solution for law firms.

N-iX development team is engaged in full-cycle software development of the new, cloud-based version of the product, which enables further data analysis and aggregation.

At the initial stage, our team worked on the new software architecture. We helped the client migrate from the monolith to microservices to make the solution more scalable and flexible.

Now, there are over 50 microservices: a part of them are written in Python because some of the tasks like crawling RSS feeds are better to manage in Python.

As of today, N-iX has helped the client to:

The partnership is ongoing.

Origin Enterprises plc is a leading agri-services group providing integrated agronomy services. The company is based in Ireland.

The client needed a technology partner to build a set of solutions, using such technologies as Python, Java, Ionic, and Angular.

The applications serve as digital platforms for farmers, agronomists, and product and credit providers. They offer comprehensive functionality, from optimizing cooperation between parties to efficient estimation and recommendations in agriculture.

Our developers have created a mobile app and several web applications for Origin Enterprises. For example, the N-iX team has developed a progressive web app that integrates modern web capabilities and the benefits of the mobile experience.

N-iX started its partnership with AlienVault in October 2015, when the client was planning to develop a new product and needed a partner to address multiple technical tasks with existing products.

While working on this project, we used and configured such tools as Suricata (for NIDS), OSSEC agent (for HIDS), OpenVAS (vulnerability scanning), Nmap (asset discovery and scanning). We performed correlation engine improvements. It was written mainly in C/C++, whereas Sensors code was mostly in Python; web UI was written in PHP. MySQL was used as a database, with a current snapshot of OTX Threat DB being stored in Redis.

The N-iX team helped stabilize the product by releasing dozens of minor and major system patches and providing timely fixes. Our team grewew from 4 engineers to 14 in about a year. To accelerate time-to-market, we launched automated tests by extending the AlienVault Robot Framework and writing new automated test cases.

20 February 2019
How to find Python developers in Ukraine: skills, tips, and more
The Central Intelligence Agency has used it for hacking, Google for crawling web pages, Pixar for producing movies and Spotify for recommending songs. – The Economist The Economist resear...