Ukraine is one of the top IT outsourcing countries in Eastern Europe. It is home to one of the biggest IT communities in Europe, and it is one of the most attractive destinations for outsourcing software development. The country is listed among top 10 emerging-market locations of offshore services. ...

Ukraine is one of the top IT outsourcing countries in Eastern Europe. It is home to one of the biggest IT communities in Europe, and it is one of the most attractive destinations for outsourcing software development. The country is listed among top 10 emerging-market locations of offshore services. The Ukrainian market offers an extensive talent pool and wide-ranging expertise in various technologies and industry domains. Thus a wide range of globally recognized brands cooperate with Ukrainian software developers. What’s more, market leaders like Microsoft, Samsung Electronics, Apple, Wargaming, Boeing, Skype, eBay, Siemens, IBM have R&D centers in Ukraine.

We’ve collected data to illustrate 8 proven reasons to cooperate with Ukrainian software developers. Let the facts speak for themselves:

Ukraine was ranked first in Europe in the sector of IT-outsourcing in 2016, according to IT Outsourcing News. The country was included in Gartner’s top 30 offshoring and outsourcing destinations. What’s more, 13 companies located or operating in Ukraine (including N-iX) are ranked among the world’s best IT service providers. 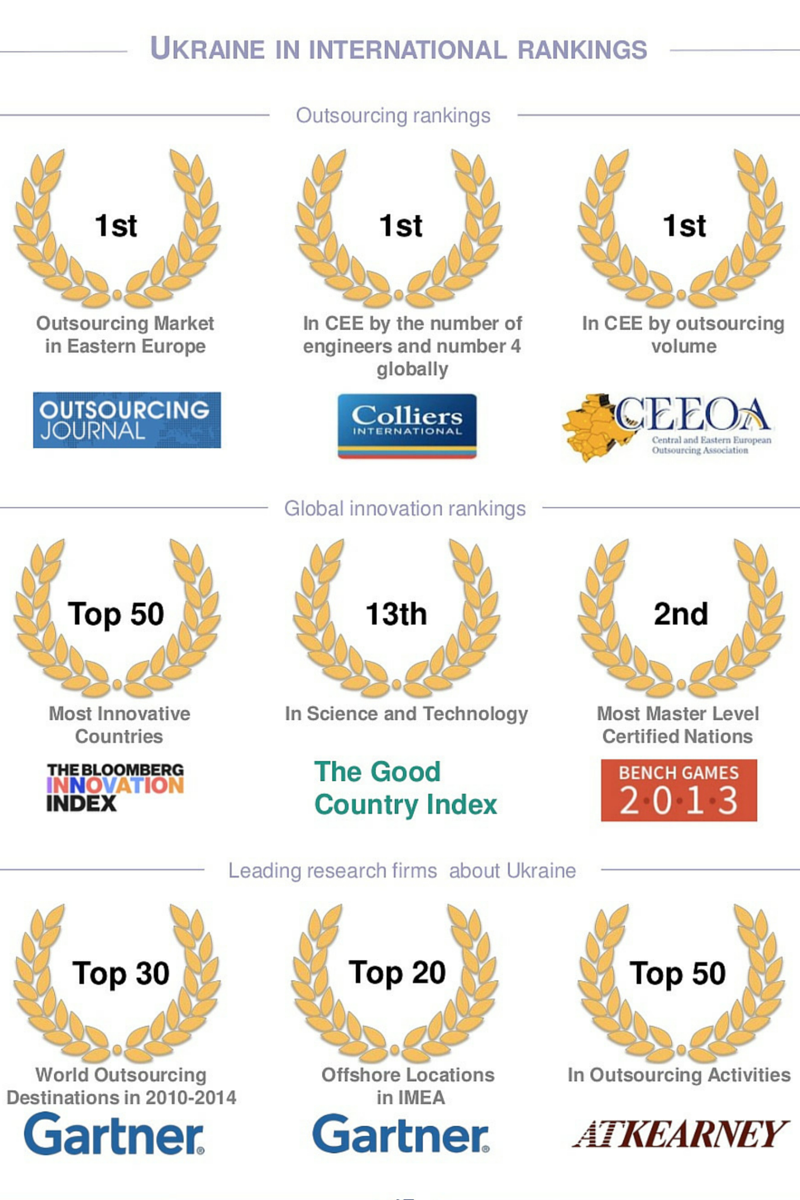 Ukraine houses the largest number of IT experts in Central and Eastern Europe. According to Colliers International, Ukraine is 4th in the world by the number of IT specialists. It is home to more than 1,000 software development companies. We can see the exponential growth of the IT community in Ukraine. According to some resources, there are over 230,000 people working in the sphere, including freelancers. The UADN report sounded the number of 100,000 specialists but the number has considerably increased since early 2016 when it was published. The number of specialists has gone up 2,5 times since 2011.

There is a wide range of companies with expertise in different domains, ranging from healthcare to automotive. Ukrainian software engineers are well-versed in a wide range of technologies. According to DOU.UA Programming language popularity ranking as of January 2016, Java (26.3%), C# (15.4%), JavaScript (13.8%), PHP (13.1%), and Python (8%) are the most widely used programming languages by Ukrainian developers. The country is the world’s leader by the number of Unity3D developers and experts in C++. Also, there is a great number of specialists in rather scarce programming languages and technologies such as Hybris, Erlang, Go, Scala, and others in Ukraine.

3.The most skilled software developers

Ukrainian software developers are among the most skilled programmers in the world, and they actively participate and take leading places in international coding contests. The country is currently ranked 5th in Top Coder Rating and 11th in the world by the number of the most skilled software engineers, according to HackerRank. Our developers take the lead in the global programming competition Microsoft Imagine Cup 2017, which is held in Kyiv, Ukraine. 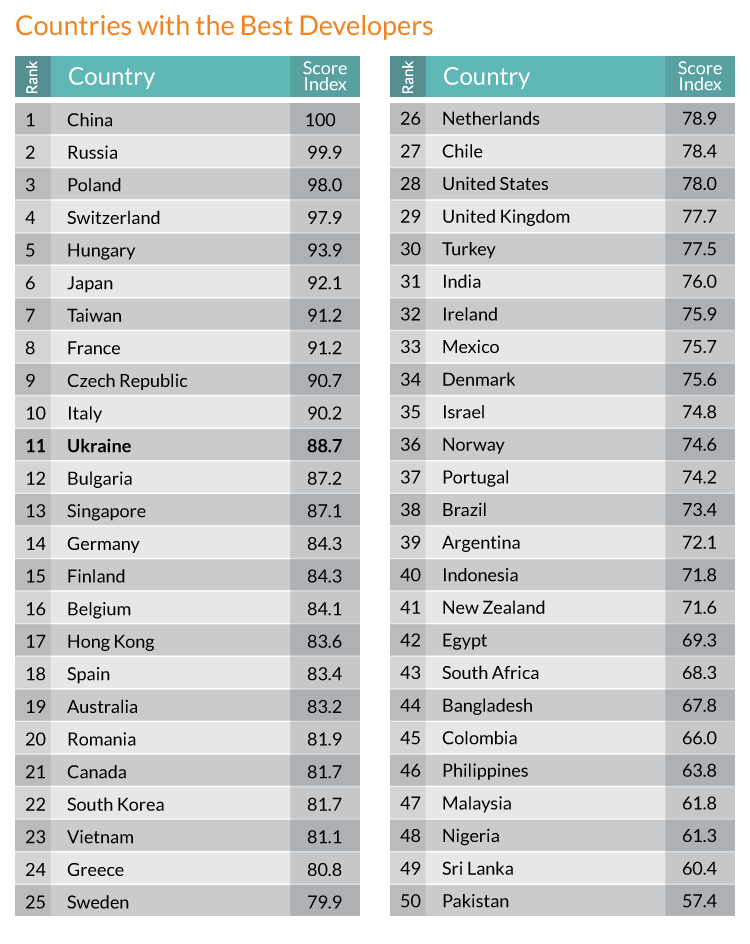 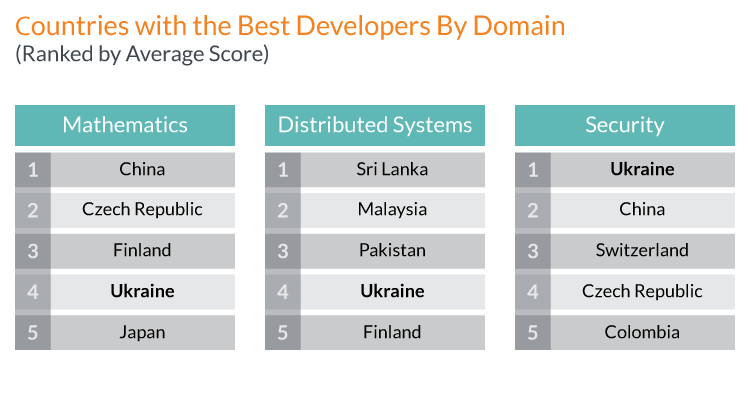 4. High level of IT education

Ukraine is the 1st in CEE by the number of graduates who enter the labour market. Every year, over 150,000 of students graduate from higher education establishments. More than 36,000 highly qualified professionals graduate every year with STEM-related degrees. There are about 402 universities and colleges in Ukraine, and many of them have IT subjects in their curriculum. What’s more, Ukraine was listed among TOP 10 countries with the greatest number of certified IT professionals. 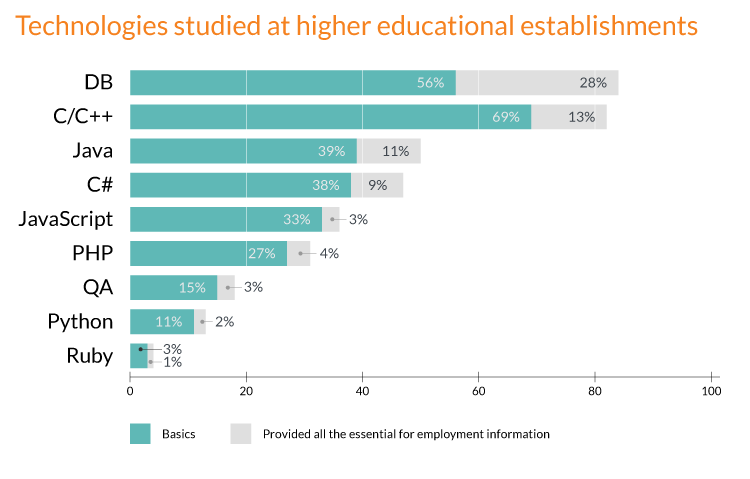 Source: Statistics of IT Education in Universities

Over 75% of Ukrainian IT professionals have a university level degree, and over 6% – a Masters or PhD. Ukrainian IT specialists often take certifications of Microsoft, RedHat, Oracle, Cisco, IBM, Novell, Sun Microsystem, PMP, Scrum, and others.

Ukrainian IT companies launch their own courses, encourage their employees to get certified and reimburse their educational programs. Also, IT experts guest lecture at universities and promote new directions. That’s why new courses on Data Science, AI, IoT have been launched in Polytechnic University, Ukrainian Catholic University, and Lviv Ivan Franko National University.

Around 80% of developers have a conversational level of English and are well-versed in technical vocabulary, so the risks of language barrier and communication bottlenecks are reduced to the minimum. More than 40% of Ukrainian developers speak fluent English. About 39% of respondents rate their English as intermediate, yet with a good knowledge of technical subjects. That is an essential factor for effective cooperation and mutual understanding.

What’s more, many IT companies have optional and obligatory English courses in-house, and they either fully or partially reimburse English education.

6. Vibrant R&D activity and a wide range of tech events, startups, and partnerships

Ukraine is home to 100+ R&D offices of market-leading companies from a wide variety of industries including telecoms, gaming, healthcare, fintech, retail, and e-commerce. Such global leaders as Boeing, Aricent, Huawei, Siemens, Oracle, Apple, Microsoft, Deutsche Bank, Skype, eBay, IBM have R&D facilities in Ukraine. The USA has the largest share of R&D partnerships involving Ukraine. It amounts to about 45% of companies. Kyiv is the key location for setting up R&D offices. Other popular cities include Lviv, Dnipro (Dnipropetrovsk), Odesa, Kharkiv, and Vinnytsia.

There are many NGO’s and private IT organizations which foster the development of IT industry in Ukraine, such as BrainBasket Foundation, Kyiv High Tech Cluster, Kharkiv IT Cluster, Lviv IT Cluster, and more. Lviv IT Cluster is an organization that brings together the largest IT companies, universities, and local authorities to grow the IT industry and conduct systematic changes in the business environment of the city and the country. The cluster’s goal is to promote IT disciplines at universities, organize events, represent Ukraine in international IT communities, research the IT market, work with local and state authorities.

Lviv IT Arena 2017, held in Ukraine, is one of the biggest international IT conferences in Eastern Europe. It will bring together 2000+ IT enthusiasts from more than 12 countries: top managers, programmers, designers, project managers, business analysts, investors, government officials, entrepreneurs etc. N-iX has always supported the event, and this year the company takes part as a co-organizer.

7. Favourable geographic location. Proximity to Western European and US markets

Ukraine has an easy transportation access to all points in the world. There are many international airports connecting Ukraine and most US, European, and Asian cities. In fact, it takes only 2-3 hours to get from Ukraine to the UK and other Western European countries. Time zone in Ukraine is GMT+2, which means working hours in Europe and Ukraine are virtually the same. Those factors combined with the high level of cultural affinity with European mindset and business ethics foster mutual understanding and considerably facilitate partnership.

According to Bloomberg’s 2015 list of Top 50 Most Innovative Countries, Ukraine occupies the 33rd place, having gone up by 17 positions compared to 2014. Ukraine’s ease of doing business ranking has improved by 4 spots compared to the previous year.

The country considerably simplified the taxation system of the IT industry in 2016. What’s more, established software development companies in Ukraine operate in full compliance with all European IP and information protection regulations and rules.

Many globally recognized businesses address Ukrainian software developers for a variety of reasons. The Ukrainian IT community is growing steadily, and the quality of services is continuously increasing. The country is proud of immense IT talent pool, wide-ranging expertise, vibrant R&D activity, a myriad of partnerships with globally known brands, favourable location and business climate. Consult with our experts and start your software development partnership with the best Ukrainian IT specialists.

Also, find out more about top IT outsourcing destinations in Eastern Europe in our recent report.

Top IT outsourcing destinations of Eastern Europe: Market report
Tech talent is the new oil. According to the KPMG survey, the global shortage of technology skills is soaring. There are more than 250,000 open jobs for software engineers in the United States only. A...

An honest look at Ukrainian software developers: cross-cultural communication in outsourcing
When it comes to IT outsourcing, the fear of miscommunication is one of the most common ones. Business owners have their doubts about building offshore dedicated development teams, as they know very l...

Software development outsourcing to Eastern Europe: a complete guide
About the Guide In today’s era of digitization and rapidly changing business climate, few decisions are as critical to the success of an organization as selecting a trustworthy IT vendor. In ...