Kyiv & Lviv IT companies: how to find the best partner in Ukraine?

Global IT outsourcing market is thriving, and choosing the right software development destination is a complicated process. If you are considering Ukraine, this article will help you learn more about two primary hubs, provide you with a list of top IT companies in Kyiv and Lviv, as well as find out some of the differences between the two cities.

3 fundamental reasons to outsource to Ukraine

Here’s why you should pay attention to Ukraine to find a potential IT outsourcing partner: 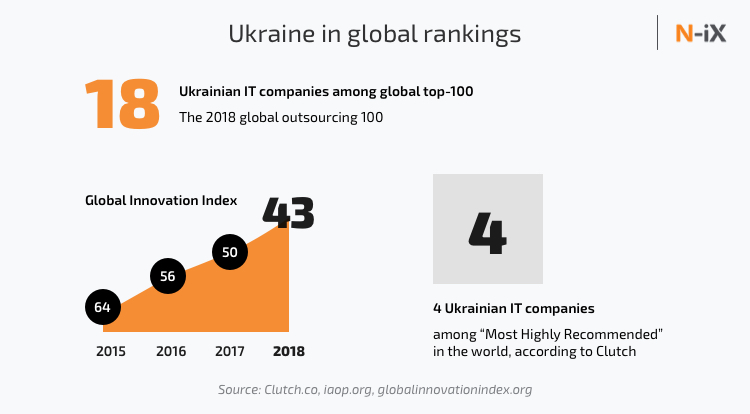 Therefore, if you choose to outsource software development to Ukraine, you are not only saving money but also getting access to an extensive tech talent pool.

Kyiv and Lviv as primary destinations for IT outsourcing to Ukraine

Kyiv and Lviv are considered the top locations for IT outsourcing in Ukraine and they are home to over half of all Ukrainian developers. Here are the top 5 reasons to choose either of these cities.

Overall, the tech talent pool reached 184,700 professionals in 2018 and over half of these specialists reside in Kyiv and Lviv. As of the beginning of 2019, these two cities are home to more than 97,000 developers and technical experts [2,3]. According to the same source, the majority of those developers work for either outsourcing (46%) or outstaffing (11%) companies. Simply put, you can gain access to roughly 55,300 experts while outsourcing IT services to Lviv and Kyiv.

Ukrainian tech community understands the need for an alliance as it allows sharing the knowledge and building stronger connections. Mainly, such cooperation exists in the form of professional clusters that organize meetups, tech conferences, informal gatherings, etc. For example, Lviv IT Cluster unites 82 companies, and there are 37 firms in Kyiv IT Cluster.

It is also worth mentioning that Lviv was included in the top 20 fastest-growing tech hubs in Europe, along with Zug, Bern, and Newcastle. It’s growth increased by 57% from 2017 to 2018.

An average Ukrainian salary equals around $350 per month, while software developers’ salaries can be 5 to 10 times higher. Dou.ua reports that software developers in Kyiv receive 5-10% higher salaries compared to their colleagues in Lviv. The only exception is that Java developer in Lviv earns 5 to 15% more than in Kyiv.

Having the same amount of money, one can afford different lifestyles in various cities. For example, a developer earning 1,000 in Chicago can barely survive, while in Ukraine such salary is 2.5 times higher than an average national one. It means that developers from Ukraine are more likely to be satisfied with the balance between earnings and expenses. For better understanding, let’s take a look at Numbeo.com data that allows you to compare and interpret the expense rates in major cities all over the world. They used the cost of living in New York to create a baseline for comparison. For example, Zurich is approximately 20% more expensive compared to NY. 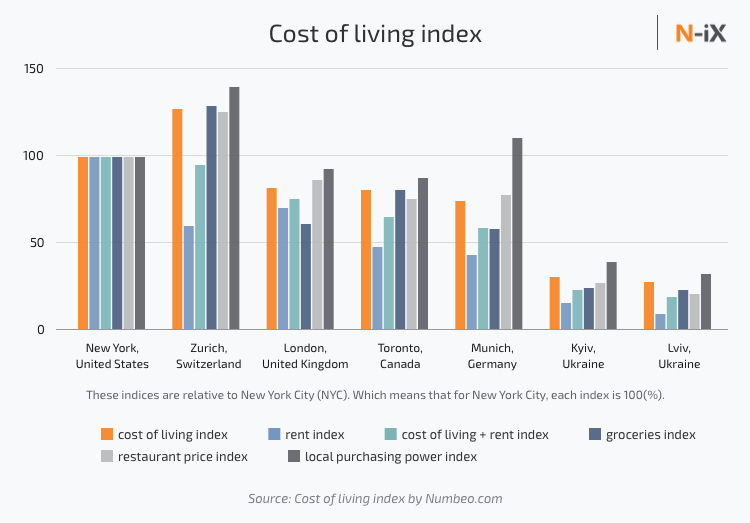 Kyiv and Lviv are 60 to 80% more affordable compared to NY. If we take a closer look at the primary expenses one faces in these cities, we can see that Lviv is usually cheaper compared to Kyiv. 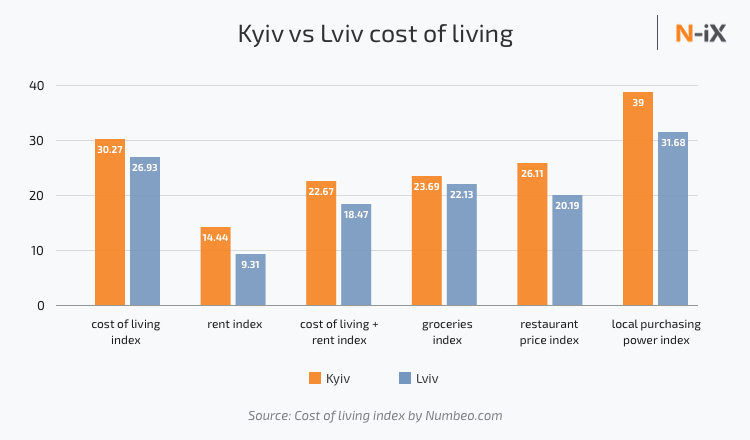 The most significant difference appears in rent and dining indexes. Moreover, Lviv is considered to be the cheapest city among 45 major cities in Eastern Europe.

What does it mean for outsourcing?

182 IT companies have offices in either Kyiv, Lviv, or both

There are over 118 companies with over 50 employees that have offices in Kyiv, while Lviv hosts 64 companies. Some of the companies have offices in both cities as well as in other IT hubs in Ukraine. If we are talking about top-level spaces in Kyiv, the rent varies between $20 and $38 per square meter with $7-$9 in operational costs. So-called B-class offices are usually less expensive. 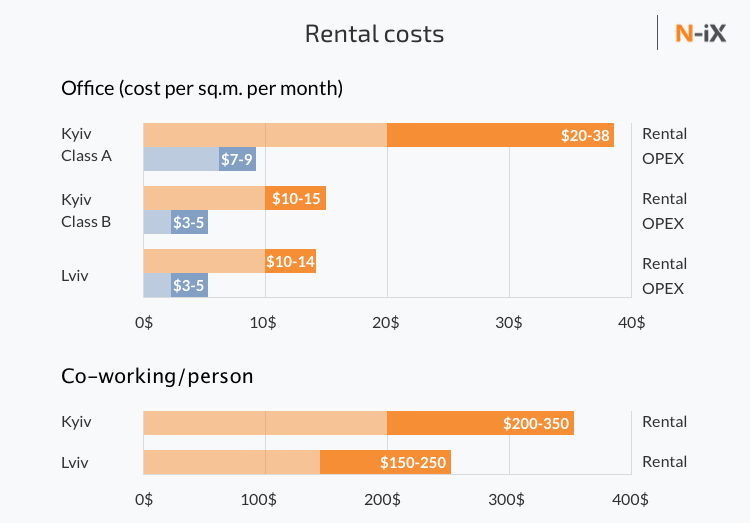 What does it mean for you?

In most cases, expenses for office rent are included in the price you have to pay for the services of your developers, so choosing the location with moderate prices will help you reduce the overall costs.

Clutch.co has calculated that Ukrainian software development companies are working within several specific domains that include finance, enterprise solutions, e-commerce, education, health, and travel. On the graph below, you can see the representation of these domains. 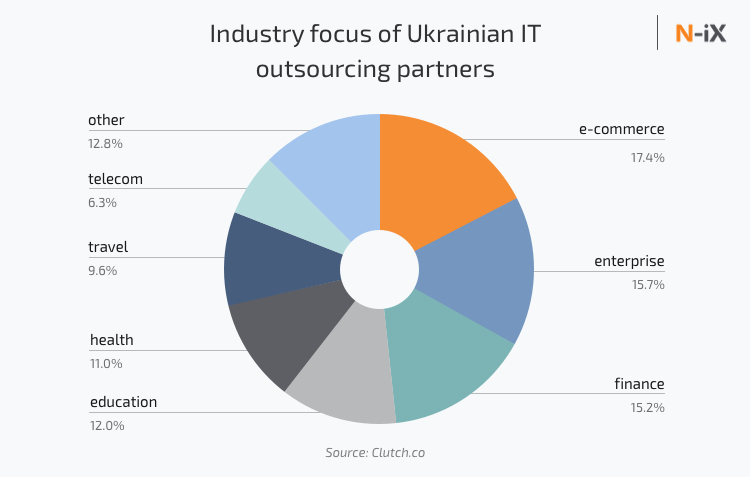 There are several IT companies that work across multiple domains. Here is an example of the domain expertise of Ukrainian IT companies. 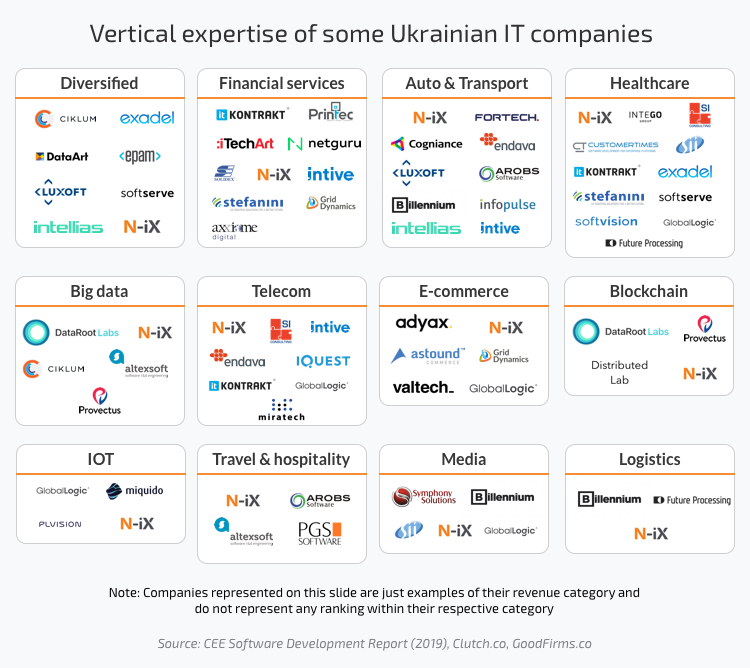 However, we have noticed that there are certain industries that local companies mostly work with in Kyiv and Lviv.

4 things to pay attention to when choosing the city

If you have chosen Ukraine as an outsourcing destination, have you thought about the city you would like your team to work in? There are two major hubs in central and western Ukraine that accommodate over 52% of all Ukrainian developers - Kyiv and Lviv. Usually, a company that is looking for a potential outsourcing partner should pay attention to:

Despite their similarities, Kyiv and Lviv are different on so many levels. Kyiv, the capital, hosts more companies, has higher rent and cost of living index. Whereas Lviv has a more active tech community, lower rents and is the cheapest major city to live in Eastern Europe [1]. 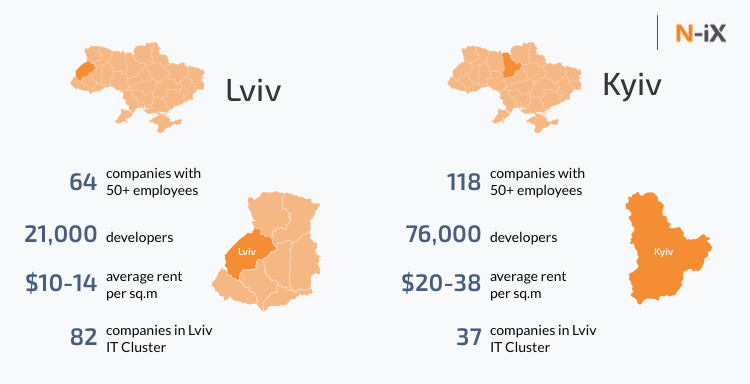 Moreover, both cities have a decent number of transborder flights, connecting them with multiple destinations all over Europe. It takes 2 hours to get from Kyiv to Berlin, 3 hours to fly to Rome, and 10 hours to get to New York. Lviv also welcomes a long list of flights from Austria, Poland, Germany, and a number of other locations. So in order to choose the city that fits your needs, pay attention to the domains that prevail in the region as well as the overall reputation of the company.

IT companies in Kyiv

When it comes to Ukraine, Kyiv IT companies represent multiple domains. There are several IT outsourcing companies in Kyiv that are diversified and may possess expertise in several sectors. We have researched GoodFirms and Clutch.co to create a list of the IT companies that have their headquarters in Kyiv and might be a good fit within a certain domain. 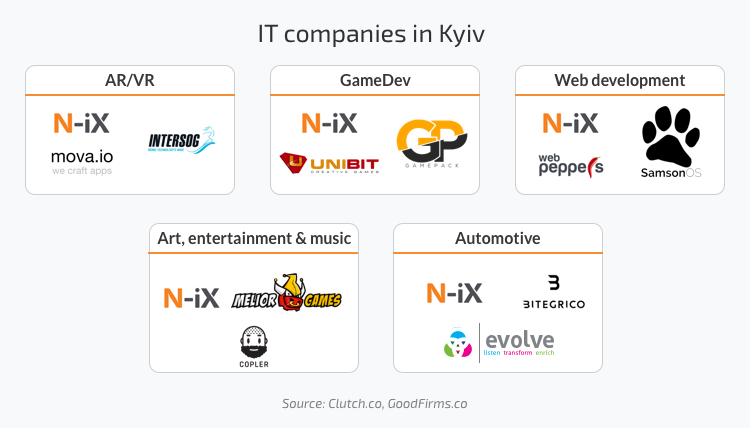 Kyiv IT companies have potential access to a bigger pool of developers, however, the number of trustworthy companies recommended by Clutch and GoodFirms is almost the same as in Lviv. Also, the competition for talent is higher in Kyiv.

IT companies in Lviv 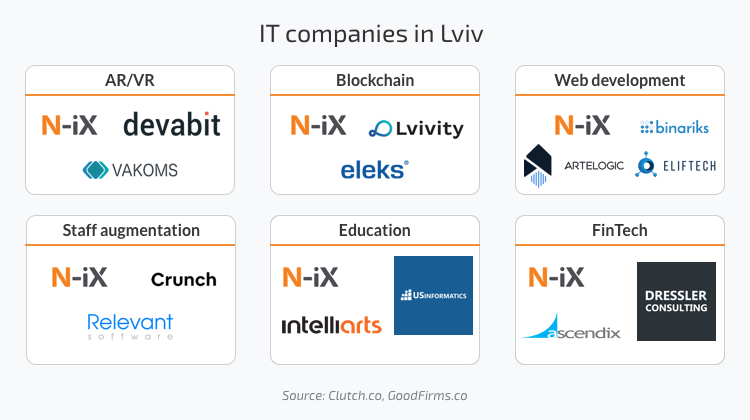 In terms of outsourcing, Ukraine, and Lviv in particular, has a wide range of companies to choose from. So you need to find a company that has experience working in a specific domain, check their portfolio, and start a successful cooperation.

Overall, if you are looking for a reliable outsourcing partner, Ukraine is one of the greatest options for its cost, skills of developers, and location. Both cities are well-established tech hubs and have a great pool of developers. In order to find the right location, pay attention to all the factors.

5 reasons to choose N-iX, while looking for IT companies in Kyiv and Lviv

Contact us right now if you have any questions on hiring developers in Kyiv or Lviv!

18 August 2022
All you need to know about IT staff augmentation: Ultimate guide
The demand for qualified software developers is growing faster than ever. Companies in the USA and the UK often fail to find qualified candidates to meet their tech needs. The CNBC quarterly poll show...