Offshore software developers: All you need to know in 2020 and beyond

The 21st century is the time of great technological advances. And it is also the time of the greatest tech talent shortage that companies around the world have seen. Even though the pandemic freed up some of workforce, it’s still not enough to fill in the needs of the market. So many companies choose offshore destinations to tap into a bigger pool of experts, extend their development capabilities, and access the expertise they need. In this guide, we are going to take a look at three most popular offshore regions: Eastern Europe, Asia, and South America (incl. Mexico). We will explore:

What is the real business value of offshore developers for your company?

Where to find the best offshore developers in the world?

According to Evans Data Corporation, there were 26.4M software developers in the world in 2019 and this number is expected to reach 28.7M by 2024. And while the US, Western Europe, and the UK have their own significant tech talent pools, the competition for this talent is tough. That is why, companies refer to offshore markets instead. 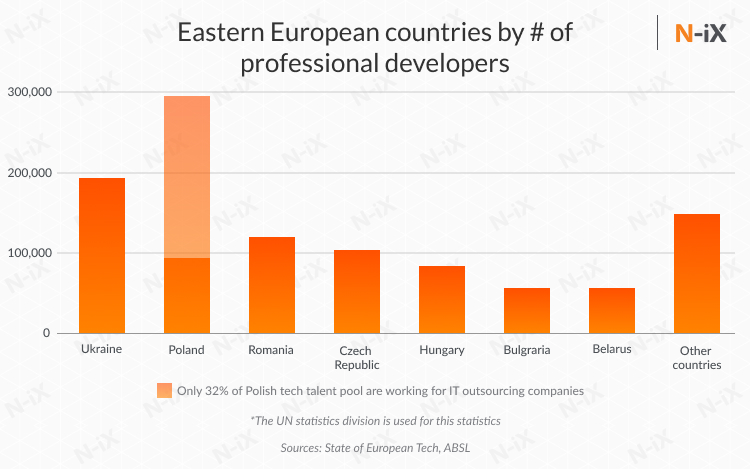 Moreover, many Eastern European countries are recognized as reliable offshore destinations. Seven countries were included in the top 30 list of the 2019 A.T. Kearney Global Services Location Index of the best outsourcing locations.

The Asian tech talent pool reached almost 4M in 2018. The top countries with the largest number of professional developers are India (2.75M), China (590K), and the Philippines (190K). 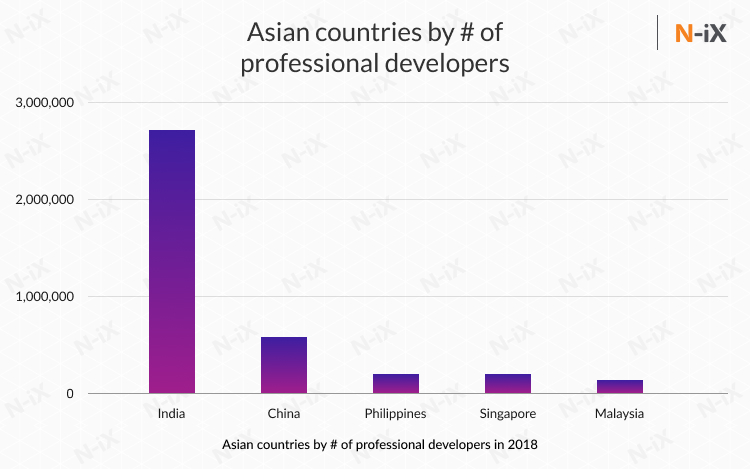 Asian specialists have been a sweet deal for companies that were looking for offshore developers for a long time. The A.T. Kearney Global Services Location Index recognised India, China, and Malaysia as top three locations for availability of tech talent and financial attractiveness.The Philippines has lost 3 positions, compared to the previous year, but still remains an excellent destination for BPO outsourcing. However, the region was highly affected by the COVID-19 pandemic. Many countries, including India, have struggled during the lockdown, as they could not deliver the same results within the work-from-home scenarios.

Among the Latin American countries, the best outsourcing countries by the number of professional developers are Brazil, Argentina, and Mexico with a combined talent pool of over 700,000 developers. 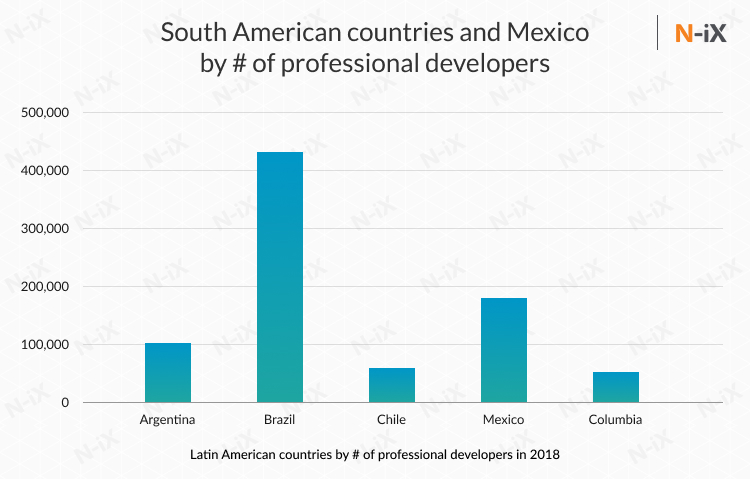 These five countries have also been included in the 2019 A.T. Kearney, ranging from 9th to 30th positions, with a slight decrease in ranking compared to previous years.

However, availability of tech talent is not significant on its own. Let’s take a look at what every region can offer in terms of tech and industry specialization.

Industry and tech expertise by region

SourceSeek report reveals that among the three discussed regions, Eastern Europe has the most versatile expertise. Vendors there work with companies in security, automotive, and travel & tourism industries. Asian countries have great expertise in real estate and entertainment. 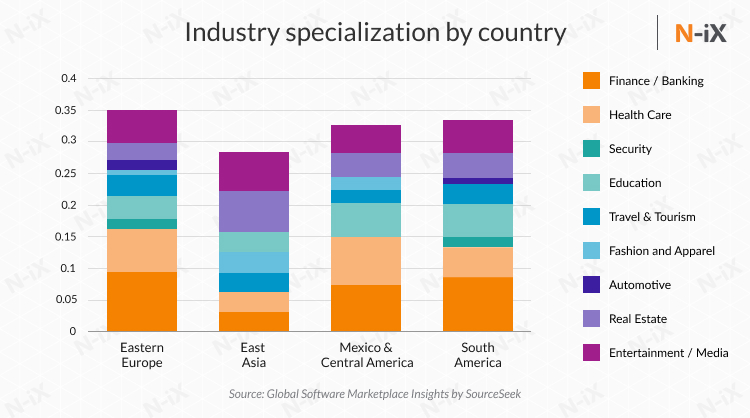 Mexico and countries in South America have expertise in entertainment, financial, and education industries.

As for the technology expertise, Asian countries are known for the prevailing number of PHP developers, as many companies outsource web development there. Eastern Europe has a versatile tech portfolio and is known for delivering enterprise-level solutions. 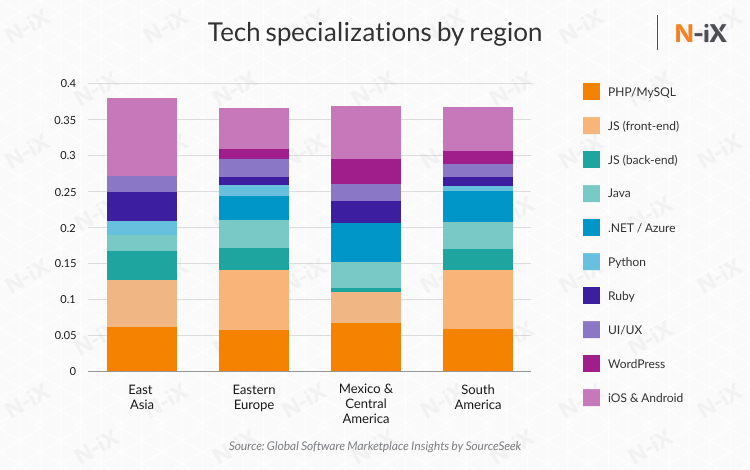 If you are looking for offshore developers who work with specific tech stack or possess a particular expertise, it is also a good idea to check for availability of such experts in the region. We have created a PDF file that offers an estimation of the number of offshore software developers by major technologies.

Let’s talk about developers’ salaries. According to Payscale, the average salary of a software developer in the US (with 2-5 years of experience) is $70,000 a year. An offshore software developer  with similar qualification and experience earns between $7,000 and $35,000, depending on the location. If you take billing rates, you can save as much as $10-35K a year per developer. The difference in rates of onsite and offshore developers can be even more impressive when we are talking about rare expertise or more years of experience. Please remember, that lower cost of services does not mean you get lower quality. Most outsourcing locations have a lower cost of living; thus, they can offer lower price of their services. 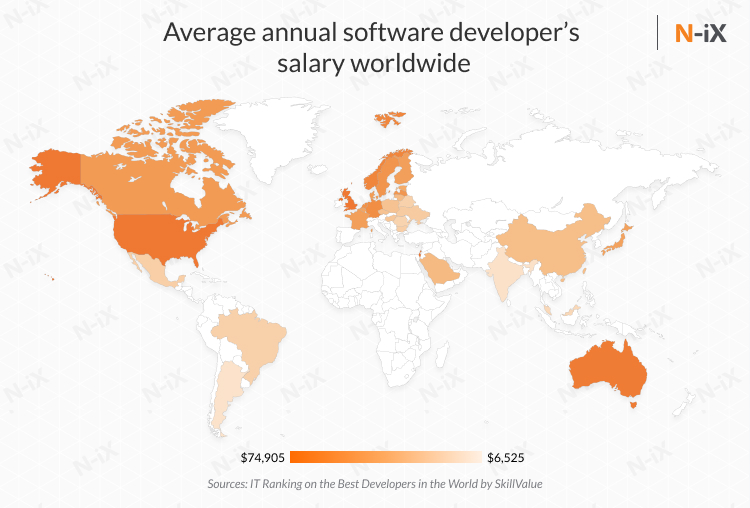 Another aspect that often drains the budget is the long staffing process and ineffective onboarding. Did you know that nearly 60% of US employers reported having troubles filling specific job openings within 12 weeks or more, which resulted in over $800K in additional annual expenses? Whereas, the typical staffing time for offshore software developers varies between 3 and 7 weeks.

Read more: How to save your software development budget when outsourcing

The 2020 ranking shows that among the three discussed destinations, Eastern Europe has the greatest number of top-notch universities. Thus, the access to education (and tech education in particular) is better in EE countries. 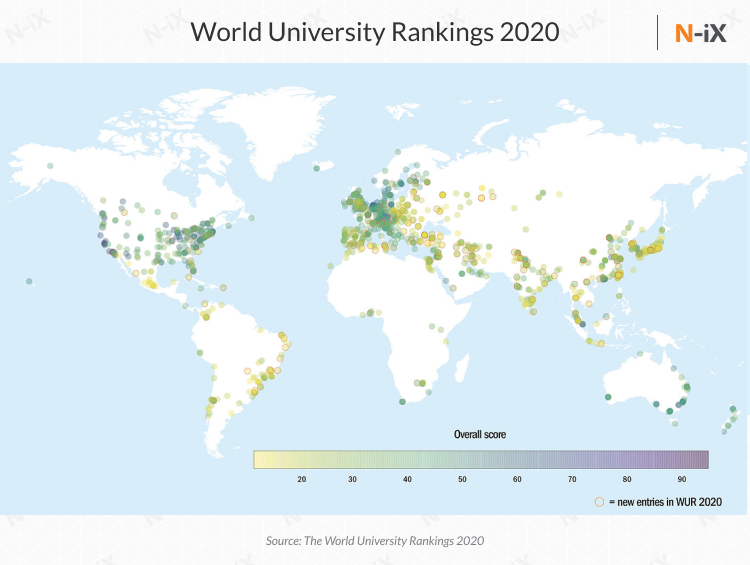 Eastern Europe has an average 99.65% literacy rate, whereas in South America and Mexico this score reaches 95.7%,  and in Asian countries  - 90.6% (primarily because of India).

According to the 2020 EP EFI ranking, Eastern Europe has the highest score in terms of English proficiency, thus making the communication between you and your offshore developers much easier. 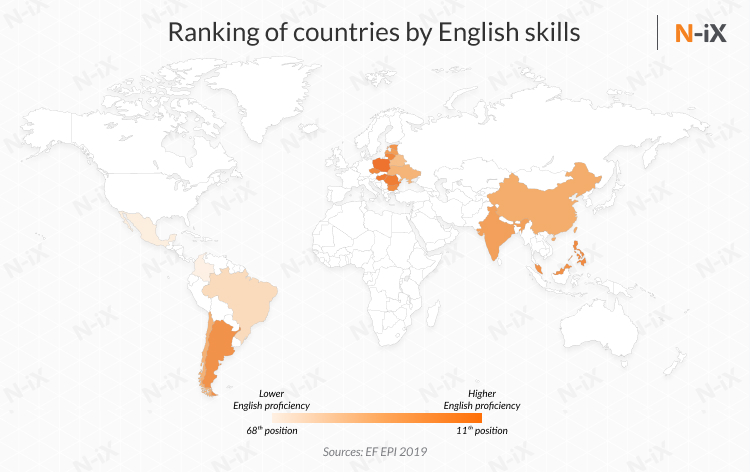 It is important to find offshore software developers whose culture matches your expectations. For example, Eastern European vendors are known to be a great cultural fit for companies from the US and Europe. In one of our articles we have discussed cross-cultural cooperation, based on the Hofstede Insights study. Find out more in a PDF file below.

An international SkillValue ranking by Pentalog offers an interesting perspective on the best IT skill sets per country in the world. As you can see, Eastern Europe ranks the highest in the overall skill ranking, as well as in rankings by technology. For example, five out of the top 10 places are held by Eastern European countries and four more countries are in the top 30 list. 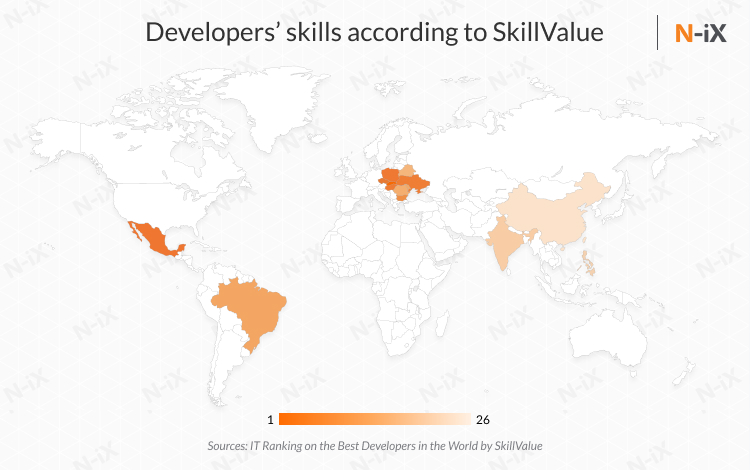 As you can see on the chart above, out of South American countries, only Brazil has made it to the list, ranking at the 20 place. Mexico was ranked 2nd in the general list and 18 in the Elite classification by test. As for Asian countries, India was ranked 35th and the Philippines - 38th, while Chinese developers took 43 place.

Another source, Hackerrank, offers a slightly different perspective. They’ve ranked China as number one, but the rest of the region received more than moderate scores. Eastern European countries have performed well, ranking between 3rd and 20th positions. 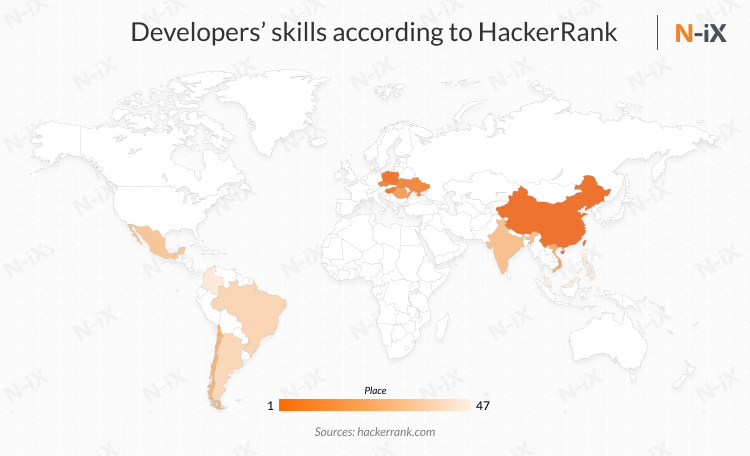 Once we have estimated the tech talent pool in every location and country, explored their technical and industry expertise, and evaluated their skills, it is high time to learn how to hire top offshore software developers.

How to hire the best offshore developers?

This step is important to evaluate the amount of work that needs to be done, the cooperation model that will best fit your needs, and the number of offshore developers that are going to be involved in the project. Example of questions to ask yourself:

Understanding what needs to be done will bring you to the next step - finding the right location. In one of our recent articles, we’ve discussed three main IT outsourcing destinations: Eastern Europe, Asia, and South America. Keep in mind all the crucial aspects while choosing the final destination:

Unless you are looking for a single developer to work on a small task, you most likely will need to find a company to work with. There are thousands of offshore software development vendors across the globe. Some companies have glorifying customer reviews, some are proud about their experience in every industry, and others have strong portfolios. You will also find vendors who offer insanely low rates, while others seem to exaggerate the cost of services.

We have created a step-by-step guide on how to choose the best offshore outsourcing company. 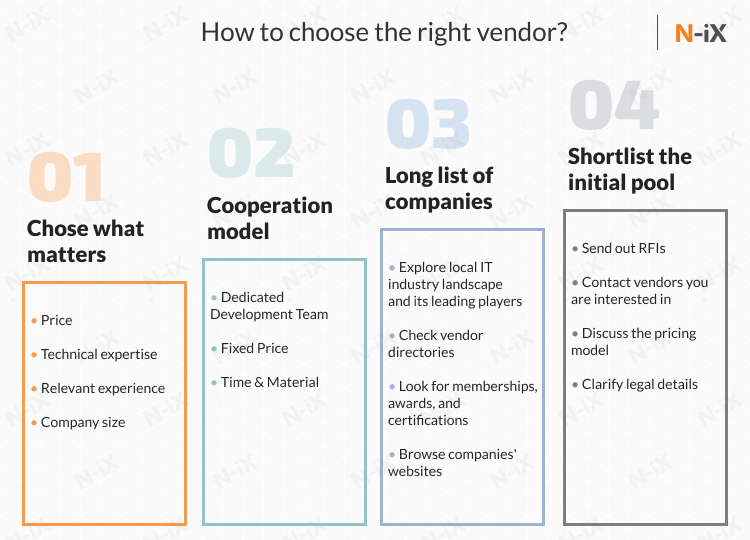 Once you have found the vendor, it’s time to negotiate a win-win contract and start working. By the way, you might also need to check our article on how to avoid contract loopholes.

If you want your company to succeed, it is important that your tech partner (and your developers) understands your business needs and vision. It will be for them to satisfy you, if they know your expectations. Don’t forget to share:

As you can see, offshore markets can offer a wide selection of experts within various tech stacks and industries. Asian offshore developers can be a great choice in terms of financial attractiveness, but might be a little bit of a challenge as there will be very small or now window for communication. Mexican and South American developers are known for nearshore development services for countries from the US. However, these countries have less developed infrastructure, compared to other destinations. Eastern European offshore software developers typically have both strong technical background and versatile expertise. Besides infrastructure development and significant improvement of tech education, this region has also adopted new technologies and created a thriving market of software development and IT outsourcing services.

Why choose N-iX to hire the best offshore developers?

Featured success stories
As a company with almost 20 years on the market, N-iX has been working with companies around the globe for a long time, establishing long-term partnerships across all many industries.

If you have any more questions about offshore developers, our expertise, or services we offer,  contact our experts!

05 June 2020
Offshore software development in 2020 and beyond: An ultimate guide
The beginning of 2020 has forced companies worldwide to adapt their operations to the new reality and re-evaluate strategies. Forced to adopt remote operations and work-from-home mode, ...