IoT is creating ample opportunities for businesses worldwide. However, its rapid adoption also brings a number of challenges. For the past few years, experts have been expressing concerns about the vulnerability and lack of basic security throughout the IoT industry. The ever-growing adoption of the Internet of Things solutions increased the risk of high-profile security attacks involving connected devices.

Global Markets state that the threat of Internet of Things data security breaches is fueling explosive growth in the global market for IoT security technologies. Markets and Markets forecast a dramatic increase (at a CAGR of 34.4%) in the IoT security market from USD 6.62 billion in 2017 to USD 29.02 billion by 2022. After the world’s biggest Dyn cyberattack (involving multiple DDoS attacks) in 2016, even large-scale companies like Amazon, Twitter, Spotify, and PayPal realized the urgent necessity of implementing the most efficient IoT security practices. Moreover, by 2020, the amount of IoT-related security breaches may reach 25% thus increasing the demand for IoT security solutions.

With this in mind, we’ve prepared a list of top 5 tech innovations that provide the highest levels of security for the IoT sector. 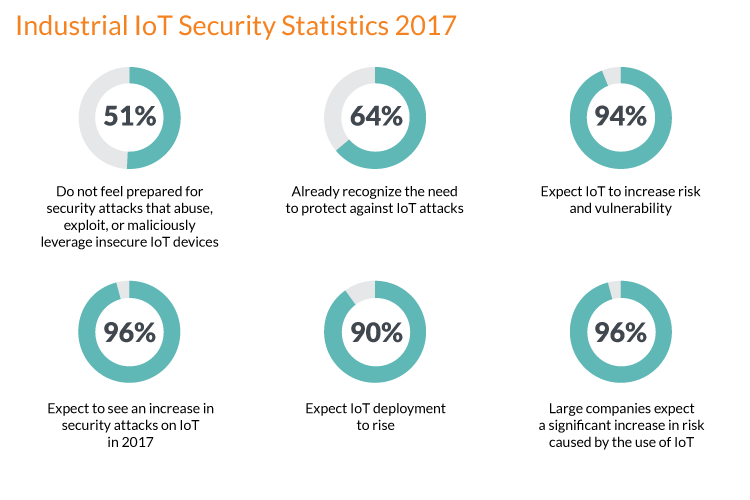 Blockchain technology is poised to bring new opportunities for enhancing security, privacy, and manageability of IoT devices. It has the power to create a private environment for IoT networks with effective contracts between parties without the need for any party to be trusted above another.

For instance, Australian telecommunication leader Telstra leverages blockchain technology to secure smart home IoT ecosystems. The company minimizes verification time and obtains real-time tamper resistance by storing cryptographic hashes of device firmware on a private blockchain. As the majority of smart home devices are controlled via mobile apps, the company expanded the model and added user biometric information to the blockchain hashes. This enabled blockchain to verify both the identity of IoT devices and people who use them. In addition, it prevents compromised mobile devices from taking over the network.

For instance, a US-based content delivery network company Cloudflare has created a solution Orbit which solves IoT security problems at the network level. It creates a secure and authenticated connection between an IoT device and its origin server. Moreover, Orbit allows device manufacturers to block vulnerabilities across all devices on the network simultaneously. This helps IoT manufacturers to carefully QA their updates and keeps devices from malicious requests, data leakage, or DDoS attacks.

IoT security analytics has a massive potential for reducing network load and storage requirements and providing actionable reporting on speciﬁc activities. It relies on machine learning algorithms, AI, and big data techniques to accommodate more accurate predictive modeling and anomaly detection. This advanced analytics has a strong potential for various IoT-speciﬁc attacks and intrusions that may not be as easily identiﬁed by traditional network security solutions. It can be used within the device to provide meaningful local feedback, thus making the devices more intelligent and secure.

For instance, it can detect whether there the device has exceeded its baseline of data or has an unacceptable impact on network performance and other services. Whereas machine learning helps in identifying anomalous behaviors by using threat intelligence information across network, device, and cloud layers.

With the help of this technology, the users are able to authenticate an IoT device and manage multiple users of a single device as applied to connected cars and smart homes. Their applications range from simple static password to more complex authentication mechanisms like two-factor authentication, digital certificates, and biometrics. For instance, a US-based home automation company Nest now adds two-factor authentication to its smart home products to prevent third-parties or hackers getting remote access to cameras or smart products.
Additionally, the US company Biomio offers the users an innovative password-free authentication system for Smart House ecosystems. It allows them to log into websites and accounts, encrypt/decrypt emails, be authorized in services, and even be authorized by gadgets without any passwords. U
nique face recognition algorithm enables the user to authorize by simply looking at the smartphone or using fingerprint recognition.

Public Key Infrastructure (PKI) enables Internet users to securely and privately exchange data across the network. Gartner mentioned PKI as a leading choice for information and communication security due to its flexibility and a wide range of applications. This technology is positioned to deliver the essential authentication and encryption components needed for IoT data security.

PKI facilitates the verification, application configuration and the interaction with data stored in the device. This enables the complete coverage of data and system confidentiality, integrity, and provides availability of data acquired from sensors or other intelligence systems. A complex PKI solution usually includes the hardware, software, policies, and procedures needed to create, manage, and revoke digital certificates. In addition, it manages the encryption process used to secure information in communication between systems and devices.

On the whole, the Internet of Things remains one of the most revolutionary forces in today’s high-tech society. Along with its impressive growth rates and numerous deployments across different industries, IoT security remains the primary issue. Such technological breakthroughs as blockchain, PKI, IoT analytics, IoT authentication, and IoT network security are making huge changes in terms of data privacy, seamless connectivity and manageability of IoT devices. This results in the emergence of innovative IoT security solutions which help global leaders embrace the digital trend without any risks.

Our experts have vast experience in developing scalable and secure solutions for interconnected devices and ensure the highest level of data privacy and network reliability. Also, we are recognized as a top Internet of Things Company on DesignRush. Contact our experts to learn more about our IoT and embedded development services.

23 July 2018
How to implement Digital Transformation and can it be outsourced?
In the era of Uberisation, with products, services, and businesses getting dynamically transformed, company leaders need to constantly maintain a competitive edge. Many modern businesses implement dig...

18 January 2023
Define the future of your business with expertise-driven IoT consulting
The Internet of Things is a relatively new technology, but it has proven to be a strong enabler of automation in numerous industries. Businesses across such domains as manufacturing, logistics and sup...