What is at stake for the European tech industry in the light of war in Ukraine?

The global IT outsourcing market and the tech industry in Europe are facing another tough challenge. On February 24th, Russia in close alignment with Belarus invaded Ukraine, a key outsourcing destination for many companies from North America, the UK, and Europe. Thus Ukraine has faced a massive talent migration from its Eastern regions severely impacted by war to the so far safe Western areas, while Belarus and Russia have been put under strict sanctions that force foreign companies to leave both countries for good.

Many companies are now trying to assess the impact of the Russian war in Ukraine on the global tech outsourcing market. The region is well known for its vast tech talent pool that has been attracting customers for years. Yet, the number of IT specialists engaged in the export of IT services in the region is not always obvious as data varies depending on the source and approach to the calculation. Oftentimes, the official data provides the number of ICT specialists which is far from those providing IT services to foreign customers. So what is the size of the Eastern European outsourcing market and what possible implications will the Russian war have on the tech ecosystem?

For the purpose of this article, we consider Eastern Europe as a group of the following countries: Ukraine, Belarus, Russia, Moldova, Georgia, Armenia.

Ukraine is a valuable hub for IT talents. It is home to over 250,000 IT professionals, based on the Unified State Register of people involved officially in IT services. 2021 was marked by a record increase of 24% in the country's tech workforce, adding 50,000 IT developers. Based on the survey of DOU, a leading industry platform, nearly 141,000 Ukrainian IT specialists work in IT services companies, while others are employed by product companies, local startups, and foreign R&D centers. Unlike Russia where the majority of IT talents work for the internal market, only 2% of Ukrainian IT professionals provide services to domestic customers. Thus, we assume that some 140,000 Ukrainian tech talents export their services abroad.

Talking about the IT industry in Ukraine, more than half of the Ukrainian IT talent pool was concentrated in Kyiv and Eastern Ukraine. Immediately after Russia declared military invasion on February 24th, Ukrainian tech firms started the execution of their BCPs, evacuating staff to the safer Western part of Ukraine. Some IT companies actively supported the relocation of their employees abroad before the invasion, but most did not push this option, thus the majority of the IT talent pool remains in Ukraine (the government temporarily banned men aged 18 to 60 from leaving the country).

Once Belarus was called a “Silicon Valley'' of Eastern Europe with more than 1,000 start-ups and IT service companies. Its tech sector was the one bright spot in a sclerotic economy that has changed little from Soviet times. The tech industry has been widely supported by the government that organized a high-tech park to host large IT companies as well as start-ups offering them a privileged tax rate. Yet, this changed dramatically in August 2020. After the presidential elections had been rigged and the country had been torn by protests suppressed by authorities, dozens of top Belarusian IT firms and thousands of IT specialists fled the country. Although exact statistics are unavailable, the estimations are that from 10,000 to 20,000 tech talents escaped the country to neighboring Poland, Ukraine, and Lithuania. So did the founders and top management of many IT businesses. The Belarusian tech industry was punished with a tax rate increase from 9% to 13%.

Despite the political situation, Belarus remained an attractive location for software outsourcing within the tech industry in Europe. The official number of IT specialists is unavailable. The report by Emerging Europe claims there are 155,000 ICT professionals. Yet, this number includes people working in telecom and other related industries. According to various estimations, Belarus has from 60,000 to 100,000 IT specialists involved directly in the export of IT services. The Washington Post claims the high-tech park grew to more than 1,000 companies with 71,000 employees. The founder of dev.by, the largest IT research platform in Belarus, in a recent interview also mentioned there are 60,000-70,000 software developers in Belarus. It is possible that a small portion of these people worked for Russian projects but we estimate this share to be insignificant.

The direct involvement of Belarus in the war in Ukraine will definitely have an impact on the local IT sector and IT industry in Europe. Along with its ally Russia, Belarus is facing severe sanctions, pushing developers to move abroad as long as the borders are still open.

Russia has a large internal market that has been gradually distancing itself from the world economy after the annexation of  the Crimea in 2014. Many Russian software engineers serve huge governmental and military sectors of the Russian economy, as well as the internal market (i.e. Yandex, Tinkoff). Cybersecurity and data security risks are another widely discussed issue of working with Russian companies, in particular in the light of cyber attacks launched by Russian hackers in Ukraine and Western countries. Still, for some reason, Western companies still outsourced their projects to Russia. With the largest IT players dropping their business in Russia, outsourcing to the country will come to its end.

The data on the number of IT specialists in Russia is quite vague, varying between 190,000 to roughly a million. Most likely such an impressive number does not have any real ground and includes a great share of the specialists very slightly related to the tech industry. RUSSOFT, the largest association of tech companies in Russia, in a recent survey, claims there were at least 640,000 employees in Russia who were directly involved in software development at the end of 2020. While impressive at first glance, the number to a great extent includes IT specialists engaged in sectors of the economy other than software outsourcing, namely government and public domains. Only around 190,000 work directly for tech companies, and nearly 25% of them provide IT outsourcing services for foreign customers. Thus, only about 45,000 Russian IT specialists work for export.

Tech industry in Georgia and Armenia

Benefiting from the legacy of strong engineering education, Georgia, and Armenia have been growing hubs for tech outsourcing, although the countries are relatively small and so are their IT industries. Combined, two countries have around 20,000 IT specialists involved in the tech outsourcing industry. Over the last month, Georgia and Armenia saw an influx of IT talents from Russia and Belarus as the world imposed severe sanctions on the two countries. Both Georgia and Armenia offer visa-free travel for Belarusians and Russian citizens, thus making them attractive places to relocate and continue working with foreign customers. As of now, almost 70,000 IT specialists have already left Russia, with up to 100,000 expected to leave soon as they can no longer deliver services to Western customers. Many of them left for Georgia and Armenia. More will leave, at least as long as Russia and Belarus keep the borders open. 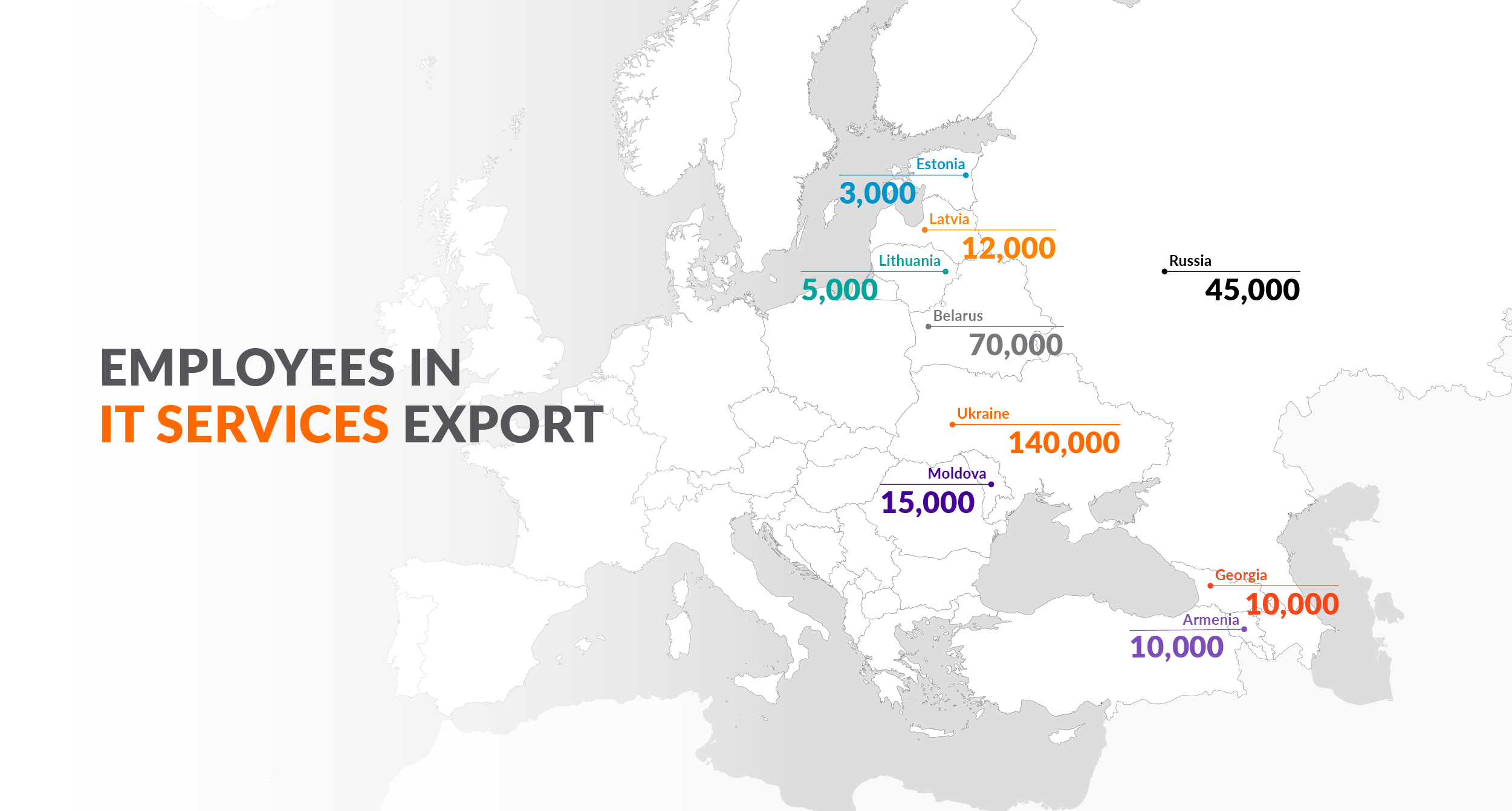 To sum up, the tech industry in Europe and the global IT outsourcing market have already felt the impact of the Russian war against Ukraine and it continues to grow. In recent years, Ukraine has become a key IT outsourcing market helping businesses across the world cope with the tech talent shortage and implement their digital acceleration strategies. The reputation of Ukraine as the leading democracy in Europe is growing, the country’s tech industry keeps working, and businesses keep coming to Ukrainian IT service providers with their projects - both to find tech expertise and support Ukraine in its fight for peace and freedom. 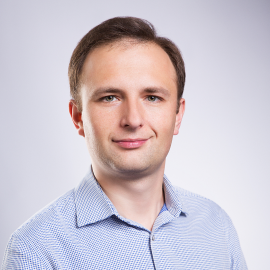 14 November 2022
Top SaaS developers for your project: how to find them
According to McKinsey [1], modern businesses expect to get 50% of their revenue from new businesses and products by 2026. To make it happen, many companies choose to implement SaaS products. SaaS solu...