There are many myths about Ukraine we would like to dispel in this article. People who haven’t worked with the Ukrainian IT companies usually see it as a poor post-soviet country with the undeveloped economy and legislation. Yes, it is true that the country still has a long way to go to join the rows of the prospering European economies but it has made significant improvements in its legislation in recent years.

International investors and business partners are increasingly venturing into Ukraine. The volume of entrepreneurial activity in the Ukrainian IT sector is steadily growing. However, clients are wondering whether Ukraine is safe for software development outsourcing. Questions like “Does Ukraine provide supportive legal background for the development of IT industry?”, “Are my data and intellectual property safe when I partner with Ukrainian software development companies?”, “How did the Association Agreement with the European Union influence the IT sector?”, and others frequently pop up when it comes to forging a partnership with a service provider.

Today’s article gives a brief roundup of the latest business climate improvements in Ukraine. It dwells on the recent changes in the Ukrainian legislation regarding taxes, labor laws, and data protection. Also, we will reveal the list of reforms and regulations that aim to improve the ease of doing IT business in Ukraine. 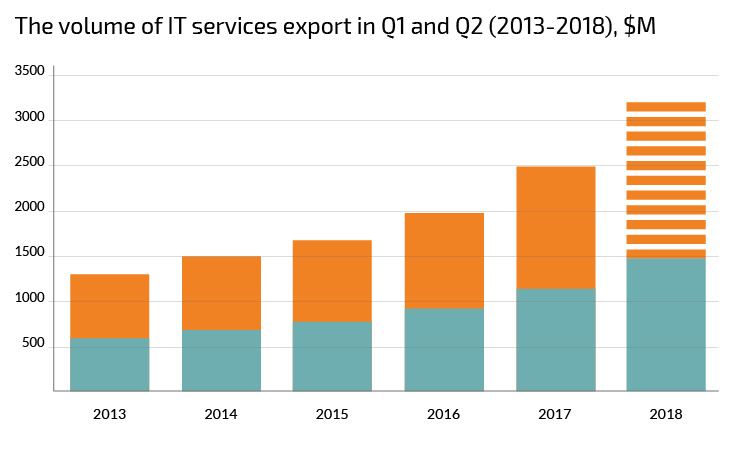 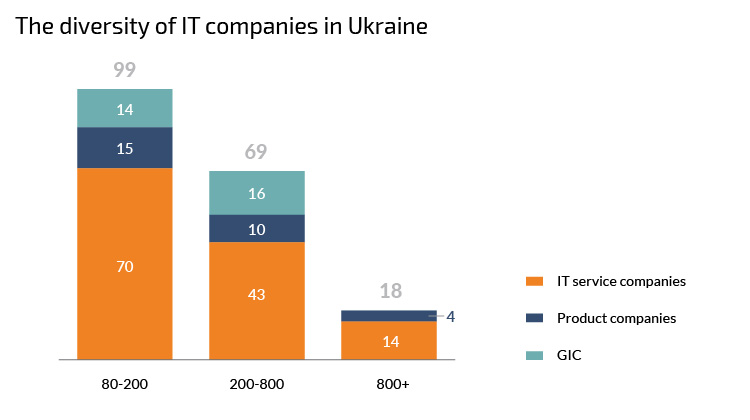 Changes in the Ukrainian legislation that facilitate IT outsourcing to Ukraine

Regardless of its type and business focus, every IT company requires a healthy legal framework for maintaining effective partnerships with clients overseas. Clients, on the other hand, want to make sure that there will be no legal obstacles when they choose to partner with a service provider in Ukraine. Thus, one of the drivers of the IT industry besides human capital and technology is the legislative field that facilitates cross-border business operations.

Ukraine has come a long way to ensure auspicious conditions for doing business. Since the country has signed the Association Agreement with the European Union, it has initiated a number of reforms in the political, economic and legal systems to meet the EU standards. The process of reforming the country has started and continues today.

As for the 2017-2018 reforms that impact the IT sector, the key improvements have been introduced in the areas of taxation, data protection, employment, and services export. 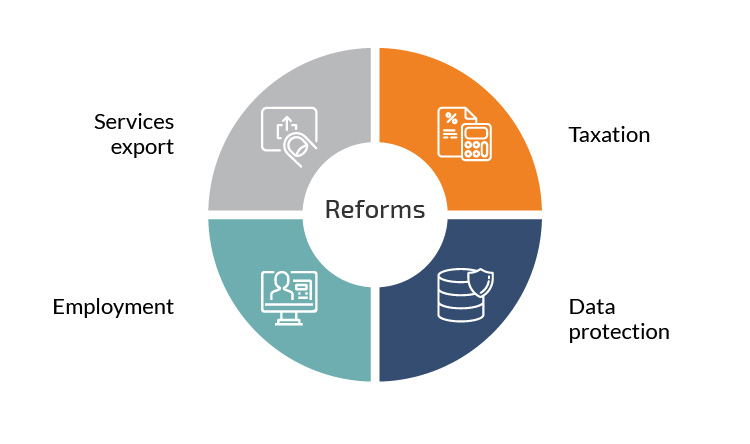 In recent years, the Ukrainian government has taken proactive steps towards simplification of services export from Ukraine. With the adoption of the Law of Ukraine On Amendments to Certain Laws of Ukraine on Elimination of Administrative Barriers to Export of Services, it has become easier to maintain business operations with clients abroad.

First of all, parties can now conclude foreign economic contracts in the form of electronic documents, provided they are certified by electronic signatures in accordance with Ukrainian legislation.

Additionally, the procedure for executing contracts for export of services has been simplified. It allows concluding export contracts by accepting a public offer, exchanging emails and invoicing for services rendered. Export contract invoices are now considered primary accounting documents.

Moreover, the export of services (except for transport and insurance services) and intellectual property rights are no longer subject to the 180-day currency control rule. Ukrainian exporters are currently not required to settle payments under export operations within the established term of 180 calendar days from the date when the services were rendered.

The taxation system in Ukraine has very favorable conditions for IT companies. A significant number of IT specialists in Ukraine work with companies under the private entrepreneurship model. It consists of three groups but the most flexible and frequently used is the third one. Entrepreneurs pay a single income tax of 3% if they are VAT payers and at 5% if not. In addition, they are subject to a social security tax of 22% of a minimum wage. Such a model is very advantageous because it significantly reduces the tax burden on companies.

As the Ministry of Economic Development and Trade of Ukraine claims, most of the taxes raised from Ukraine’s IT sector come from people registered as private entrepreneurs. The number of its revenues grew by an average of 58.8% during 2013-2017 and reached 3.2 bn UAH in 2017.

By contrast, the amount of taxes paid by IT companies during 2014-2017 was steadily growing by 27% each year and in 2017 it reached 4.1 bn UAH, according to the survey conducted by IT Ukraine and BRDO. This tendency continued in the following year. And in the first half of 2018, revenues from taxes grew by 30.1% in comparison to the corresponding period of 2017.

On September 22, 2018, a draft to the Law On Amendments to the Tax Code of Ukraine concerning the Abolition of the Electronic Administration System of Value Added Tax was registered. According to this draft, the Ukrainian IT sector should be subject to the increase in taxes.

According to the amendments to the Tax Code of Ukraine (TCU), on January 1, 2018, new VAT exemption regulations related to software supplies became effective. Based on these regulations, during the period from 1 January 2013 to 1 January 2023, VAT exemption is applied to software supply transactions included in the extended list that is effective starting 1 January 2018 and software related transactions with payment that is not considered royalty as specified in paragraphs 2-7, subparagraph 14.1.225 of the TCU.

Another bill On amendments to the Tax Code of Ukraine regarding the Exit Capital Tax was registered On July 5, 2018. According to it, the exit capital tax will replace the corporate profit tax starting from 1 January, 2019. It will facilitate running a business in Ukraine and reduce the cost of fulfilling the tax duty.

The exit capital tax rates will be as follows:

Moving from the corporate profit tax to the exit capital tax will provide tangible benefits both for local IT companies and their clients. The former will be able to attract more investments and their tax reporting will become more transparent and the latter will enjoy administrative simplification and a significant decrease in the tax burden.

The main legislative act regulating data protection in Ukraine is The Law of Ukraine On Personal Data Protection, which was passed on 1 June, 2010. Also, Ukraine is a party to the Convention for the Protection of Individuals with regard to Automatic Processing of Personal Data dated 1981 and the 2001 Additional Protocol. Other legal documents that ensure data protection in Ukraine are:

With the adoption of GDPR, Ukraine has introduced a number of changes into its legislation on the protection of personal data to bring it into compliance with the EU standards. Now, the Data Protection Law fully corresponds to the EU Data Protection Directive. On February 25, 2017, the Ukrainian president Petro Poroshenko approved the Information Security Doctrine which is aimed at protecting against cyber attacks during the free and globalized circulation of information.

Additionally, on November 7, 2017, Petro Poroshenko signed the Law On Basic Principles of Ukraine’s Cyber Security. The law determines the legal and organizational foundation for ensuring the protection of the vital interests of citizens and the national interests of Ukraine in the cyberspace.

It is also worth mentioning that Ukrainian programmers are ranked first in the world in terms of security according to HackerRank.

IT companies, most of which work in Ukraine either under the fixed priced, T&M or dedicated team models, can hire people either under labour agreement (as a salaried employee) or under civil services agreements (as a freelancer). In fact, the majority of them decide to work with freelancers who are registered on the simplified tax model. The reason behind is simple: if hired as a salaried employee, the company should pay a tax of roughly 40% in contrast to 5% provided by the freelancing agreement. The main laws that regulate the employment of salaried employees and freelancers are the Labour Law of Ukraine and the Civil Law of Ukraine correspondingly.

The IT labour market in Ukraine is characterized by a healthy bilateral migration of employees. It means that those who settle for jobs abroad are replaced by relatively the same number of foreign IT specialists. Although the percentage of IT employees who decide to migrate overseas has significantly decreased in the recent years, the influx of foreigners to Ukraine remains stable. 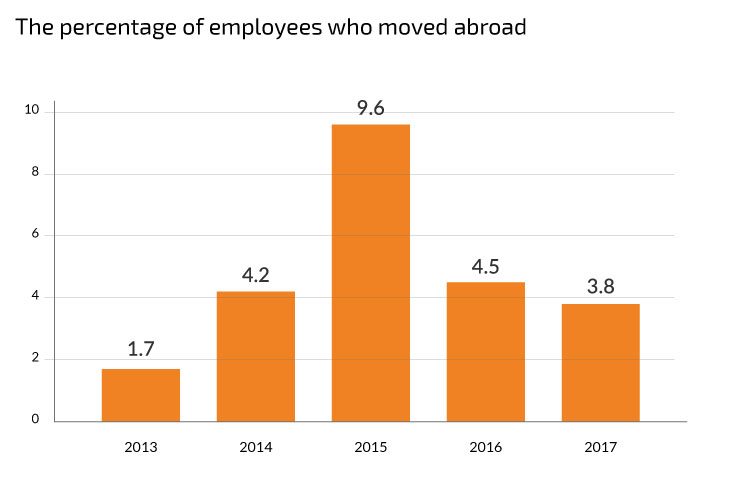 The Ukrainian legislation includes several laws that stimulate the flow of foreign IT specialists to Ukraine. According to the Law of Ukraine On Employment of the Population, foreigners have the following rights:

Additionally, according to the Letter of the Ministry of Justice of Ukraine dated January 23, 2018, a foreigner without a residence permit can be now registered as a private entrepreneur. Previously, it was impossible for foreign IT specialists to work with tech companies in Ukraine under the private entrepreneurship model unless they have the official residence permit.

Another issue that was resolved in 2018 is the entry and exit of foreigners from the CIS countries who are employed in Ukraine. The Cabinet of Ministers of Ukraine adopted a Resolution which states that foreigners have rights to apply for obtaining the residence permit no later than 30 days from the date of the last entry to Ukraine without leaving Ukraine.

Currently, Ukraine doesn’t have a sector-specific regulation for the IT industry. IT companies in Ukraine operate under the general legislative field of Ukraine. The IT sector is one of the main sources of foreign exchange earnings that fuels the economic engine. Thus, the Ukrainian government actively supports the industry through reforms and laws on taxation, data protection, employment, and services export.

Granted, there are a lot of issues that need to be improved. Yet, the most important steps have been already taken with signing A European Union Association Agreement. Now, Ukraine is gearing up for economic growth and reforms in the education system to ensure stable growth of its IT industry.

06 June 2019
Software development outsourcing: how to avoid contract loopholes
Signing a contract is the last stage in the vendor selection process. Once you have gone through the vendor evaluation and analysis activities, here comes the final step - forging a contract. To strik...