Many companies that are looking for a software development outsourcing company in Ukraine wonder if the destination is safe in terms of politics, economy, business climate, and information security.

And it is only logical as choosing the wrong outsourcing provider may be periculous to the overall business process. So, we’ve completed the guide that covers all these aspects and will hopefully help you make well-weighed conclusions.

In Part One we focused on how data protection and information security are enforced in the country. Also, we considered how Ukrainian IT outsourcing vendors handle various aspects of security.

In Part Two we are focusing on the business climate in Ukraine, reforms, and investments to determine whether it is safe to outsource to this Eastern European country.

Part Two is based on research findings by A.T. Kearney, PwC, Bloomberg, Deloitte, and more.

Companies that are looking for an IT outsourcing vendor in Ukraine may have concerns regarding its safety as there is an ongoing conflict in the eastern part of Ukraine. However, it’s not the way it seems to be at first glance. Let’s take a closer look at the situation.

First. The conflict is taking place in the remote, secluded area in the east of Ukraine, and it has no impact whatsoever on other regions.

Ukraine is the continent’s second largest country at 603,628 square kilometres, and the distance between some cities is substantial. For instance, major IT hubs in Ukraine, Kyiv and Lviv, are closer to Prague, Krakow or Berlin than to the conflict zones. That’s why the conflict hasn’t changed the life and business flow in other regions. 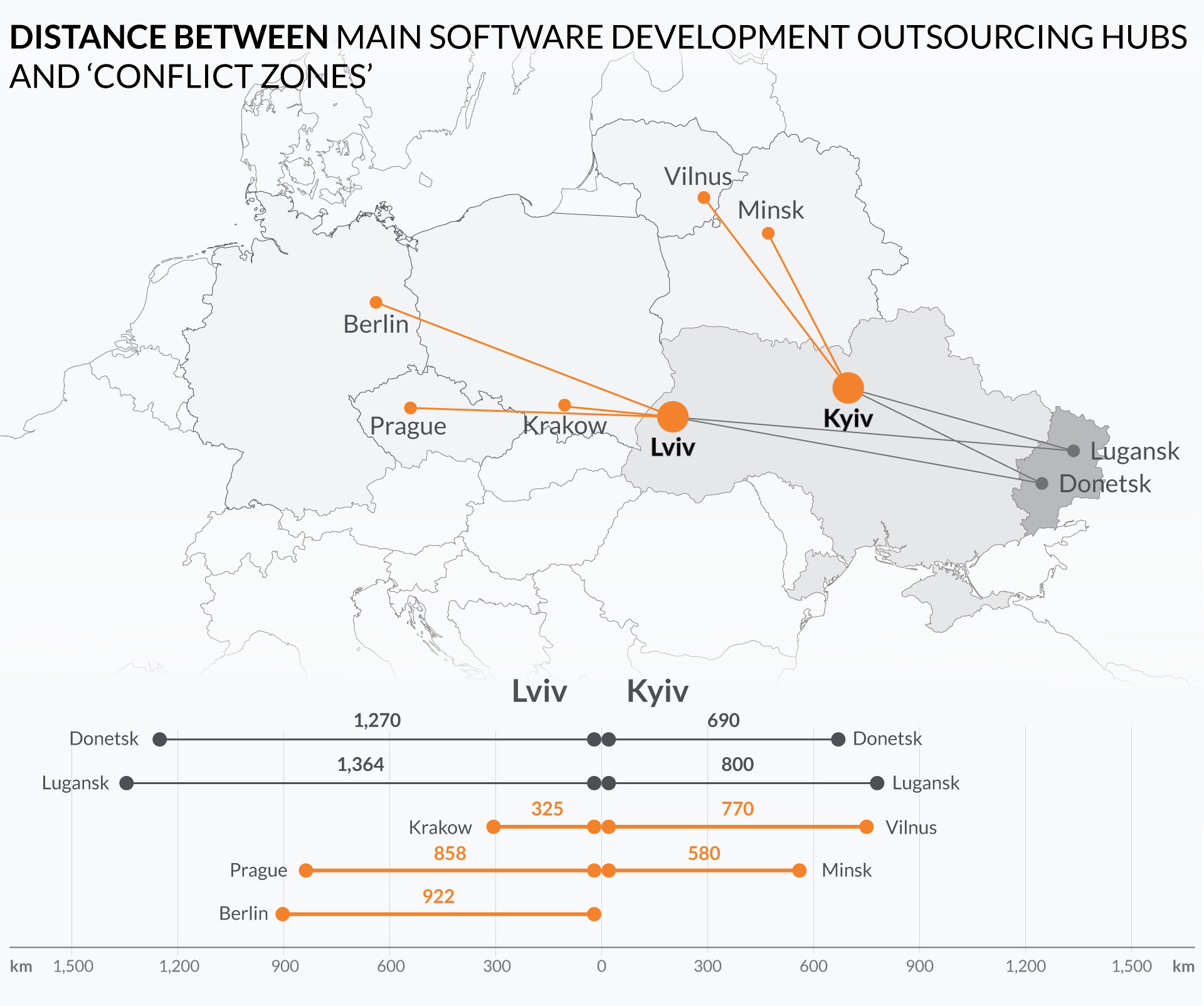 Second. To settle the conflict and keep it under control, Ukraine is cooperating with the US and Canadian army, US Congress, UN, etc.

For instance, Canada has been a strong supporter of Ukraine in its fight against the oppressor. It also provides direct support to the Ukrainian government and army in a number of different ways. More than 200 Canadian Armed Forces (CAF) personnel are deployed in Ukraine. Also, Canada has given more than $700 million in financial, humanitarian and military assistance, including military equipment, to Ukraine since the start of the hostilities in 2014. And it is going to provide more in the coming years.

The House of Representatives of the US Congress supported the allocation of $ 250 million to help Ukraine enforce security in 2019.

Third. There are other examples of countries with conflict zones that have sustainable economy and favourable business climate.

Ukraine’s challenges are similar to those countries such as Morocco (Western Sahara issue), Pakistan (Kashmir), Israel, and other countries face. And they remain alluring despite conflict or political instability.

As part of its anti-corruption endeavour the country has implemented:

New anti-corruption institutions. These include the newly established:

To make the anti-corruption measures more effective, the government leverages tech innovations, such as blockchain. For instance, the Ministry of Finance of Ukraine implemented Distributed Labs’ eAuction, a blockchain platform for transparent auction management.

On 30 December, 2017, the Ukrainian government passed The Law of Ukraine “On amendments to the Tax Code of Ukraine aimed at balancing 2018 budget receipts” (the “Law”) which substantially improved the taxation system of Ukraine.

The transformation went on with 3 more crucial reforms implemented in 2017 – in education, pensions and health care. In early 2018, Ukraine’s Parliament passed a law to accelerate and facilitate privatization.

Sustainable growth is the best indicator of favourable business climate

Despite the conflict and post-soviet legacy, Ukraine is showing signs of stabilization and prosperity, and it is hitting its target for 3.5% GDP growth in 2018. Inflation is going down and is estimated to normalize under 6% by 2019. A large share of the profit growth can be tributed to the development of the IT industry. It is one of the most rapidly developing sectors in Ukraine. According to PwC, the IT sector in Ukraine has grown by 15-20% over the last 2 years (from $2.5 billion to $3 billion). According to Bloomberg Innovation Index, the country is rated 46th for its adoption of innovations. Moreover, Ukraine has gone up 23 positions up over the last 3 years in the World Bank’s Ease of Doing Business 2017. The country also ranks among the world leaders in terms of outsourcing, according to the Global Services Location Index by A.T. Kearney, and is rated 24th. Moreover, 13 Ukrainian outsourcing companies made it into the 2017 Global Outsourcing 100.

Ukraine is perfect for doing business as it is easily accessible to key global business hubs. For instance, it takes just 3 hours to get to London from Kyiv by air, and – 2 hours from Kyiv to Berlin. There are 19 passenger airports, and every year airway companies open new flights from Ukraine.

An important step in making Ukraine closer to EU was approving visa-free travel for Ukrainians. That facilitated business traveling for Ukrainians and eliminated another barrier between Ukrainian and European business worlds. The EU’s approval came in 2017 and followed the reforms in areas such as migration, public order and security, external relations and fundamental rights.

In May 2018 Kyiv hosted the 2018 UEFA Champions League Final and served to the diverse needs of thousands of international guests.

Ukraine is an alluring place for investment

Since 2014 the state has focused greatly on improving the business climate in Ukraine, and it has taken many measures in that direction. The Government has approved its Strategic Action Plan 2020, which entails:

To help investors, create more favourable investment conditions, and address the issues that may arise, the government set up the following institutions:

As a result of the combined effort, Ukraine has become an investment hot spot.

Total market capitalization stands at $6.5bn. There are also some big companies on the market, which is of vital importance for big investors. For instance, 40+ companies are valued at $50m or beyond. The market is fairly liquid, too. The average daily trade volume stands at $265m.

The total amount of investments in Ukrainian IT companies over the past 5 years amounted to $ 630 million, including with the participation of top world investors, which indicates the level of development and sustainability of the domestic industry despite the country’s economic and political problems,

Also, Ukraine is home to 100+ R&D offices of market-leading companies across a wide range of industries, from telecoms, gaming, healthcare, fintech, to retail, and e-commerce. Such global leaders as Boeing, Aricent, Huawei, Siemens, Oracle, Magento, Apple, Microsoft, Deutsche Bank, Skype, eBay, IBM have R&D offices in Ukraine. The USA has the largest share of R&D partnerships in Ukraine. It equals about 45% of companies. Kyiv is the key location for setting up R&D offices. Other cities that are a perfect fit for setting up an R&D office include Lviv, Dnipro (Dnipropetrovsk), Odesa, Kharkiv, and Vinnytsia. In 2018, a few companies, including PwC, opened up new offices in Ukraine.

Many companies that are looking to outsource to Ukraine may have doubts whether it is a safe and reliable destination, and if the state and IT vendors pay enough consideration to the clients’ rights, information assets, and business processes. That’s why we’ve completed the guide to shed some light on it and backed up our conclusions with research-based facts. In Part Two of our guide, we dwelled on business climate, reforms, investments, and IT industry in Ukraine. As we can see, despite some instability, Ukraine is showing strong signs of economic and political stabilization. Since 2014 the state has implemented a wide range of important reforms and improvements in different directions, from legislature to tourism. As a result, it has proven an alluring and reliable destination for investment, R&D, software development outsourcing, and tourism.