Ukraine is one of the leading software development outsourcing destinations in Eastern Europe. The country’s IT market is growing rapidly generating more and more skilled engineers as well as successfully delivered software projects for renown global companies. That is why we have outlined several facts about IT outsourcing in Ukraine as one of the key players on the Eastern European IT market.

19. Eighteen Ukrainian companies are rated in The 2018 Global Outsourcing 100 by IAOP. In 2017, this list included 13 companies from Ukraine.

20. Currently, about 1,000 Ukrainian companies and almost 160,000 programmers provide services to the clients around the globe.

21. According to the PwC report, Ukraine is ranked among the top 25 IT services exporters worldwide.

22. Ukrainian IT industry export volume has grown from $2.7 bn in 2015 to $3.6 in 2017, taking the third place among export volumes in the country (after metallurgy and food industry). 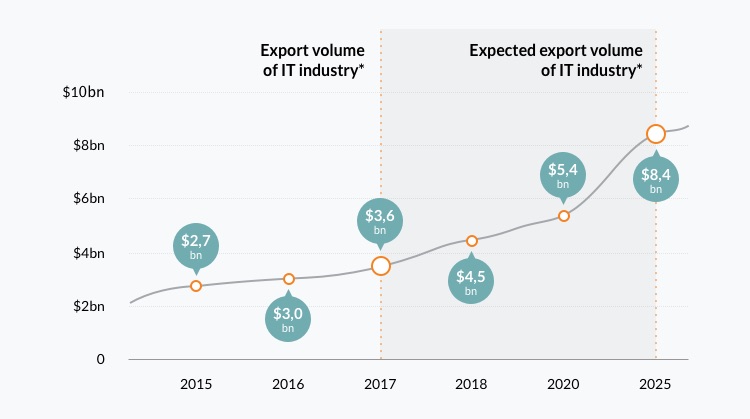 24. More than 70% of IT services in Ukraine are exported.

25. In October 2017, Ukraine was named Offshoring Destination of the Year at the GSA UK Awards 2017.

26. According to The Global Human Capital Index 2017, Ukraine has the 24th position out of 130 countries. The Ukrainian human capital serves as a foundation for IT economy development in the country.

27. According to DOU.ua survey, the Ukrainian IT market has a high rate of highly qualified software engineers comprising 36% of middle software developers, 26% of junior programmers, and 19% of senior engineers.

28. The number of IT vacancies in Ukraine published on DOU.ua, a popular Ukrainian website about IT industry, increased by 45% in 2017 compared to 2016.

29. There are more than 38,000 graduates with technical degrees annually in Ukraine.

The data from different rankings such as AT Kearney’s Global Services Location Index, Tholons Services Globalization Index, Bloomberg Innovation Index and others demonstrates the impressive growth of Eastern European IT industry during the recent years. Many global companies, such as Lebara, Xerox, Philips, Gogo, and others benefit from outsourced software engineering and partner with IT vendors in Eastern Europe.