The increasing complexity of IoT environments calls for more advanced tools and techniques for IoT test automation. The demand for more sophisticated and effective software QA and testing tools and models will grow further in an increasingly connected world. At the same time, IoT automation testing ...

The increasing complexity of IoT environments calls for more advanced tools and techniques for IoT test automation. The demand for more sophisticated and effective software QA and testing tools and models will grow further in an increasingly connected world. At the same time, IoT automation testing cannot be an afterthought if you want to launch a perfect product, and there are three reasons why testing matters:

The challenges of IoT QA Testing for the business

Developing any kind of product is associated with certain challenges, be it custom software development or building hardware for IoT and embedded systems. You need to understand the scope of the endeavor and all the possible bumps on the road. When it comes to IoT QA testing, there are three major challenges that you will need to overcome.

The first and the most challenging aspect of IoT testing is the sheer complexity of the system. A large IoT infrastructure contains hundreds of devices and connectivity protocols, all of which send and transmit uncountable numbers of signals each day. With such complexity, there always is a chance of an error that could send the system off the rails for a number of reasons:

Read our earlier article to learn how to ensure IoT security across system layers.

Each IoT ecosystem is unique. Your enterprise IoT would be different from that of your competitors, and regardless of how complex or simple it is, it requires an IoT test automation framework. Engaging in IoT development, you will find out that there is no out-of-the-box framework that matches all of its unique features and requirements. That is where you will need an expert who can develop a test framework that is going to fit the unique requirements of your ecosystem.

The complexity of the system adds to the problem. Each layer of the system - device, gateway, cloud, data - also need to be tested both separately and in relation to one another

Hard to automate and integrate into CI/CD

Another challenge of IoT QA is that it is hard to automate the testing process and integrate it into the CI/CD process. The problem here is that IoT automation testing must be an inherent part of the development process. Most companies, however, do not have the capacity to automate and integrate testing into CI/CD, which causes unnecessary overheads.

How to address the challenges of IoT test automation: The three-stage approach by N-iX

However, testing the entire IoT infrastructure is a much more complicated task. Testing hardware, devices, gateway, and communication protocols requires a structured approach and a strong knowledge of IoT test automation practices as there are no ready IoT QA testing frameworks for that type of testing. Why? Because your system is unique and requires a unique framework that would suit your unique system. 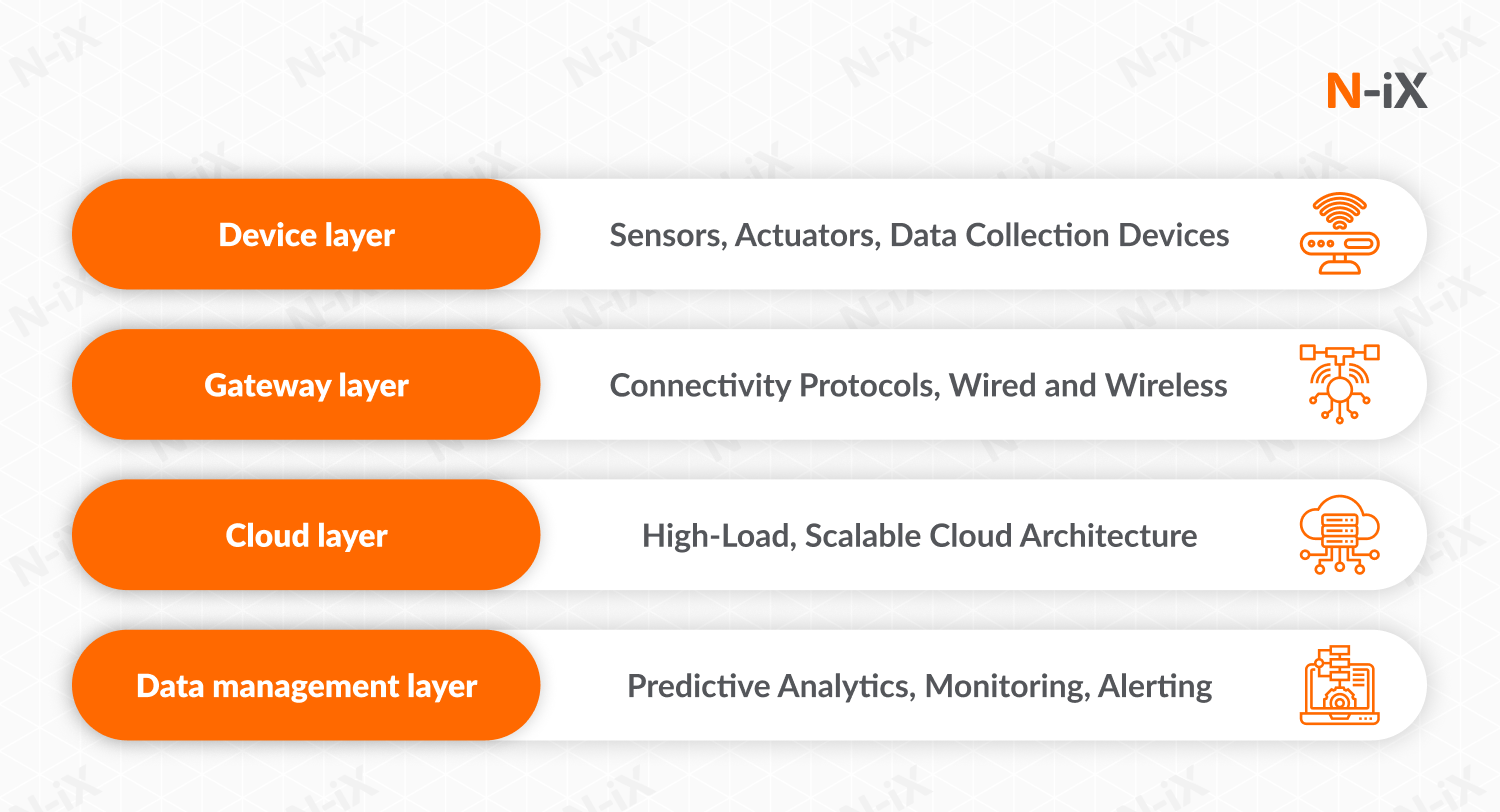 Testing each layer separately gives us one major advantage – that way we can quickly identify the source of the problem and locate the problem areas that need our attention.

Warning: Not testing system layers separately does not give you a precise understanding of the problems that might occur anywhere across the IoT infrastructure. As a result, you will have to test all of the system components manually trying to figure out what went wrong. This is a tedious, time-consuming, and costly process. Also, in case you make any changes to the system, you will need to test it over and over, which would once again take lots of time and resources.

Stage 2: Test the connection between layers

Proper functioning of the system layers alone does not guarantee the integrity of the entire system. You need to be sure of the proper transition of signals and data between system layers. N-iX experts can test the flow of data from the device through the gateway and into the cloud layer of the infrastructure.

We run two types of testing:

The goal here is to make sure the communication between the system layers is stable at all times. You do not need to worry about power outages or loss of connection that might disrupt the flow of data throughout your infrastructure. This will also help with data analytics if you want to gain additional insight from the information you collect.

After testing the performance of each separate layer as well as the connections between the layers, we are ready to test the performance of the system as a whole. This is the stage at which we aggregate the collected data from the previous tests and run the whole system in a real-life or emulated environment. Here, we round the IoT QA testing process up to fully automate and integrate it into the CI/CD practice.

There exists a wide range of devices of different shapes and forms, and different types of devices are marketed to a number of audiences. The success of the product often depends on the users’ perception shaped by the comfort of use. The user experience is a vital element of the product’s success in a highly competitive market, which is why it is essential to test the product for usability.

IoT ecosystems may connect a number of devices, often manufactured by different companies. Such devices would naturally have different software and hardware configurations, which may hinder their ability to function properly within a single network. Compatibility testing is meant to secure the proper interoperability within the IoT ecosystem giving you confidence in its flawless performance.

Reliability and Scalability are important parts of IoT automation testing in environments that can be expanded and improved upon as time goes by. As your enterprise grows and evolves, so does your IoT infrastructure, and you want to be sure of its reliability. Testing the reliability of your IoT infrastructure is the key to knowing it is going to function properly in the long run. It also gives you the confidence for further scaling of your enterprise.

IoT systems work with large amounts of data that can be compromised as a result of a malicious attack. The vulnerability of such systems and IoT security are major concerns for any business, and that is exactly why data integrity testing is so important. You will need a partner who can run penetration testing to make sure your data is safe and protect your infrastructure from all types of security threats.

You will need a partner who can test your entire IoT infrastructure, and N-iX can apply out-of-the-box test frameworks and develop custom test automation frameworks for you. Any ecosystem might be subjected to changes over time, and that is precisely why you need to be prepared for the scaling needs of your enterprise. We integrate IoT test automation into the CI/CD roadmap so that you can test the system whenever new sets of devices are added to it.

Being sure of your product’s quality is the most important aspect of a successful market launch. It gives you confidence in the smooth running of the development process allowing you to reduce overheads. It also speeds up development, as you can react to problems much faster and eliminate them easily. And last but not least, it gives your clients the perfect product they deserve, boosting your reputation and brand loyalty.

Testing such complex infrastructures requires profound IoT testing expertise and the use of custom IoT automation testing frameworks. N-iX can help you develop and test IoT and Embedded systems that promote the efficiency of your infrastructure and boost your business's overall performance.

Our client is one of the world’s largest companies that delivers IoT [...]

28 October 2022
List of 15 IoT service providers to consider for your next project
The Internet of Things is a powerful enabler of automation, and timely adoption of IoT can help you optimize manual labor, cut tedious and repetitive processes, and reduce pressure on your employees. ...

17 June 2022
How to solve the challenges of Embedded and IoT development lifecycle
Developing embedded systems with further integration into the Internet of Things ecosystem  requires knowledge, skills, and a fundamental understanding of the project needs. This is a multilayere...