Blockchain is indeed a revolutionary technology that allows making our transactions much faster and more secure. The decentralized ledger empowers businesses and users by offering them the level of control and transparency they&rsquo;ve never had before. According to PwC Expert, $1.4 billion was inv...

Blockchain is indeed a revolutionary technology that allows making our transactions much faster and more secure. The decentralized ledger empowers businesses and users by offering them the level of control and transparency they’ve never had before. According to PwC Expert, $1.4 billion was invested in blockchain in 2016 and this number is growing day by day. Thus the demand for blockchain development is growing but the global IT market is short of engineering resources to meet it. Many companies operating in the financial and other sectors understand the need to adopt this technology sooner than their competitors. However, oftentimes they stumble upon the problem of resources and the lack of necessary expertise. That is why they consider outsourcing this work to nearshore and offshore blockchain development companies.

One of the most attractive destinations for outsourcing IT services is Ukraine as the country boasts the largest programming talent pool in Eastern Europe. Ukrainian IT industry adopts new technologies and innovations really fast and blockchain is not an exception. Now blockchain is gradually gaining traction in Ukraine and influences both its software development industry and its public sector. Ukrainian developers consider mastering this technology since it offers great prospects and opens new ways of cooperation with global companies. So let’s discover what is happening on the blockchain development market in Ukraine and how Ukrainian developers are building expertise in this technology. 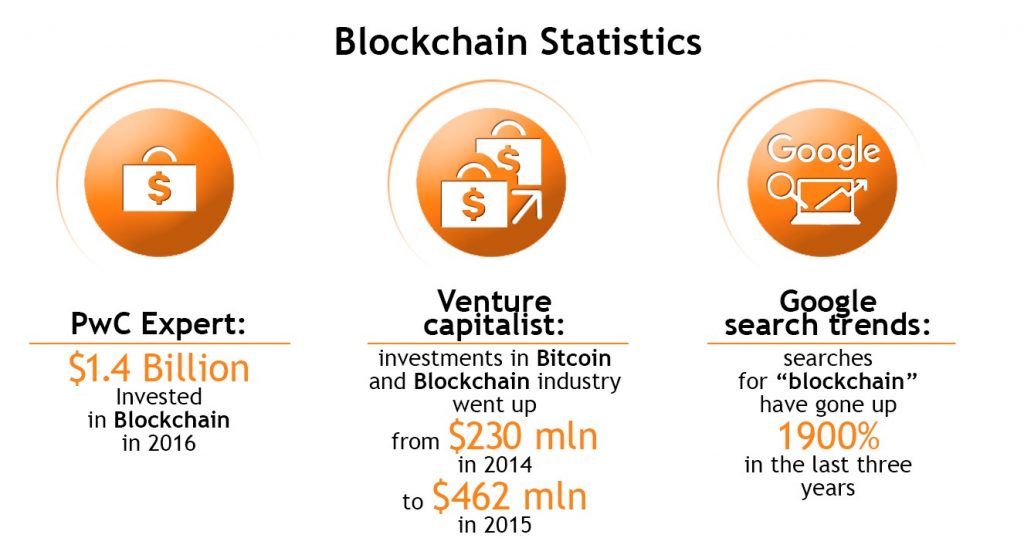 Despite the fact that blockchain is just getting off the ground, the number of Ukrainian startups and companies delivering blockchain projects is gradually increasing. Some of the Ukrainian IT companies have provided software development services for global fintech businesses which were the first to exploit this technology. So naturally, they followed the industry trend and started to develop blockchain expertise . As a result, some of them are already providing blockchain outsourcing services and are ready to face the challenges of this evolving market.

Blockchain is getting more popular in Ukraine, though it is at an early stage of development. Many Ukrainian developers consider mastering this technology and adding it to their stack as it offers a myriad of prospects. They are already attending various conferences and meetups, developing their expertise in fintech and bitcoin-based projects and even more. So let’s have a look at a number of Ukrainian companies who already have the expertise to provide blockchain solutions.

N-iX, a European IT company based in Ukraine, has been providing a wide range of software development services since 2002. N-iX developers have vast experience in delivering fintech projects as they’ve cooperated with such international brands as CurrencyCloud, Finatek, Baxter-FX, and Mobile Trading Partners.

To meet the evolving needs of the tech market , the company started to develop blockchain expertise. The provider offers blockchain development services to businesses in different industries and can put together an outsourced development team for delivering a blockchain project. Furthermore, the company has a well-deserved reputation as a reliable IT outsourcing provider for such established brands as Lebara, Open Text, Cure Forward, Anoto, and many others.

Some other IT companies have already made their contribution to the blockchain development in Ukraine. For instance, an IT outsourcing company Innovecs has opened a Blockchain R&D center in Kyiv in 2015. This center was set up with the help of Mikhail Chobanyan, co-founder of Bitcoin Foundation Ukraine. The same year, software development company EPAM established a Blockchain Competency Center with over 20 dedicated experts. Moreover, such companies as Ambisafe and Distributed Lab have teams of Ukrainian developers who create blockchain solutions.

Nowadays Ukrainian companies are exploring how to add value and leverage the opportunities offered by the blockchain technology. As a result, they combine finance, bitcoin and a variety of fields with blockchain to create innovative solutions which could simplify the business procedures and increase transactions security levels. Here is a short list of blockchain-based solutions created by Ukrainian developers.

This is an accounting platform developed for volunteers that simplifies the process of goods and service exchange. The system is blockchain-based and has an admin panel and a personal wallet available via the web and mobile apps. It provides benefactors with information about volunteer organizations’ needs. Moreover, it creates accounting statements available for volunteers and benefactors.

This solution is a uniform protocol for the financial web which serves as a communication regulator between banks and customers. The solution has no common ledger. Shared ledgers are created when needed only between parties that trade together. Furthermore, ledgers can be private, public or shared only between certain entities. Each group of shared ledgers has its own regulating mechanism and validators.

E-Vox – an open e-democracy platform – is an electronic voting system developed by a group of companies including Ambisafe, Distributed Lab, and Kitsoft. This platform enables voting transparency and fair decision making without third parties’ influence. With the help of blockchain technology, the system helps avoid falsification and system attacks as well as increase security. Moreover, it simplifies the voting process by using specific IDs to reduce the need to create specialized voting stations.

The fact that Ukraine is not lagging behind the world trends is confirmed by the existence of the blockchain and bitcoin communities. For instance, one of the active supporters of Ukrainian bitcoin community is KUNA Bitcoin Agency. It is the first Ukrainian cryptocurrency agency in Eastern Europe and the fourth in the world Bitcoin Embassy in Ukraine. Since December 2014, it has been selling bitcoin vouchers in digital or paper form in Ukraine. Moreover, it organizes bitcoin seminars, hosts Satoshi Square and promotes bitcoin with the help of Bitcoin Foundation Ukraine.

Apart from the development of the Bitcoin community in Ukraine, Blockchain is also gradually penetrating the market. The first Blockchain competence center has been recently opened in Kyiv thanks to the co-founder of Ukraine’s Bitcoin Foundation.

What’s more, a major blockchain event took place in September in Kyiv – Blockchain & Bitcoin Conference Kyiv 2016. Around a thousand guests attended this event where they gathered a big amount of information concerning blockchain and cryptocurrency topics. The conference gathered leading developers, entrepreneurs, and startup founders. The audience was divided into three sections: newcomers, experts, and developers. Newcomers found out about such topics as cryptocurrencies, bitcoin, altcoins, blockchain, and smart contracts. Experts learned about other countries’ legislative experience in regulating cryptocurrencies, future exchange trade, and mining. Developers worked on the code, mining station adjustment, and PoS algorithm analyses. Moreover, participants took part in a workshop on developing smart contracts based on Ethereum and even conducted a live security test. S uch conferences provide a perfect opportunity for networking with other people interested in this technology, allow the programmers to develop their skills and find out about the latest blockchain trends.

In addition, Ukrainian educational establishments are starting to add blockchain to their curriculums. Five technical universities located in Kharkiv have already partnered with Distributed Lab to set up blockchain courses. They expect that over 600 students from different Ukrainian cities will enroll for the courses. This is going to increase the awareness among the younger generation, promote the blockchain trend in Ukraine and eventually develop blockchain expertise in the country.

The Ukrainian government is actively supporting the growth of the IT industry and starting to adopt new technologies for extending the capabilities of the existing regulatory systems. During the Cashless Summit in Kyiv in November 2016, the NBU board presented the roadmap of Cashless Economy project. The National Bank of Ukraine approved it and announced official regulatory plans to use blockchain technologies in Ukraine.

Now, blockchain has the potential to help eliminate corruption in the country’s governmental sector. Moreover, in the nearest future, Ukrainian banks are going to connect to Ripple Internet-protocol to protect financial transactions data. The National Bank of Ukraine is starting to promote non-cash payments to reduce the demand for cash. Not only will this help develop payment infrastructure but also raise the need for developers to participate in blockchain related projects. Furthermore , blockchain advocates predict that the implementation of this technology will facilitate the development of an electronic government in Ukraine. All in all, the state initiatives are very important for the development of this technology on the Ukrainian IT market.

Even though the number of Ukrainian companies creating blockchain solutions is still not big, this technology is soon going to become one of the most demanded on the market. It is going to have a massive impact on the banking industry, as we briefly discussed in this post. Blockchain will probably affect many other industries as well. Ukrainian developers are already working on blockchain-based projects which may simplify the voting process or service exchange, increase security, regulate communication between parties etc. Blockchain development companies in Ukraine are launching educational initiatives to create regular classes and practical workshops in order to extend the pool of programmers specializing in this technology. Moreover, a number of courses and hackathons organized in Ukraine have already engaged a lot of engineers in this development field. So the blockchain expertise in Ukraine is growing and we’ll see more innovative blockchain projects developed in this country. 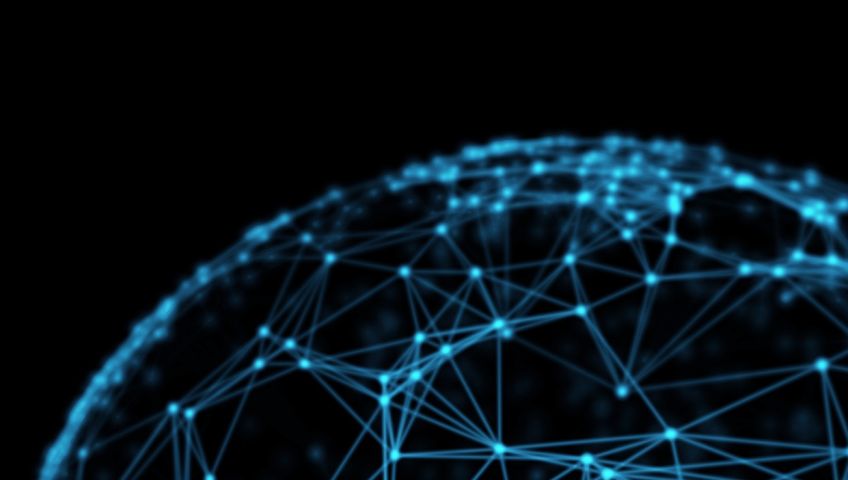