Where to find Java developers: UK vs Ukraine vs India

Today, Java remains the king of all programming languages in the technology job market despite the growing popularity of Python. This year, Java turns 23, yet the demand for Java developers is at an all-time high and shows no signs of losing its momentum.

There are about 9 million Java programmers across the globe. And when it comes to hiring professional Java developers, businesses are getting perplexed as to where they should look for the source of expertise. Java software development companies from the UK, India, and Ukraine rank among the best in the world for setting up a dedicated team of Java engineers. So below we present a concise overview of the talent pool of Java developers in the UK, Ukraine, and India to provide a complete picture of the countries’ potential for software development outsourcing.

The UK IT market dynamics

According to the 2018 report by Tech Nation and Dearoom, the UK tech sector grows faster than the rest of the economy. It outran the rest of Europe by attracting $7.9 bn in venture capital investment and saw $40 bn in exits from venture-backed companies in 2018.

Although investment in the sector remained strong, business activity decreased in the final three months of 2018. As the data from the latest UK Tech Monitor report states, operating expenses continue to rise and the IT market has shown its slowest rate of growth since the end of 2015.

In 2018, the IT market in the UK employed about 1 mln IT specialists, according to Statista. And 10% of them are Java developers, according to Linkedin.

However, the report by ECORYS UK says that the country still lacks about 40,000 IT professionals. In general, this costs the UK economy £60 bn every year.

The UK IT industry is currently experiencing an aging population and a decline in the amount of high-skilled IT specialists. The IT workforce in the UK is older than in other countries. On average 72% of the UK IT workers are over 35. The industry now struggles to engage younger workers into tech to bring new skills to the market.

According to Github, Java is the 4th most popular programming language among software developers by the number of users. Technologies like Artificial Intelligence and blockchain are of the main focus in the UK. Thus, JavaScript and Python are on a high rise.

A recent survey by Hays indicates that 79% of employers are facing hurdles when looking for suitable job candidates in such areas as data science, data analysis, and cybersecurity. They also claim to lack expertise in most areas of software development. So hiring professional Java developers in the UK can be a tedious process costing you a lot of time and money.

IT specialists in the UK have developed an entrepreneurial mindset, which is highly valued in today’s dynamic and volatile world. They are always ready to embrace change, take action and pursue initiatives.

Such open-mindedness and self-organization are related to the fact that the UK shares business values and the ethics of the Western culture. Plus, the majority of the UK software developers are foreigners who come from across the globe. Interestingly, London startups have the 4th most international workforce in the world.

Over recent years, the UK IT market has gained strength in the global tech scene. Nonetheless, the industry is now experiencing some challenges with talent shortage and worse access to funding due to its changing relationship with the EU. The results of the Tech Nation survey show that companies that are located outside London claim that they are not affected by Brexit. But those in Cambridge and London name Brexit among their top 3 challenges.

Tech firms are growing fast creating high-skilled and high-paying jobs. As data shows, the average salary for Java Developer in the UK is about £57,500. But in the Contract industry, this figure is reaching £114,663. Although higher salaries usually can offer a more comfortable lifestyle, even software developers who earn quite well find it challenging to live in the UK. The latest research revealed that the cost of living in London is 53% more expensive than in Brussels and 73% more expensive than in Madrid.

The Ukrainian IT industry is far ahead of the average growth rate of the sector in the world. It increases by 20-26% annually and currently has over 4,000 tech companies. Many of them have already gained recognition by major world ratings. For instance, Global Outsourcing 100 named 18 Ukrainian IT companies, including N-iX, to the annual ranking of the best suppliers of IT services in the world.

The IT community in Ukraine is booming. Kyiv, Lviv, and Kharkiv are the largest cities where the majority of software developers reside. Today, there are local IT clusters in the 17 biggest Ukrainian cities. They work together to organize conferences, meetups and launch various projects to improve the IT landscape in Ukraine. The year 2018 gathered over 15, 000 participants at major Ukrainian IT conferences, such as IT Arena, GDG DevFest, iForum, etc.

Investors from all over the world are venturing into Ukraine to hire the best talent. According to SkillValue, Ukraine ranks 8th among the world’s countries with the best programmers with an average score index of 91.26%.

Ukraine boasts the largest and fastest-growing number of IT professionals in Europe. This figure ranges from 160,000 to 172,000 software developers, according to DOU and StackOverflow correspondingly.

As Linkedin data shows, about a 30,000 of them are Java developers. By experts’ projections, the overall number of IT specialists in Ukraine is going to surpass 200,000 by 2020 with Java developers constituting a significant part of the talent pool.

According to DOU survey, Java, JavaScript, C#, PHP, and Python are the top 5 programming languages used in Ukraine. If to analyze their growth dynamics over recent years, Java remains the most popular language. Nonetheless, its market share during the last 2 years slightly decreased. The popularity of C# is slowly falling following the tendencies of the previous years, while the market share of Python is steadily growing as it’s becoming the most wanted programming language in the world.

In terms of business ethics and values, the Ukrainian corporate culture is similar to the Western one. The specialists from Ukraine are open-minded persistent risk-takers who don’t hesitate to take on responsibility. They focus only on what matters and are eager to ask questions to understand the peculiarities of the clients’ business. They want to see the big picture to help a customer to plan strategically.

Ukraine is shrouded with many myths about its economic and political situation. Businesses who haven’t worked with the Ukrainian IT companies usually view it as a poorly developed country with the post-soviet legacy. In recent years, Ukraine has made a great leap forward and joined the rows of the prospering European economies. It’s true, there are a lot of issues that need to be improved. In particular, in the areas of education, city infrastructure, and legislation. Yet, the most important steps have been already taken.

As for the 2017-18 reforms that impact the IT sector, the key improvements have been introduced in the areas of taxation, data protection, employment, and services export. Now, Ukraine is heading for economic growth and tech success in the international scene.

India now enjoys the status of the largest IT outsourcing destination in the world accounting for more than 67% of the global market. Java software development services present the lion’s share of all IT services the country offers. Exports from the IT industry reached $126 bn in FY18 and domestic revenues grew to $41 bn. By 2020, the engineering R&D and product development market in India is projected to increase to $45 bn.

The IT industry in India employs about 4 mln specialists. LinkedIn indicates that around 700,000 of them are Java developers. The major IT hubs are Bangalore, Delhi- NCR, Pune, Mumbai, Hyderabad, and Chennai.

There is currently a massive shortage of tech talent in India. What’s more, tech companies face high attrition rates. The layoffs in the IT industry amount to 3%-6% compared to the usual 1%-2%. By 2020, traditional IT jobs are expected to see a decline of 0.38% annually. While tech salaries have remained steady, the demand for very specific IT skills drives salaries to increase as employers compete for the best talent.

A recent study by Aspiring Minds reveals that a staggering 95% of engineers in India are not competent enough to suit high-level programming jobs. This means that the majority of software developers lack modern technology expertise and experience in tackling complex tasks that require problem-solving skills.

So far, the focus has been on programming languages such as Visual Basic, C, and C++. Java takes third place among primary coding skills prevailing in India. Educational institutions fall short in practical learning and hands-on coding experience. So, fresh graduates often need to learn skills from scratch at the companies they join. This significantly increases the cost and time required for talent acquisition. 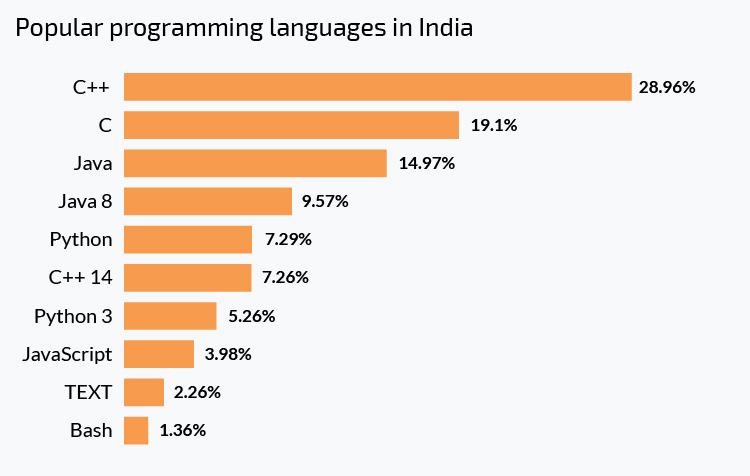 Uncommon business ethics and cultural differences may hinder software product quality and lead to delays in project delivery. It is usually challenging for clients to communicate technical and programming concepts to Java developers from India because the way they do business differs from Western traditions.

In India, it is considered rude to challenge anyone who is in a more senior position than yourself, even if they are wrong. Thus Indian software developers are not likely to question the client’s requirements and suggest some alternatives ways of product development. This causes miscommunication and a number of unresolved issues which could have been tackled at the early stages of the project development.

Read more about Ukraine and India as the leading outsourcing destinations in their regions to find out which country offers the best quality of services to meet your business needs.

On the one hand, lower labor costs, affordable real estate, and the establishment of software technology parks are attractive for international businesses. However, a lack of Java development expertise, an increasing talent shortage, and unfamiliar business culture make clients look for more mature software development partners. As a result, they start exploring Java software development companies from Eastern Europe that have successfully delivered Java-based solutions and can revive their projects rebuilding them from the ground up.

When you are looking to hire Java developers, a core Java skill set should be your top priority. You need to make sure that the Java developers you employ have experience in working with large-scale enterprise applications, design patterns, and multi-threading techniques. It’s vital to find a trusted Java software development company that can build a team of professionals who have a professional approach to Java development. You need to ensure that they will be able to keep on top of the rapid release cycles of new versions of Java and utilize the latest and the most efficient methods. So the main requirements for Java developers are as follows:

When choosing between hiring Java developers in Ukraine, India or the UK, it’s important to weigh up all the pros and cons of each destination. Onshore development in the UK will definitely be more costly and it will take much longer to hire a Java development team. Offshore Java development in India will be the cheapest but you may stumble upon quality and culture issues. Whereas Ukraine offers reasonable rates for Java development and a high level of code quality.