Outsourcing software developers: How to make the most of it

The talent shortage problem in the USA is getting more pressing: 1M computer programming-related jobs in the USA are expected to be unfilled in 2020. According to TechRepublic's CIO Jury report, 83% of CIOs struggle to find tech professionals. The biggest organizational level skill gap is in the domain of Big Data, Analytics, and information managers.

To combat this problem, some big companies run internal training programs, offer considerable benefits to their professionals, or pay extra. However, others choose to attract talent from other locations, as this option offers a wide array of advantages.

Also, as a result of the global pandemic, many businesses felt the urge to accelerate digital adoption as well as cut operational costs. All these factors make companies go for outsourcing developers.

But, where to find the best professionals, what skills should they have, and how to partner with top-notch outsourced developers? Let’s find out.

There are many reasons why you should opt for outsourcing software developers but here are just some of them:

Where to find the best developers for IT outsourcing?

If we compare the outsourcing rates by country, we can see that Asia, Eastern Europe, and Latin America offer the lowest ones. However, this fact has no negative impact on the quality of work, as the cost of living in these regions is also lower.

But what about technology adoption and tech expertise of the outsourced software developers from these locations? Let’s view it in more detail.

Eastern Europe is a region that unites countries such as Ukraine, Poland, Belarus, Bulgaria, the Czech Republic, Estonia, Hungary, Latvia, Moldova, Romania, and others. Businesses choose this outsourcing destination due to reasonable pricing, a vast talent pool, a skilled workforce, and a high digital adoption level.

The number of tech professionals in the region surpasses 1,051,000 people. What’s more, 50K ICT graduates enter the market every year. The three countries with the most significant number of developers are Ukraine, Poland, and Romania. 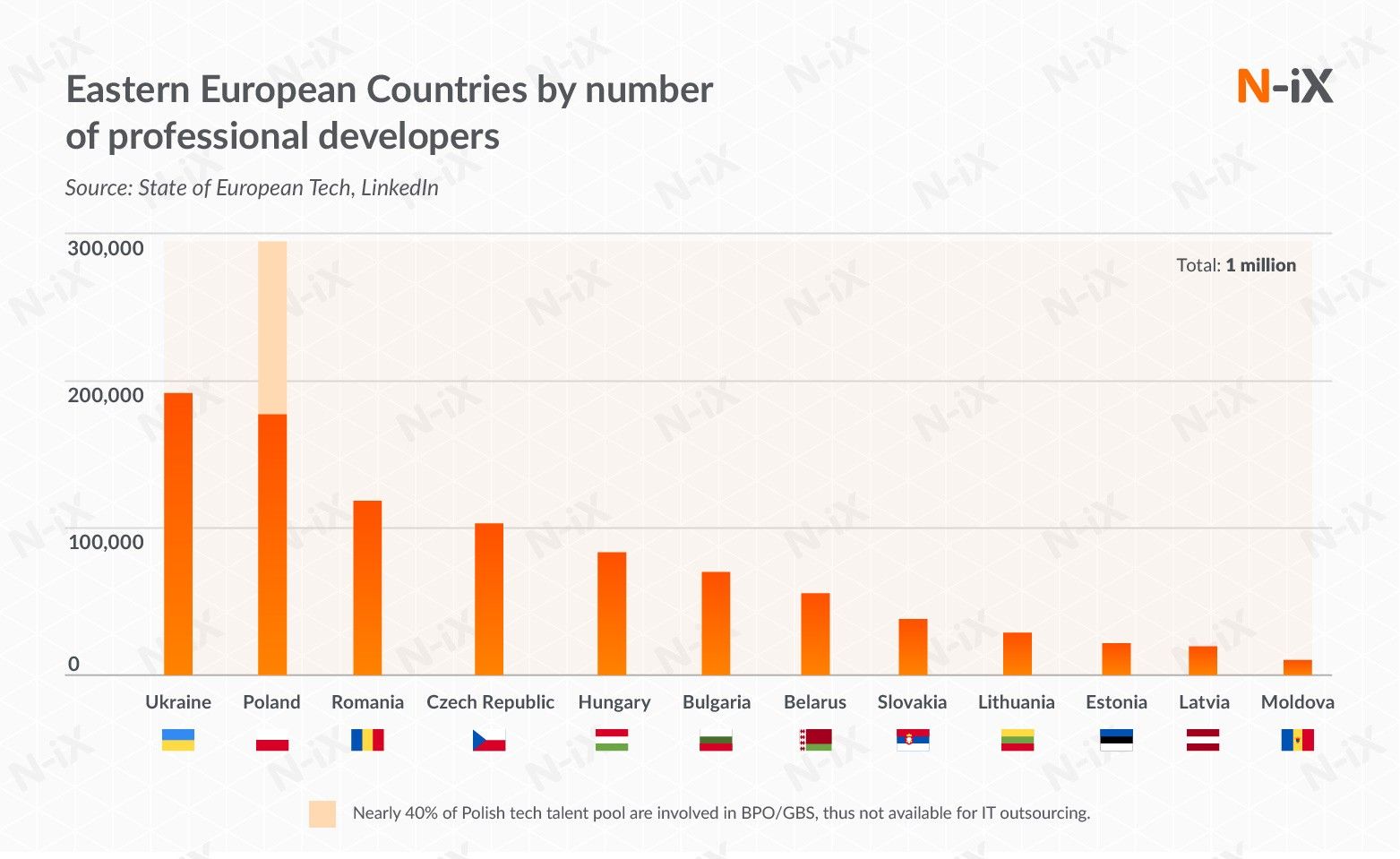 Ukraine has the largest number of outsourcing vendors in the region (1,600), followed by Poland (500+), Bulgaria (500), and Belarus (500). Companies in this region has strong expertise in outsourcing solutions development.

Also, according to the Organization for Economic Co-operation and Development (OECD), Eastern Europe outperforms other countries by an average of 11% in math and 10% in science.

To learn more about the education of Ukrainian outsourced developers - check out our article.

As mentioned earlier, outsourcing is a way to implement new technologies easier. Eastern Europe is a bright example of the destination that can help you with that. If we compare technologies offered in Eastern Europe and the rest of the world, we see that the region gravitates towards newer technologies, such as back-end JavaScript, IoT, Blockchain.

At the same time, the region continues to lean toward JavaScript, Ruby, and Python, which further feed the IT ecosystem.

Security is of the utmost importance when cooperating with an outsourced development team: data protection, intellectual property rights, and other aspects have to be taken into account.

We can view security both from the perspective of the country you outsource to and the vendor itself.

The significant part of the countries of the region are the EU-members, thus have robust data-related regulation. Legislation of others, at the same time, is harmonized with the EU-law. For instance, Ukraine has the law “On Protection of Personal Data” that focuses on data protection in the private sector.

Here are the most critical compliances your vendor should have: 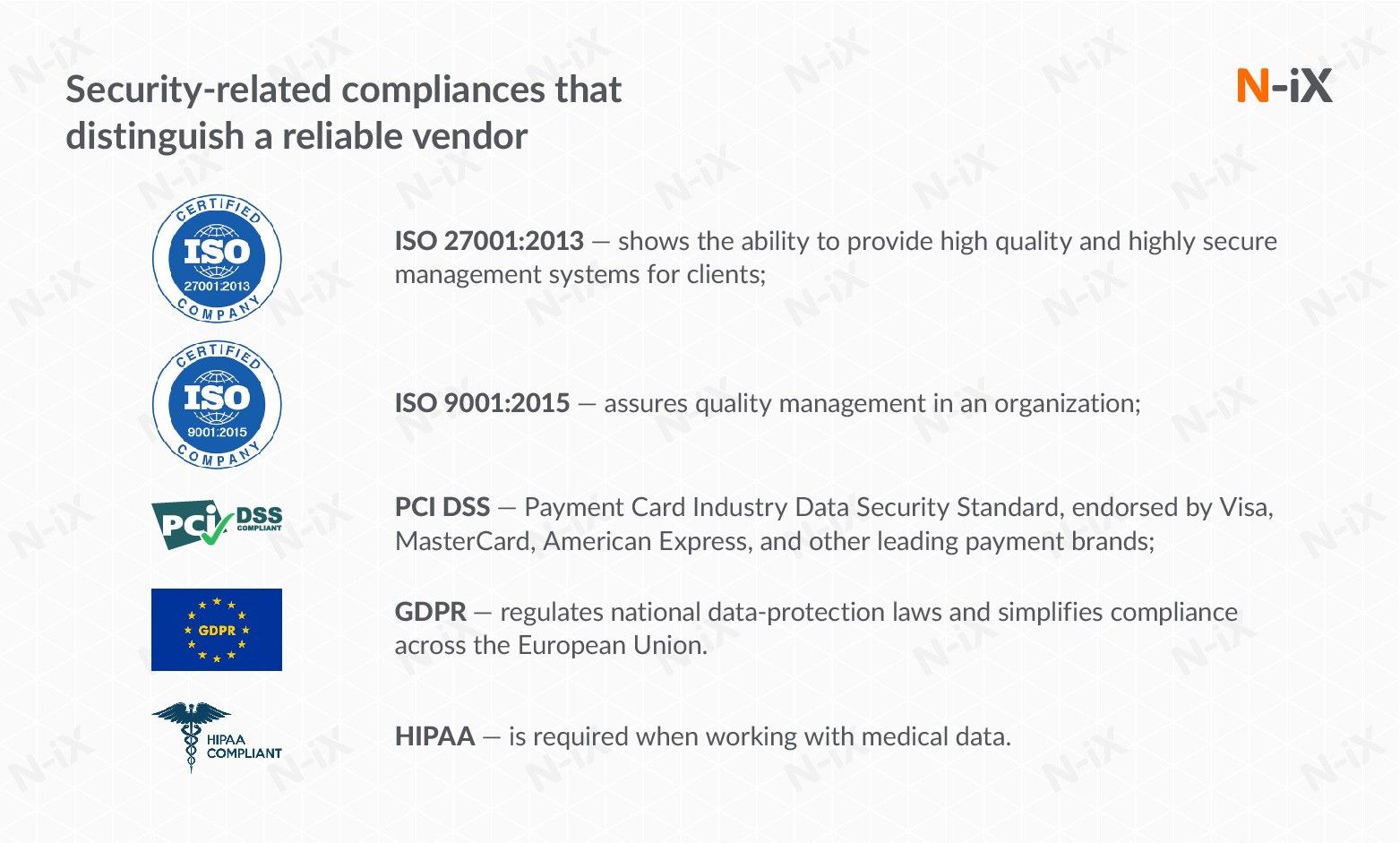 An average hourly rate in Eastern Europe is $39.00/hour, which is 18% higher than in Asia but still dramatically lower than in Western Europe, Northern America, or Oceania.

In this case, a higher cost is not a disadvantage, though. Businesses that have chosen this destination to find an outsourced development team state that they get better ROI due to cooperation with outsourced software developers from Eastern Europe.

Eastern Europe has a reliable Internet, and electrical outages are a rare case. In terms of the Internet’s quality, the region is on par with Western Europe and North America.

Asia, as an outsourcing destination, combines countries such as India, China, the Philippines, Malaysia, and Singapore. However, we will view the three first ones in more detail. 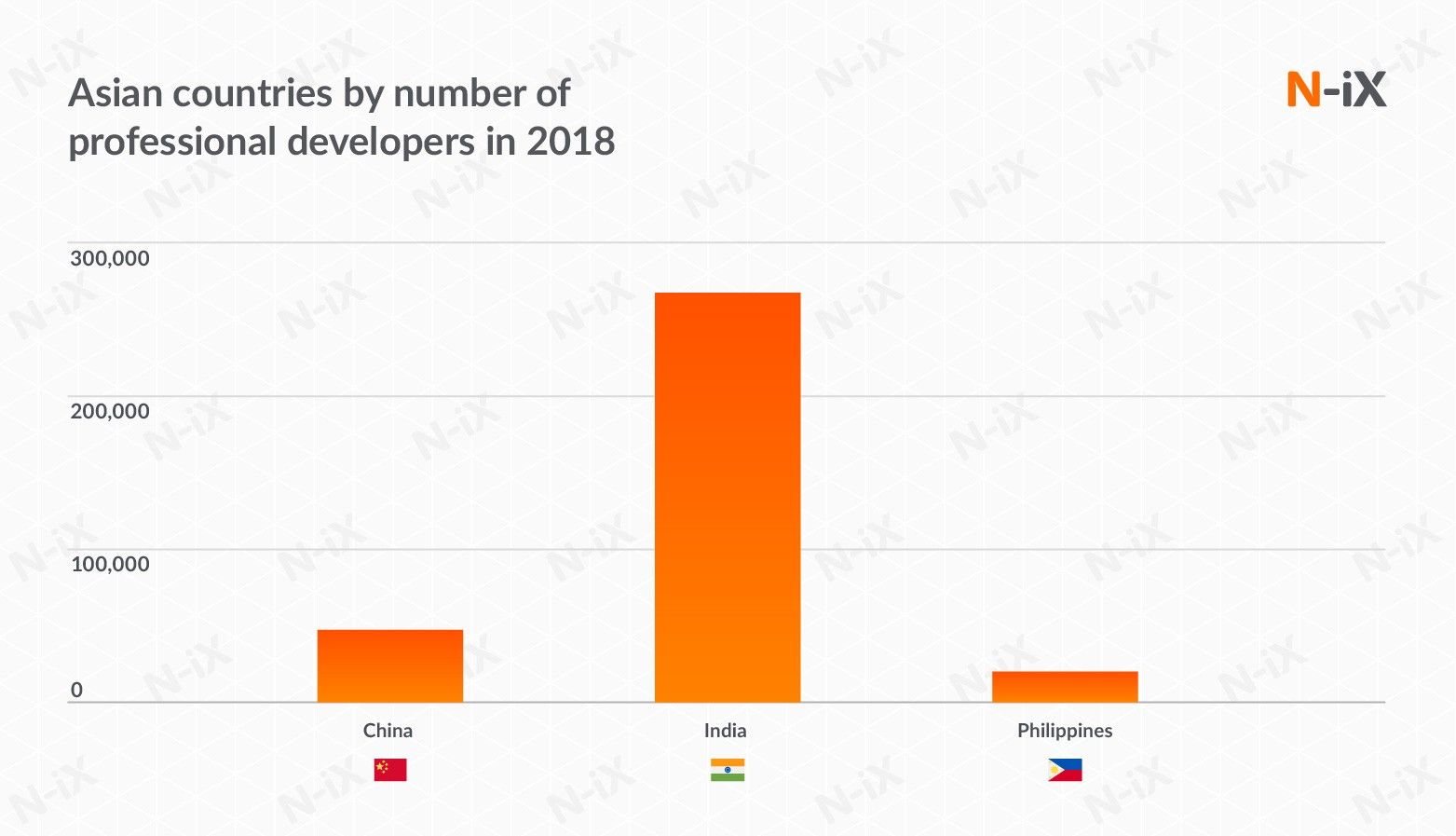 Crunchbase recognizes more than 1000 companies that provide IT outsourcing services in Asia. However, the virus outbreak has influenced their work fundamentally. Indian BPO suppliers and smaller IT players have faced major hurdles, thus having a negative impact on outsourcing in the region.

Times Higher Education World’s University ranking recognized 25 computer science universities in India, 60 in China, and just one in the Philippines.

China boasts the best-educated talent that is also proven by the HackerRank ranking that puts Chinese outsourced developers in the 1st place across the globe.

Asia offers primarily tried and tested technologies, including PHP/MySQL and WordPress. So, if you look for cutting-edge technologies outsourcing, you should consider other options for hiring an outsourced developers team.

However, Asian outsourcing software developers are pretty skilled in what they do: according to the TopCoder Rank, Chinese developers have made it to the top-3 best developers.

As far as top domains as Big Data and Cloud are concerned, LinkedIn lists over 270,000 Big Data professionals as well as 630,000 Cloud specialists in Asia. The majority of these professionals reside in India.

Asian developers have the lowest hourly rate in the outsourcing market, as they get, on average, $24.62/hour. However, cost-effectiveness is a more important factor than a cost itself when we speak of cooperation with an outsourced software development team.

IT infrastructure is a weak spot in Asia as an outsourcing destination. Yes, the Internet quality in India, for instance, is rather poor that influences the quality of services they provide.

Brazil, Argentina, and Mexico are the countries with the most significant number of professional developers in Latin America. The overall tech talent pool in the region exceeds 500K and consists mostly of the outsourcing developers.

Brazil boasts the biggest talent pool in the region and exceeds other countries significantly, with 431,000 outsourced developers. The second-largest pool in Mexico with its 180,000 specialists. Argentina comes third with over 100,000 professionals. Colombia and Chile are also famous in terms of outsourcing developers, as these countries house 55,000 and 58,000 tech specialists, respectively. 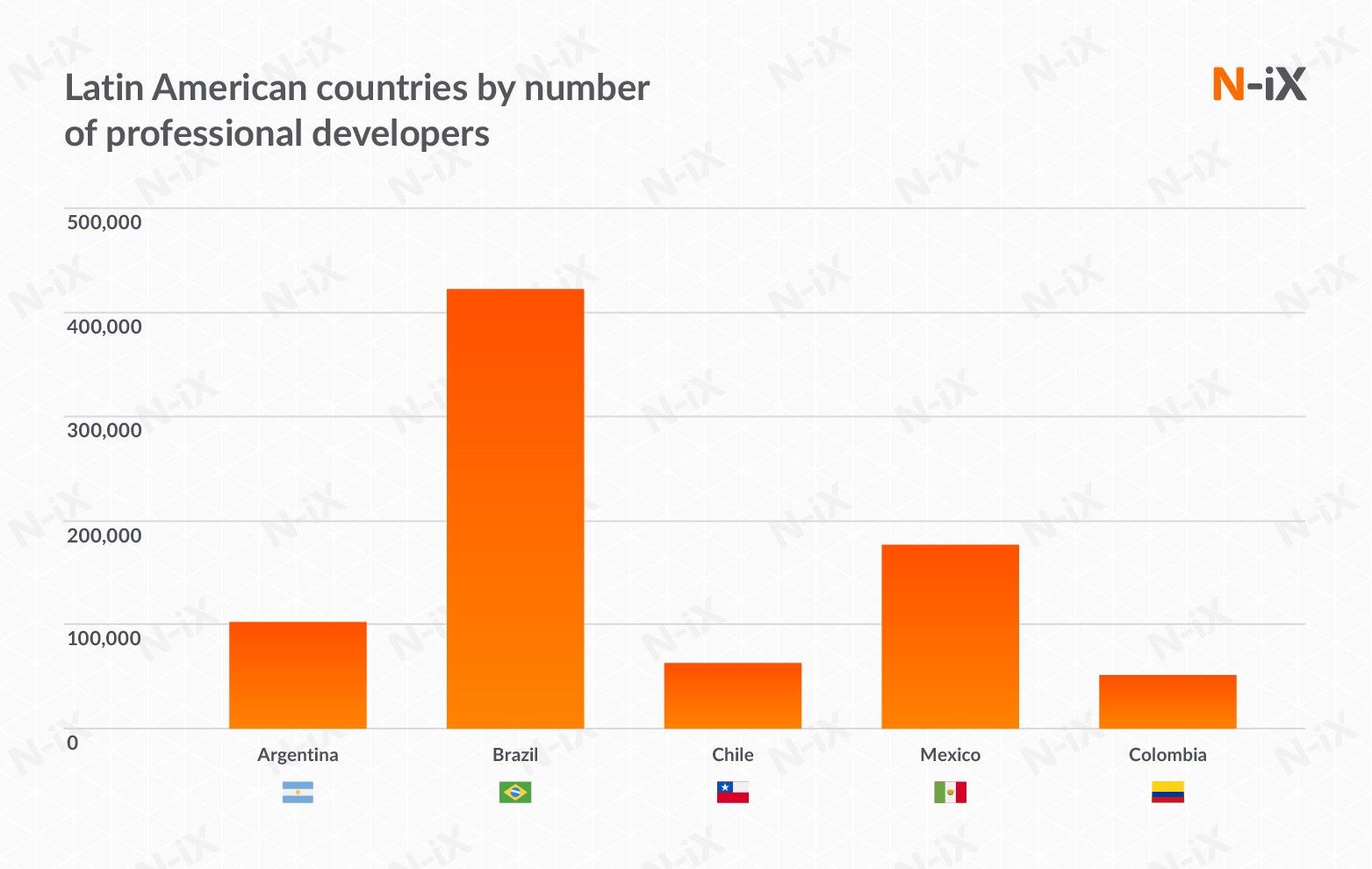 Clutch.co lists 1,100 IT outsourcing companies in the region, however, not all of them have delivery centers there.

Lack of recognized educational institutions is reflected in the professional rankings. Chile has the best-skilled talent in the region, yet takes 27th position in the HackerRank ranking of developers.

According to the SourceSeek report, the outsourcing developers from Latin America specialize in PHP/MySQL, along with .NET and Azure.

The outsourcing software developers in Latin America have similar rates as their colleagues from Eastern Europe: with nearly $38.00/hour on average.

The talent pool, the number of companies you can hire an outsourced development team from, tech education, and skills are the important factors when choosing an outsourcing destination. However, there are some aspects you should consider while choosing a vendor itself. They are a robust knowledge transfer plan and a recruitment team of your vendor-to-be. Let’s view these factors in more detail.

How to choose a vendor to hire a team of outsourced developers?

Knowledge transfer is of paramount importance when it comes to cooperating with an outsourced development team.

It is possible to transfer knowledge either from a client to a vendor or from a previous vendor to a new vendor. No matter what option is yours - the plan consists of the same stages. They are a demo and the investigation at the beginning, setting up the environments, taking over business-as-usual, and the first successful release in the end.

However, these stages are hardly possible if the vendor does not have a robust plan on what information assets to collect and how to organize the process itself. So, to ensure a smooth and safe knowledge transfer journey, hire an outsourced software developers team from a vendor with a reliable knowledge transfer plan.

A skilled recruitment team is a must when it comes to hiring an outsourced software development team. The key to successful recruitment is finding an individual approach to each candidate and attracting the best talent to the project.

These stages ensure that only the best candidates that can suit all the requirements and selection criteria can get a job.

Also, skilled recruiters make use of various channels of search that help to find top candidates. These channels are, for instance, Linkedin, Dou.ua, Djinny, work.ua, rabota.ua, particular communities (a game dev community, etc.), recommendations (both internal and external ones).

What’s more, big companies normally gather an internal base of candidates. For instance, N-iX, one of the largest Eastern European software development providers, has been building up such a base since 2002, and now it comprises over 57,000 candidates.

All in all, you should look for a company with a skilled recruitment team that will help you engage the best professionals for your project and gather a top-notch outsourced development team.

To learn more about other selection criteria, such as business continuity plan, agility, DevOps practices, powerful employer brand, etc., check out our article on how to choose the best offshore software development company in 2020.

And now, let’s proceed to the legal aspects of cooperation with outsourcing developers. Namely - what aspects you need to pay attention to while signing a contract with an outsourcing vendor.

How to sign a win-win contract with an outsourcing vendor?

Here are the things that you should be keeping in mind when signing a contract with the outsourcing vendor:

Companies that benefited from cooperation with outsourced developers

Lebara is one of the biggest European mobile virtual network operators that functions in eight countries. The company partnered with N-iX for the full-cycle development of new products and their maintenance. N-iX has set up a development center for Lebara (100 + outsourcing developers), worked on its multiple products, and contributed to Lebara's successful Digital Transformation.

Gogo is a provider of in-flight connectivity that has over 20 years of experience. The company partnered with N-iX to support business functions and decisions with analyzed and prepared data. N-iX outsourcing developers have helped Gogo migrate on-premise data solutions to the cloud and built a unified AWS-based data platform that collects data from 20 different sources.

RateSetter is a leading peer-to-peer lending company in Britain and Australia. In 2016, RateSetter partnered with N-iX and started cooperating with an outsourced software development team of 16 people to modernize its product. Outsourcing software developers has allowed RateSetter to migrate from monolithic architecture to microservices and improve the performance and flexibility of their platform.

Currencycloud is a platform that delivers cross-border payments as a service. The company has partnered with N-iX since 2013. This cooperation started with outsourcing developers and a team of four experts. Since 2018, N-iX specialists have been involved in transitioning to microservices and data migration to the fully-managed Kubernetes cluster. Our professionals are engaged in the development and maintenance of Currencycloud’s products, including Currencycloud Direct, Collections (support & audit of all funds flows), and Cash Manager.

18 August 2022
All you need to know about IT staff augmentation: Ultimate guide
The demand for qualified software developers is growing faster than ever. Companies in the USA and the UK often fail to find qualified candidates to meet their tech needs. The CNBC quarterly poll show...

15 May 2020
How to ensure secure software development in the time of remote
''There’s no question that it has become harder to maintain standards in one key area: cybersecurity. As millions have transitioned to working from home, the strain on computer network...