The global gaming market was valued at $173.70B in 2021, and this number is expected to double within the following 5 years. The demand for talented programmers and artists is at its peak now, which created fierce competition among many outsourcing companies with skilled and talented specialists.

For this article, we decided to compile a top of the best 3D game art production companies as of 2022 that offer outsourcing services worldwide. Our team carefully studied profiles of more than 150 3D art outsourcing studios: their portfolios, client’s feedback, social media, and presence on research & review platforms like Clutch.co and GoodFirms. Then we selected the 10 most promising candidates based on the following criteria: 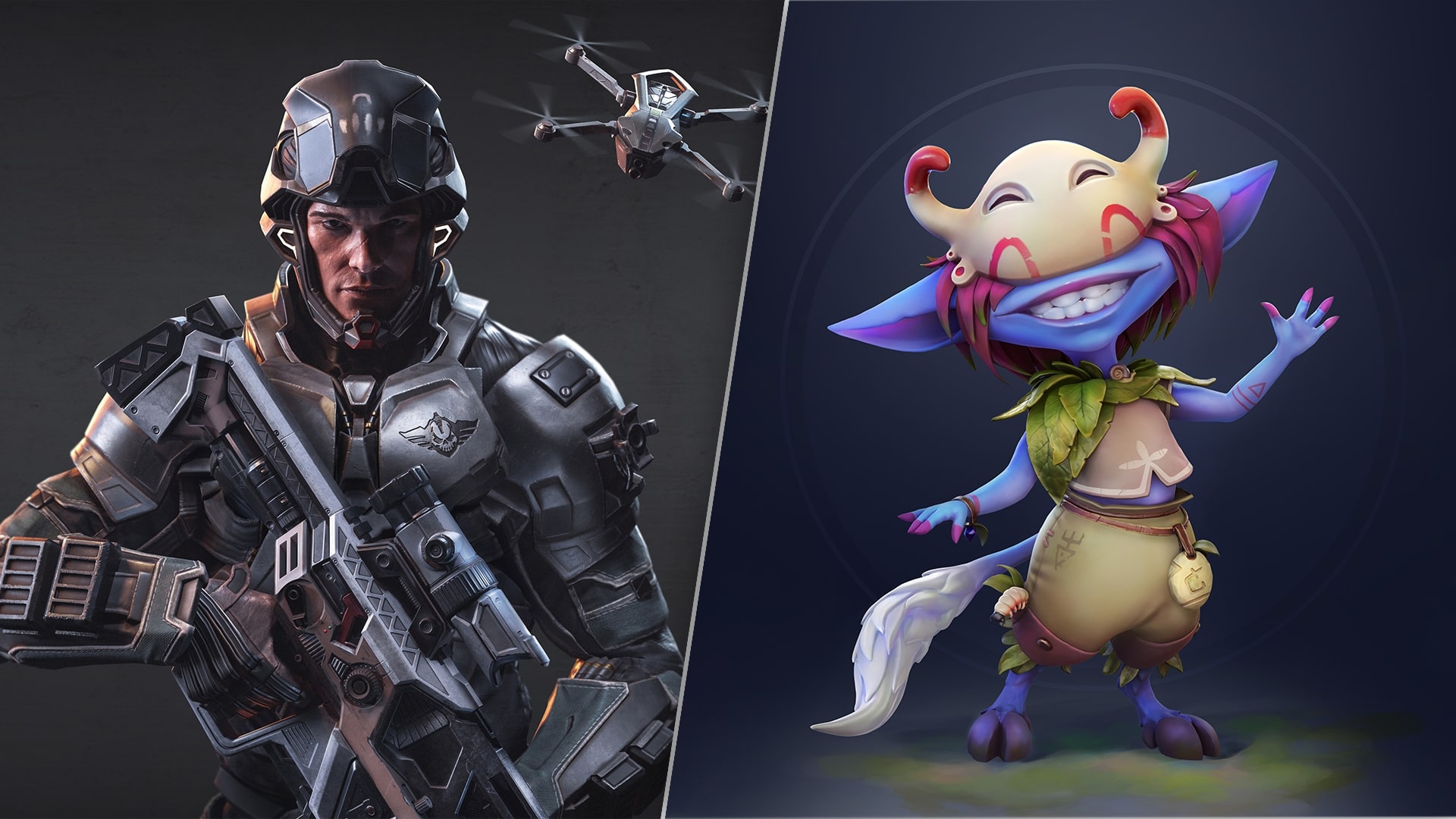 Established in 2012, N-iX Game & VR Studio started out as a separate unit of N-iX, a leading European software development company with 1700+ specialists and 20+ years on the market. Currently, the studio has over 240 passionate game development professionals and is focused on providing an array of game development services, including 2D/3D game art production, animation, motion capture, VR and NFT solutions development, UE and Unity game development, etc.

Over the past two years, this 3D game studio has contributed to such triple-A and large projects as World of Tanks, Sniper: Ghost Warrior Contracts 2; Remothered: Broken Porcelain; Stellaris, and Crusader Kings III. N-iX Game & VR Studio also developed a unique art style and game mechanics for the upcoming competitive game, the Bazaar.

This Serbian 3D art outsourcing studio is a part of Epic Games Inc. since January 2019. The company is focused on the digitization of human appearance and motion in video games. The range of their services includes character rigging, face rigging, character modeling, 3D scanning, consulting, and more.

This 3D artist studio has a profound experience working with triple-A game titles, including Devil May Cry 5, Hellblade, Horizon, Zero Down, and others.

This art studio (3D) was established in 2008 and since then has managed to contribute to over 35 shipped titles. The company houses about 100 artists who can deliver a full range of 3D art production services, such as concept art creation, 3D modeling, texturing, skinning, rigging, animation, etc.

Their team took part in the art production of such notable game titles as Fortnite, Godfall, Smite, Call of Duty Vanguard, and Rage 2.

The company provides an extensive portfolio of both arts and projects, which include such game titles as Diablo 2 Resurrected, Call of Duty: Black Ops 4, Crash Bandicoot 4, Hitman 3, and others.

The company was founded in 2016 and became a part of the Virtuos company in 2022. Its team is now comprised of 140 specialists. Their core competencies are 3D assets creation with expertise in concept art production, creation of photorealistic and cartoon models, and mobile full-game development.

This veteran 3D game studio that was founded in 2005 is currently based in San Francisco, the Philippines, and Madrid. The company has over 200 specialists that can deliver a range of game development and art production services, including 2D/3D game art and full-cycle development with a wide coverage of platforms.

The company cooperates with such known game development companies as Blizzard Entertainment, Naughty Dog, Konami, and CD Project Red. Their team contributed to such game titles as The Last of Us Part 2, Shadow of the Tomb Raider, Rage 2, and others.

Ocellus is an art production and game development studio based in Lyon, France. They specialize in art creation for stylized video games and have a distinctive style and vision. They have contributed to such titles as Armello, Clash of Clans, Clash Royale, and Tom Splash Force.

N-iX Game & VR Studio had the pleasure to cooperate with Ocellus to create animations for the main and side characters for the game Asterix & Obelix XXL 3. Our team worked hand-to-hand with the client’s team, and together we delivered stellar art.

“We worked with N-iX for almost a year and have found them to be reliable, competent, and very talented. Feedbacks were met with efficiency, and it was a pleasure to exchange with them daily. We had a great time operating with them and won't hesitate to work with them in the future!”  - says Lena Couty, Junior Producer at Ocellus.

This 3D game studio is located in Kyiv, Ukraine and has been present on the market since 2005. The company is focused on 2D/3D art, concept creation, 3D animations, scans & photogrammetry for games.

The studio has a proven track record of working on triple-A projects: Call of Duty: Infinite Warfare, Hitman 2,etc. The company also works with leading game producers, including Deep Silver, Capcom, Activision, and others.

This 3D art outsourcing studio cooperates with Epic Games, Electronic Arts, Genies, Gunfire Games, and other recognized companies. As for the portfolio, this 3D artist studio contributed to such game titles as New World, Killing Floor 2, Risk of Rain 2, and others.

Why Choose N-IX Game And VR Studio as Your 3D Art Outsourcing Partner?

Paradox Interactive is known for their grand strategy state of art games. Each of their titles receives overwhelmingly positive feedback from gamers and inevitably forms a community that remains active for years.

N-iX Game & VR Studio team is glad to assist these projects with our art production services. We have been good partners with Paradox Interactive since 2017. Our studio took part in 2D and 3D art development for such titles as Stellaris, Crusader Kings III, Hearts of Iron IV, Imperator: Rome, Europa Universalis IV, and the upcoming game Victoria 3. As our cooperation with Paradox Interactive continues, N-iX Game & VR Studio remains an active contributor to their grand strategy gaming projects.

“We have been working closely with N-iX for a couple of years now, on multiple projects. N-iX are quick, they're reliable and receptive to the feedback we may have. We are happy with the quality of their work, and the communication with the management and leadership has made our everyday work and collaboration easier.” - Anton Wittberg, Art Producer at Paradox Interactive.

World of Tanks (WoT) is a massively multiplayer online game that is played by more than 72 million registered players around the world. It was developed and published by Belarusian company Wargaming. Players of WoT can choose between hundreds of armored vehicles and thousands of thrilling online battles. N-iX Game & VR partnered up with Wargaming back in 2018 to assist them with art production. As of 2022, our cooperation continues and we regularly deliver high-quality art for their game phenomenon, paying scrupulous attention to historical accuracy.

“Game artists of the N-iX Game Development & VR studio helped us design tank model skins for different holidays and gaming events. The work was challenging yet fun. All the tasks called for full immersion into the creative process and required the team to make multiple sketches. And we’d like to say a special thank you for the support of the ‘War Child Armistice 2018’ charity event. Selling the camo skins created by N-iX game artists enabled us to raise money for 1290 children affected by the military conflict.” - Yury Rohach, Outsourcing Manager at Wargaming.

24 November 2021
8 Best Unity Game Development Companies
Such games as Cuphead, Hearthstone, Hollow Knight, Ori and the Blind Forest, and Rust are most definitely among the favorites of many gamers. Those are some of the most successful titles built with th...

11 November 2021
Game Development Outsourcing: How to Choose a Trusted Company
While the benefits of outsourcing are indisputable, especially in these remote times, the outsourcing experience often depends on the right choice of a vendor.  In this article, we want to sha...