There is no doubt: we are living in an industrial society where technology is impacting products, services, and processes. It is breaking down barriers and many sectors are adopting and embracing change. The insurance industry is not an exception. Technology has occupied a major role in insurance business helping companies reach strategic goals. According to the latest Accenture report, investments in insurtech increased from $800 million in 2014 to more than $2.6 billion in 2015. The demand for insurtech is on the rise and it continues to move at a steady pace in 2016. Solutions from insurtech developers are flooding the market and offering new advanced ways of insurance. In fact, the first quarter of this year brought more than $650 million in funding to insurtech. 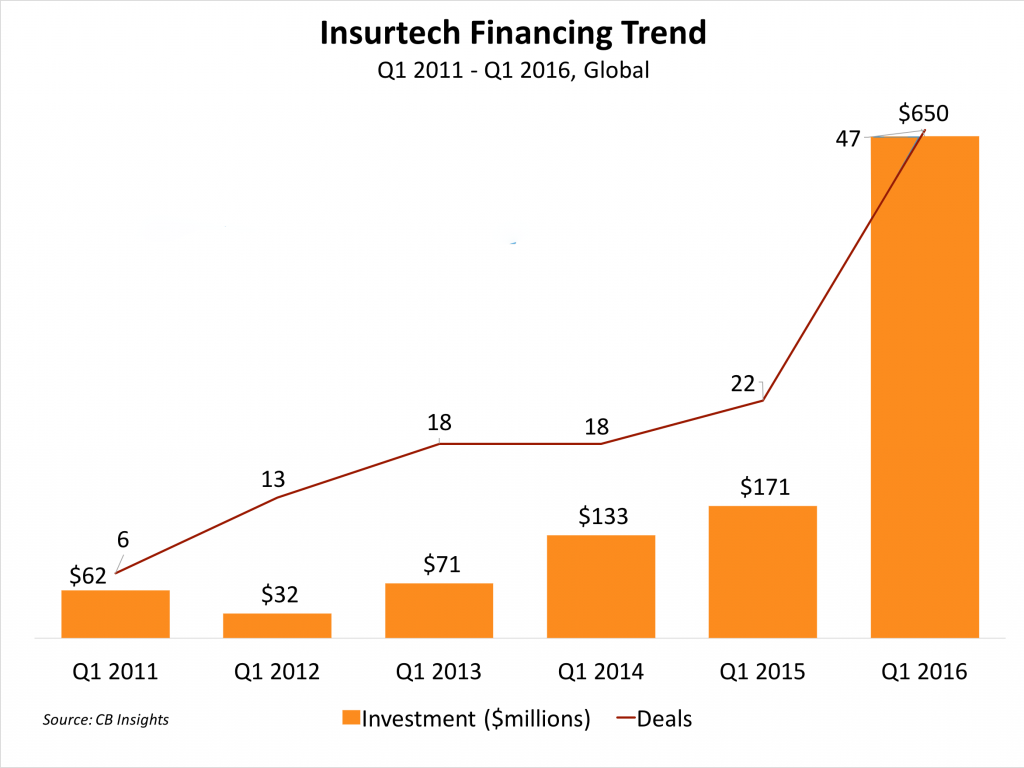 Digitalization is driving insurance executives to reassess their business models and transforms consumer behavior. The number of insurers who are supporting the digital shift is rapidly growing as well as the demand for accessing everything via mobile phone. Moreover, the increasing importance of the collected data suggests that we are going to witness many integrations, partnerships and acquisitions in the nearest future. So, let’s have a closer look at the main digital innovations introduced by insurtech developers in 2016.

The IoT market is expected to reach $1.7 trillion in 2020 and the number of devices is expected to reach 29.5 billion. It is going to transform what consumers know and how they act, both among themselves and with insurers over the next few years. Sensory devices with an access to networks will change the way insurers traditionally conduct business.

Nowadays, consumers expect insurers to provide broader coverage with personalized services that adapt to their behaviors and preferences. Moreover, nearly 80% of people would change providers for better-tailored insurance to get more personalization. The Internet of Things makes it possible. The cycle of invention and customer adoption continues to speed up. Insurers are now using technology to track customers and encourage safe behaviors. For example, John Hancock’s Vitality program uses FitBit data which helps policyholders adjust their premiums by adopting healthy habits.

In addition, IBM recently acquired the digital assets of The Weather Channel. Moreover, The Weather Company’s digital assets and its massive network of data-collecting sensors, forecast locations, and facilities are now under their control. The collected real-time data can prepare insurers for natural disasters and prevent some losses as well as estimate potential payouts. This will help companies save money in the long run.

At the same time, wearables would collect and transmit various data about the activity of the people who are wearing them. Data from wearables helps insurers continuously monitor information about their customers. So, with the help of IoT and wearables, insurers can closely analyze customers’ behavior and identify their needs and risks (including health risks).

Just-in-time insurance is aimed at increasing efficiency and decreasing waste. It gives people the possibility of purchasing insurance only as it is needed and wanted, thereby reducing extra expenses and saving time. This branch is rapidly attracting investments. Many Insurtech startups offer consumer-facing products at the click of a button and have already leveraged the demand for just-in-time insurance.

For example, Sure is expanding the capabilities of travel insurance. It offers easy on-demand insurance that lasts from take-off to landing. Another innovative startup is Trov – the world’s first on-demand home insurance which is an entirely mobile experience. It gives a possibility to turn protection on and off with just a few taps. Moreover, you are able to organize important information about the things you own and it’s accessible anytime you need it.

On top of that, digital insurance platform Cuvva is one of the leaders in short-term car insurance. It provides auto cover via mobile for the exact period of time you need it. For example, you are able to buy one hour of cover within just a few minutes.

This model reverses the traditional insurance model and relies on the collaborative consumption concept. It is aimed at saving money by reducing overhead costs, claims payouts, and inefficiencies. Moreover, it focuses on increasing transparency and reducing the conflict between insurance carriers. 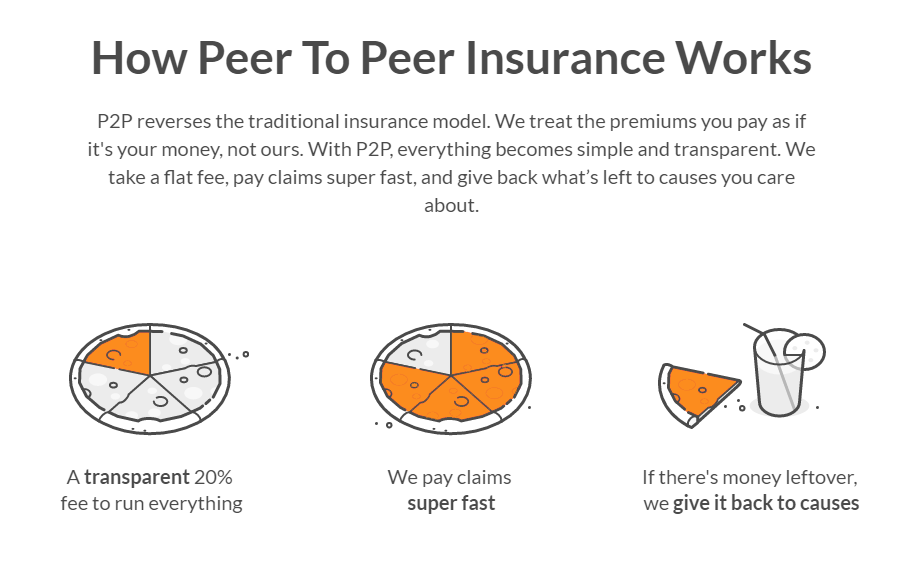 Peer-to-peer (P2P) insurance has been steadily gaining recognition. At the end of 2015, P2P insurer Lemonade received $13 million of funding from major investment group Sequoia. This startup is a property and casualty insurance company. It is applying peer-to-peer technology and challenging the way insurance companies work. The company handles and pays most claims instantly. The mechanism of its work can be described like this – small groups of policyholders pay premiums into a claims pool. In case there’s any money left in the pool at the end of the policy period, members get a refund. It requires only 90 seconds to get insured and 3 minutes to get paid.

Another insurtech startup based on P2P insurance model is Teambrella. It has developed a unique insurance system that uses bitcoin to hold client money. Moreover, users can make decisions on every aspect of insurance in a team without any intermediaries. In order to make this system fair, the risk coefficient for team members is established. Those members whose coefficient is the same -cover each other for the same amount. If one person’s risk factor would be lower, they are eligible for extra insurance coverage by the other party.

Blockchain is one of the hottest topics for the insurance industry in 2016. Smart contracts powered by blockchain could provide numerous opportunities for customers and insurers. Managing claims in a transparent and responsive manner becomes possible. All contracts and claims recorded onto a blockchain are validated by the network. These pieces of software extend blockchains applicability. It is not only recording financial transactions entries but also automatically implementing terms of multiparty agreements. So, smart contracts enforce the claims and trigger payments automatically when certain conditions are met and validated.

Insurtech developers have already created many interesting startups on the blockchain. The immutability of blockchain stimulates insurtech developers to create even more innovative products. For example, Dynamis – an insurtech startup has leveraged blockchain in insurance. This company has successfully created P2P insurance on the Ethereum blockchain platform. It uses the LinkedIn social network as a reputation system and provides unemployment insurance. Applicants for a new policy can use LinkedIn to verify their identity and employment status. While claimants can use their LinkedIn connections to approve that they are looking for work.

Another startup which was started on the Ethereum blockchain platform is Plex.Ai. It uses Artificial intelligence to re-engineer the way insurance and risk management is done. According to Deloitte analysis, Artificial intelligence will boost insurer bottom lines by reducing headcount in underwriting and claims. Moreover, it will increase precision in pricing and fraud investigation and facilitate personalized coverage.

All things considered, insurers face extensive transformation of their sector influenced by various technologies. Internet of things, blockchain, Artificial intelligence and other technological advancements are already changing the world of insurance dramatically. Insurtech developers contribute to progressive startups such as Sure, Lemonade, Dynamis and many others. All of them simplify the insurance process and make it more accessible and transparent. They give users an ability to insure something just at the time they need it without middlemen and extra spendings. Now, with just a few taps, you can switch your insurance protection and more is yet to come. 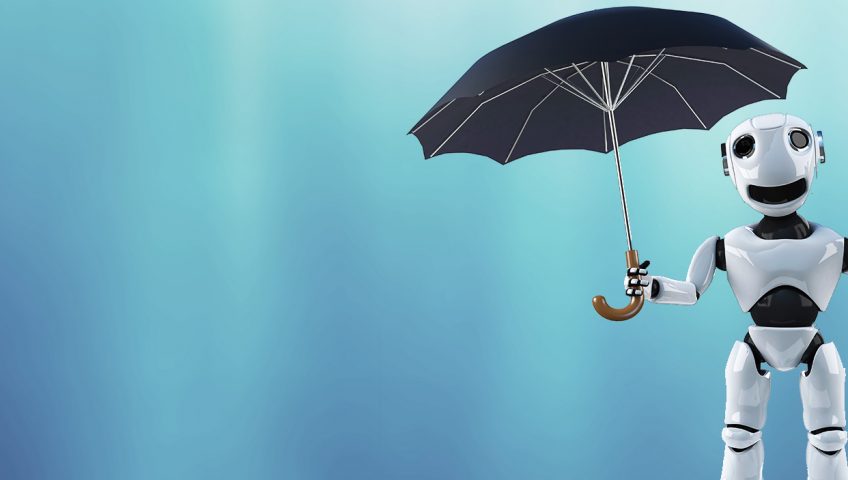 31 March 2019
The top 7 IT outsourcing trends that will rule in 2019
The future of IT outsourcing, by all expert projections, will continue to grow in the years to come. As data shows, more and more businesses will choose to outsource their services to specialist provi...

21 March 2018
Top regtech development trends and companies to watch
The state of the financial regulations market is constantly changing, thus companies are under constant pressure to keep up with the latest standards. As this regulatory burden grows both in weight an...