IT facilities and infrastructure in Ukraine

The development of IT infrastructure and facilities in Ukraine is a result of the impressive growth of the IT market in recent years. According to IT Ukraine Report, the IT industry in Ukraine is growing at a 26% rate. The country can boast of more than 1,6K IT companies and more than 4K tech companies. IT firms have increased both in number and size, creating the demand for quality office spaces with robust tech infrastructure, which will attract even more talent to the market. In this article, we will overview important centers of the IT industry in Ukraine and infrastructure there.

The article is based on the recent report on the state of software development in Ukraine.

IT Facilities and infrastructure in Ukraine: an overview

One of the reasons for this is the favorable geographical position: it is easy to reach from key global business hubs. There are 19 passenger airports here, and new routes keep opening.

More importantly - the vast majority of countries do not need visas to go to Ukraine. Besides, the opening of many new international businesses triggered the need for more transatlantic flights. 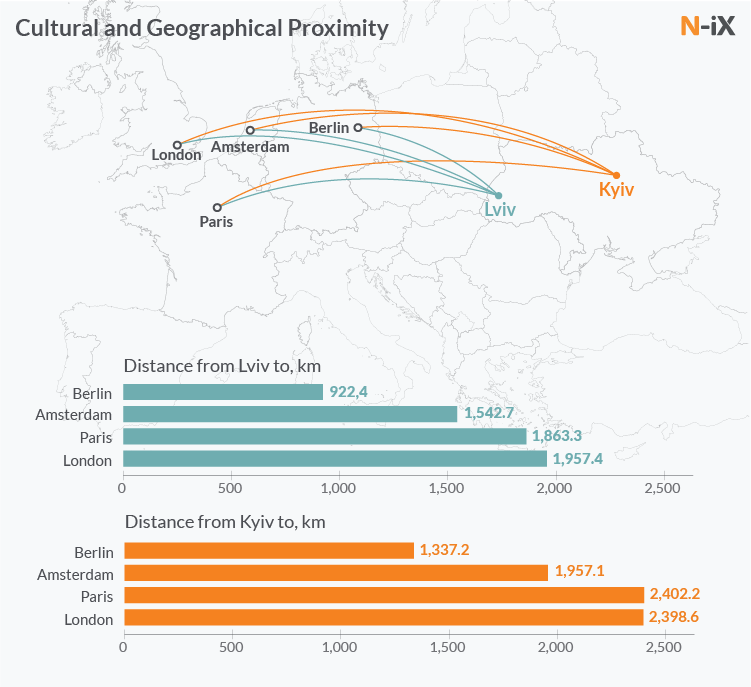 Boryspil Airport near Kyiv is the biggest in the country. It has two runways, four passenger terminals with a total capacity of over 5,000 passengers per hour, one cargo terminal with nine warehouses and a total area of 14,580 m2. Its facilities are used by 33 airlines, which provide 76 regular flights.

Lviv, another Ukrainian IT hub, also has a new modern airport, which welcomed 1.1 million passengers in 2017.

Odesa, Dnipro, Kharkiv, and other major Ukrainian cities also have rising flows of passengers in their airports.

Tourism contributes significantly to the economy of Ukraine. So, the network of hotels, restaurants, and cafes is highly developed.

There are currently 4,115 different types of hotels, according to the State Statistics Service of Ukraine, and there are over 6,200 properties on Booking.

According to the Nielsen report, there were over 11,000 businesses in the HoReCa segment in 6 biggest Ukrainian cities (Kyiv, Dnipro, Lviv, Kharkiv, Odesa, and Zaporizhia) in 2017, and this number has grown ever since. Experts assess the volume of the Ukrainian restaurant market of $769M, and by the number of establishments (over 15,000), it has reached the before crisis period of 2013.

Infrastructure in Major IT Cities, such as Kyiv, Lviv, Kharkiv, Odesa, and Dnipro, is developing at a quick pace. With software developers moving there and their high purchasing power, the real estate market has soared in recent years. This trend helps the cities grow as well as improve the quality of living. IT companies, as well as investors, are interested in alluring more talented developers to the industry. They can do so by creating more comfortable working conditions for their employees.

IT companies do not stand by and initiate their infrastructure projects. Usually, local IT clusters, external investors, as well as state authorities, help them realize these projects. According to Ukrinform.Investments, Ukraine attracted almost $2.5M in foreign financing in 2018. Speaking of the IT sector, the most significant investment was $10M for Ukrainian startup Grammarly.

IT clusters contribute to the development of IT infrastructure to a great extent. Such organizations operate in Kyiv, Lviv, Odesa, Kharkiv, Lutsk, Cherkasy, and others. Their main aim is to improve the business environment and attract more investments and companies to their cities.

IT Clusters also unify the people that belong to the same industry. For instance, every second developer in Lviv is a member of this organization. The biggest IT outsourcing companies partner with clusters to provide benefits for their employees, such as discounts, special offers and others.

IT parks and centers

Let’s start with the project initiated by the Lviv IT cluster - the Innovation District IT Park. It is also the largest one in Western Ukraine.

This project is very complex, as many different aspects were taken into consideration. For instance, DTZ (real estate company) surveyed 35 biggest Lviv IT companies and found out what exactly they would like to see at IT Park. Thus, District IT Park will correspond to the needs of the main stakeholders: Ukrainian software developers. As reported by this survey, the vast majority of CEOs (91%) are ready to relocate their employees to more modern and comfortable offices.

IT park is stretching forth 10 hectares and designed to host up to 14,000 people. It will consist of 6 class A office buildings, with a total area of around 164,000 m2, three business centers, a 200 keys hotel, and a designated multi-functional area for leisure and social needs, according to IT Cluster. The budget amounts to $160M. 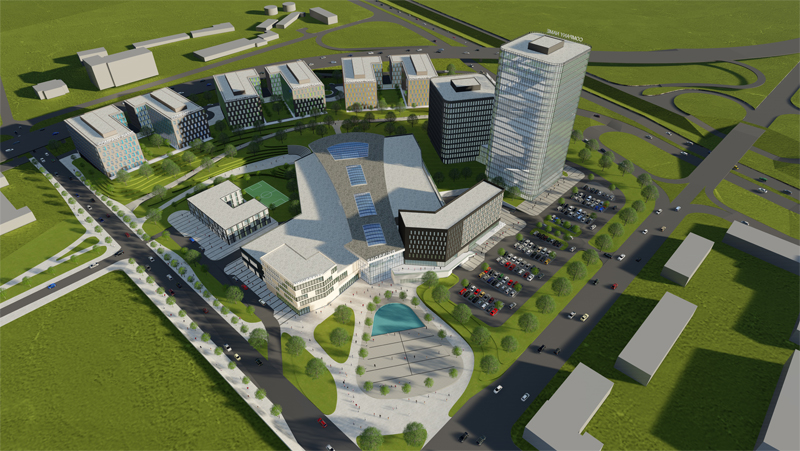 Companies will be able to choose between renting the whole office buildings or separate office spaces and workplaces in co-workings.

To ensure the constant inflow of talents, the IT Park will provide technical labs, libraries, and co-working spaces. Apart from this, there will be public areas where students will be able to study and attend various workshops. In the premises of the Innovation District IT Park, the students will also be able to network with experienced software developers.

The project is based in Lviv. It is to become a new complex for IT professionals and a community of people with common interests. As reported by Lviv IT Cluster, the complex of 17 hectares in total will consist of 133 separate houses. The project is due in 2022. The living space will consist of 5 different project types. As a result, future residents will be able to choose the house, which corresponds to their needs. 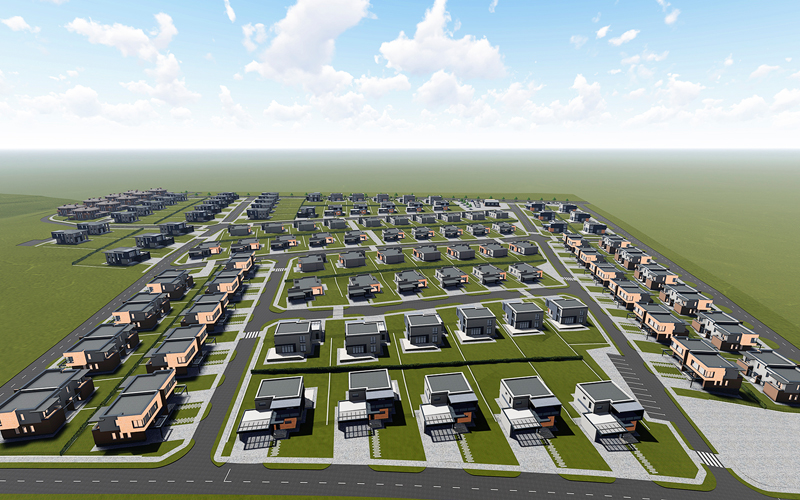 This is the first innovation park, which is located in Kyiv. The capital has a well-developed infrastructure, so it comes as no surprise that such projects come there. The park stretches on the territory of 25 hectares. For now, it houses 108 resident companies with 4 R&D laboratories, 3K students of UNIT Factory IT-School, and this is just the beginning. The aim until 2025 is to provide 15K tech jobs, 300+ companies, and R&D laboratories. 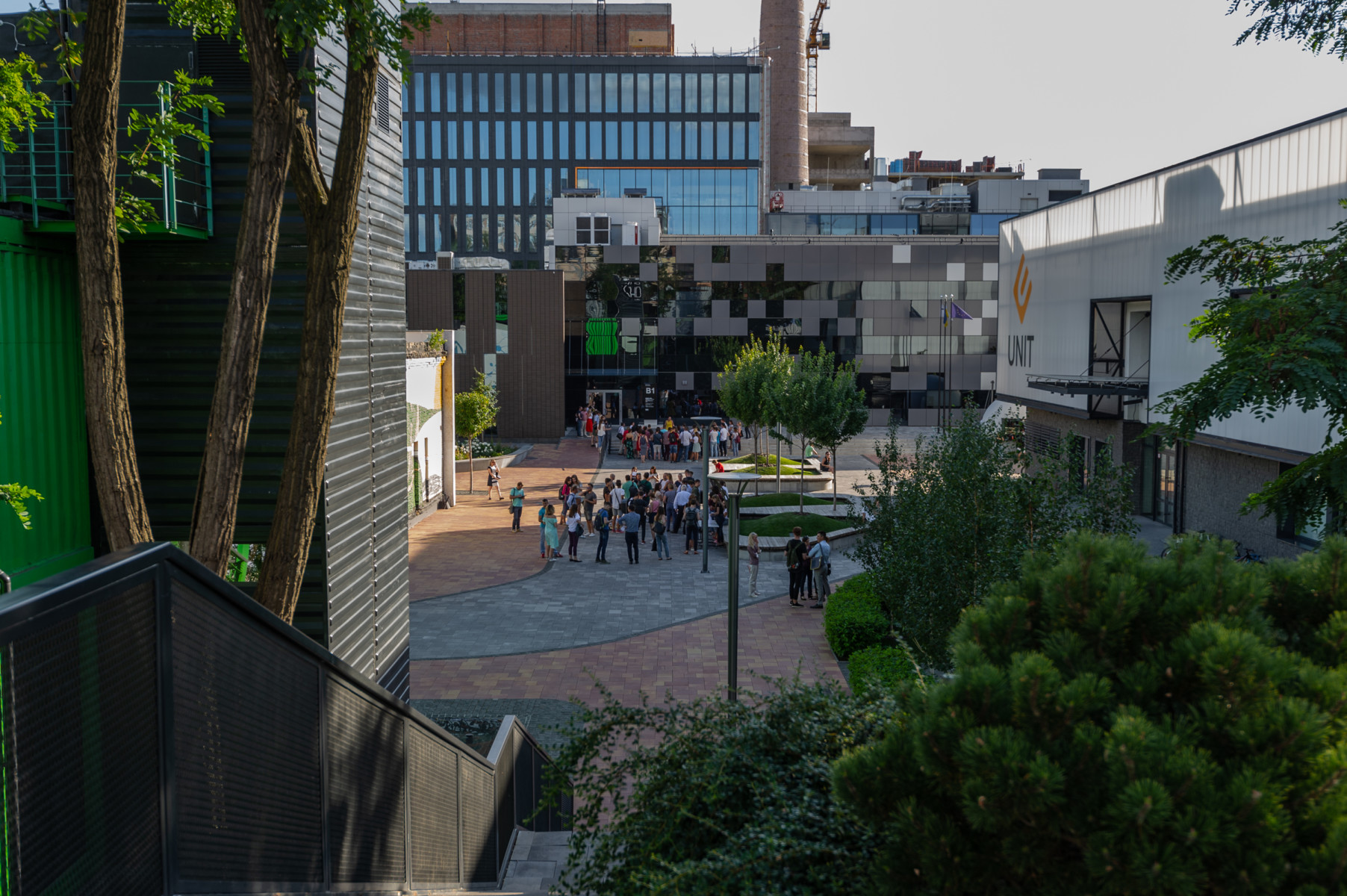 The creators of the UNIT.City started a similar project in Lviv. This park will occupy the territory of 1,77 hectares, and the total area of the office will be more than 60,000 m2. The complex will provide offices, co-working, and creative spaces, gyms, leisure rooms, underground parking and more. The territory will be divided into office and living areas. 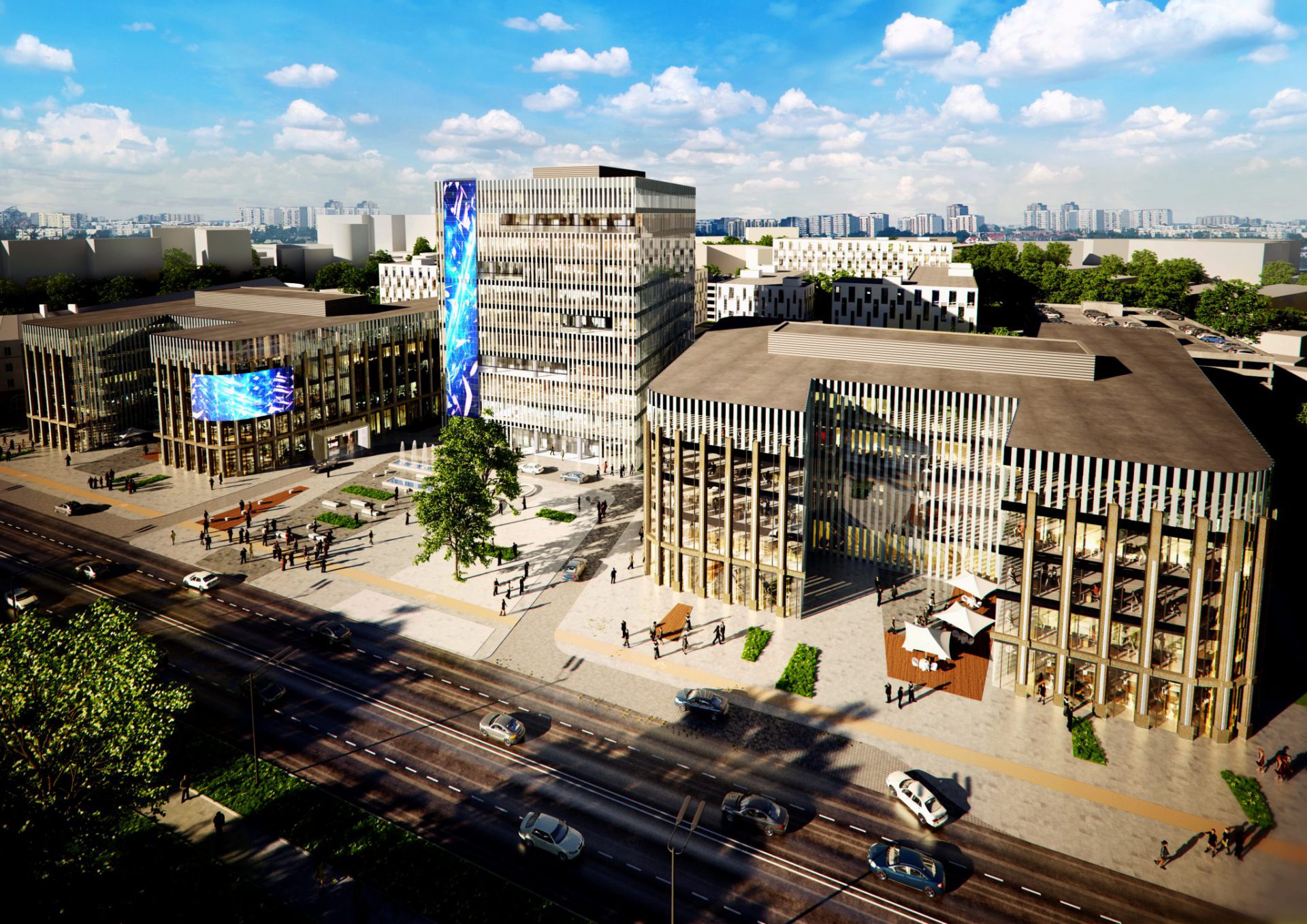 IT infrastructure and IT facilities in Ukraine are developing at a high pace due to many different factors. One of them is the initiatives of local IT Clusters. They engage financing from foreign and Ukrainian companies, creating the business environment in their cities. Apart from that, the IT clusters cooperate. They aim at spreading the word about Ukrainian software developers all over the world.

Innovation District IT Park, IT Village, UNIT.City, and LvivTech.City are projects intended at uniting developers in Ukraine, creating a space for self-improvement. These complexes are highly technological communities, which help to develop both the IT sector in the cities and the cities themselves.

The development of the IT infrastructure and facilities in Ukraine is of great importance, as it will attract even more tech professionals as well as investments for further improvement.