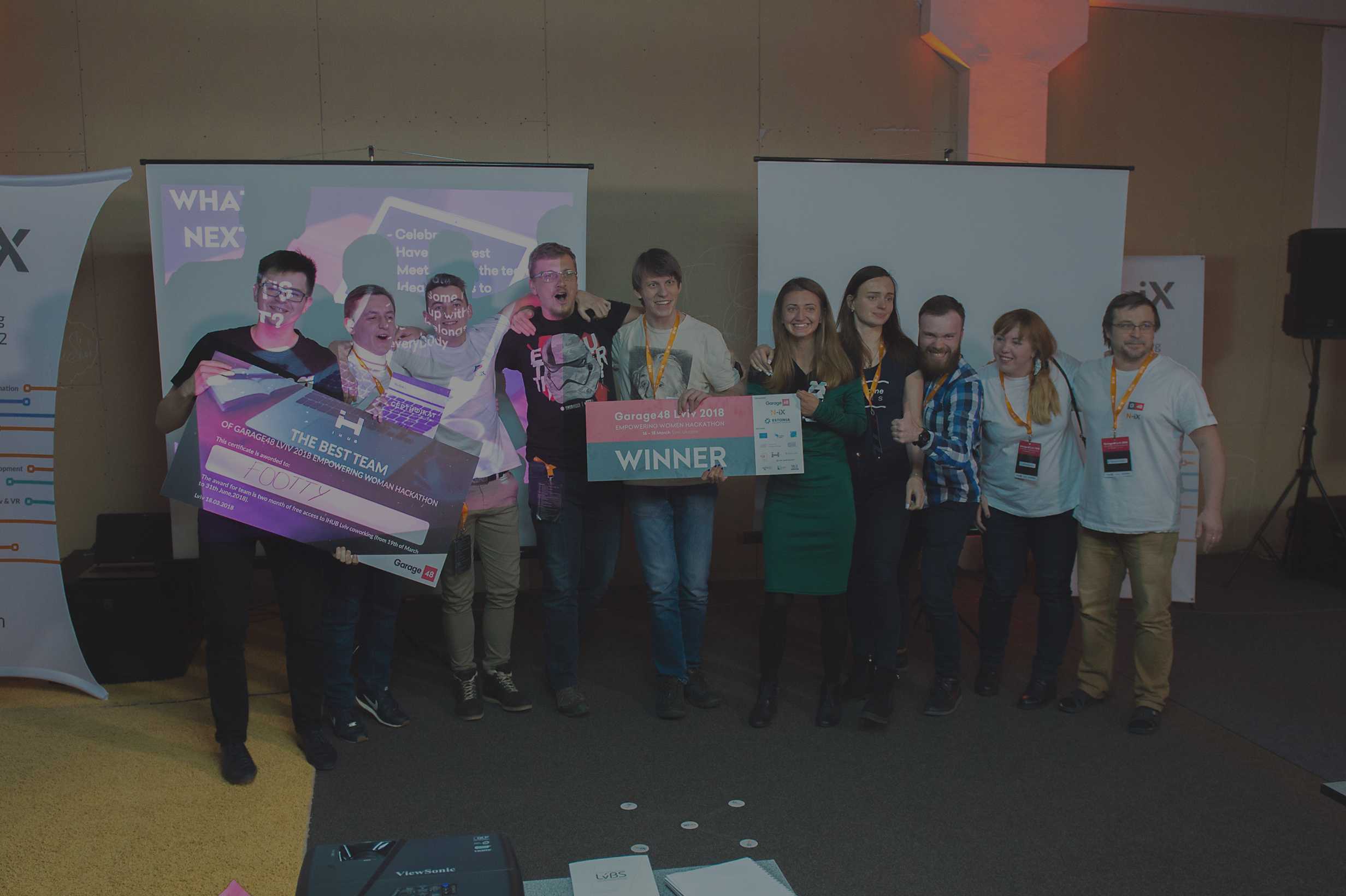 Garage48 and Archimedes Foundation are coming to Lviv for an Empowering Women – Estonia 100 Edition hackathon to encourage more women to take the entrepreneurial path! The Lviv Garage48 event will traditionally take place at N-iX HQ, and N-iX will take a role as co-organizer.

The hackathon starts on November, 2, opening 48 hours of fun, coding, building, designing, marketing and thinking big! For the fifth time, organizers prepare everything for participants to feel comfortable while developing their business ideas into working prototypes. Besides, every Garage48 hackathon brings the atmosphere of freedom and open-minded networking that grants with new acquaintances, business connections and startup expertise obtained from mentors and experienced participants.

The agenda: teams are formed on the spot around the best ideas, then follow 48 hours of energy, brainstorming and hard work, all in order to turn the initial idea into a working prototype.

All the finished prototypes/apps/platforms will be presented at the Sunday finale and the best teams will receive rewarding prizes that will enable them to develop their ideas even further! 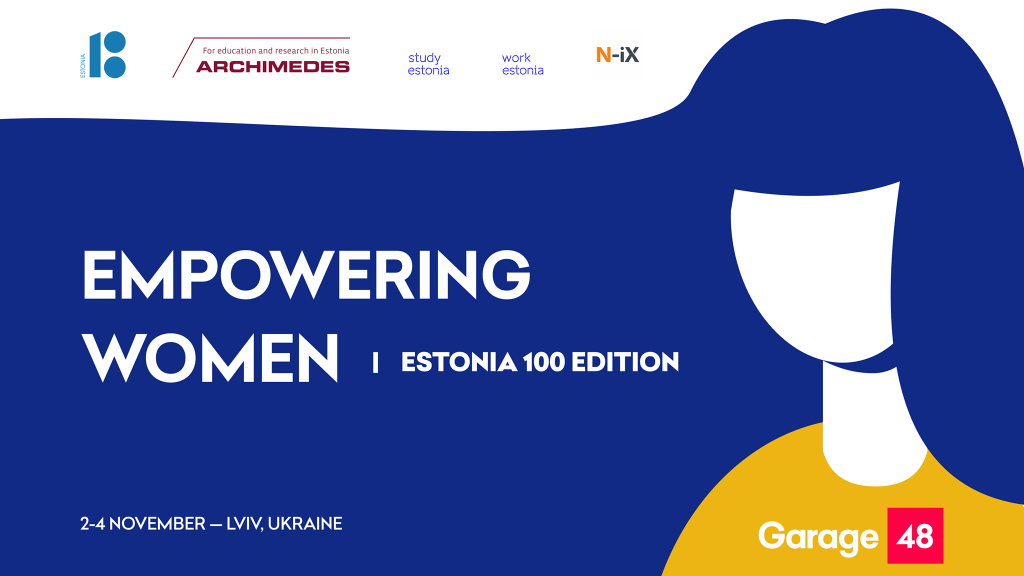 There will be a number of international and Ukrainian mentors that will help participants with challenges and suggest right directions.

Among the Empowering Women mentors are::

Jaanika Merilo (LinkedIn, Facebook) – a woman that started her career as a developer in Estonia, continued as an investor, and now is Deputy Mayor of Dnipro, Advisor to Ukrainian Minister of Infrastructure and Transportation, and Chief Innovation Officer in Lviv. Jaanika is a great personality of Empowered Woman that developed and spread her business and entrepreneur success from Eastern Europe to the globe.

Andrew Pavliv (Facebook, LinkedIn) – CEO and Founder of N-iX, a Ukrainian serial entrepreneur and an accomplished businessman with extensive experience in tech startups and IT outsourcing. Passionate and dedicated executive with over decades experience, Andrew has been at the forefront of the rise of IT-industry in Lviv, currently Ukraine’s second largest technology hub, he is a founding member of Lviv ІТ Cluster, an association of companies that took a lead to transform the tech ecosystem in the region, and is currently its Chairman. Founder of one of the first Ukrainian product startups that have made a successful exit to the global market has also played an executive role in a number of tech startups targeting global markets including Zadzen Games, ThickButtons and Unshared.TV. You may read Andrew’s in-depth interview with The Ukrainians here.

History of Garage48 Hackathons in Lviv

As mentioned at the beginning of the post, it’s not the first time Garage48 bring vibrant coopetition to Lviv, where hosted at N-iX HQ. Let’s dive into the history of Garage48 in Lviv to see what’s the deal clearer.

The first Empowering Women Hackathon in Ukraine started this year in spring. It was organized by Garage and N-iX as co-organizer and held in a spacious Lviv N-iX HQ.

“There are slowly more and more women in an IT and technology sector in Ukraine, but around 84% of the people in this industry are still men. With the events like this, we boost the entrepreneurial skills of both boys and girls and show that equal is better.” 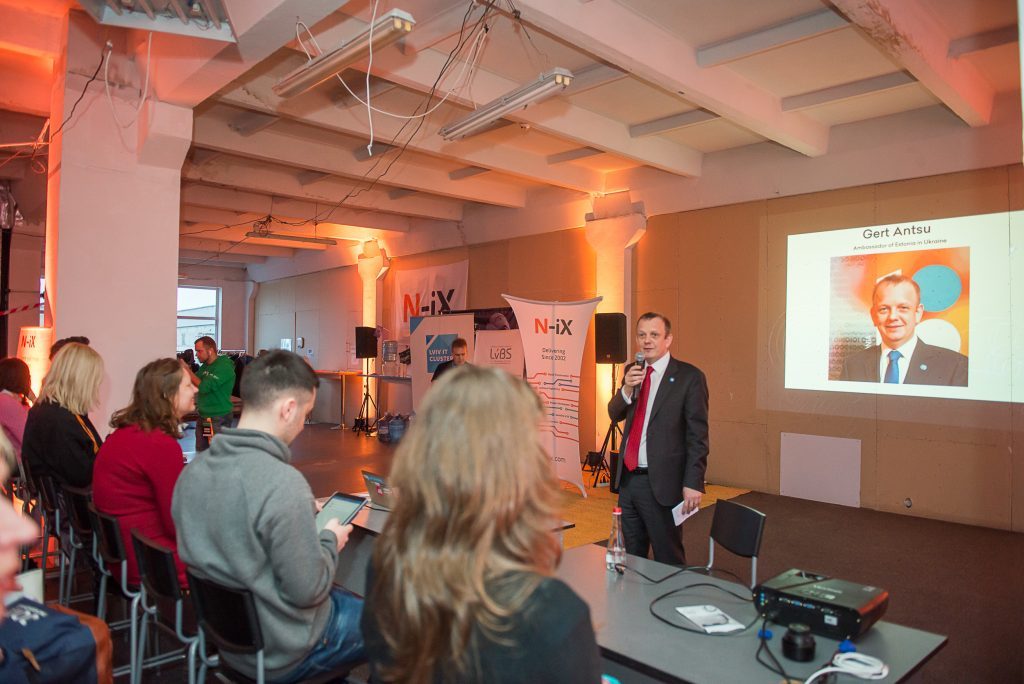 The event exceeded the bravest expectations – around 60% of participants were women. It was the first time women were the majority.

Another exclusive fact – there were 2 winners – also the first time in the history of Garage48 hackathons. Be With Me and Footty were simultaneously announced as two teams that took the 1st place.

See final pitches and award ceremony in the live video record on Facebook.

And here’s a comment from the idea owner and a lead of award-winning Be With Me, Vasyl Hukalyuk:

“We lost the past hackathon because we simply did not consider that it was necessary to put so much effort in developing a business idea out of our tech solution. We won this one as we learned from our mistakes. You should have a precise description of your business idea and present it well.”

Read the hackathon report in English or in Ukrainian. 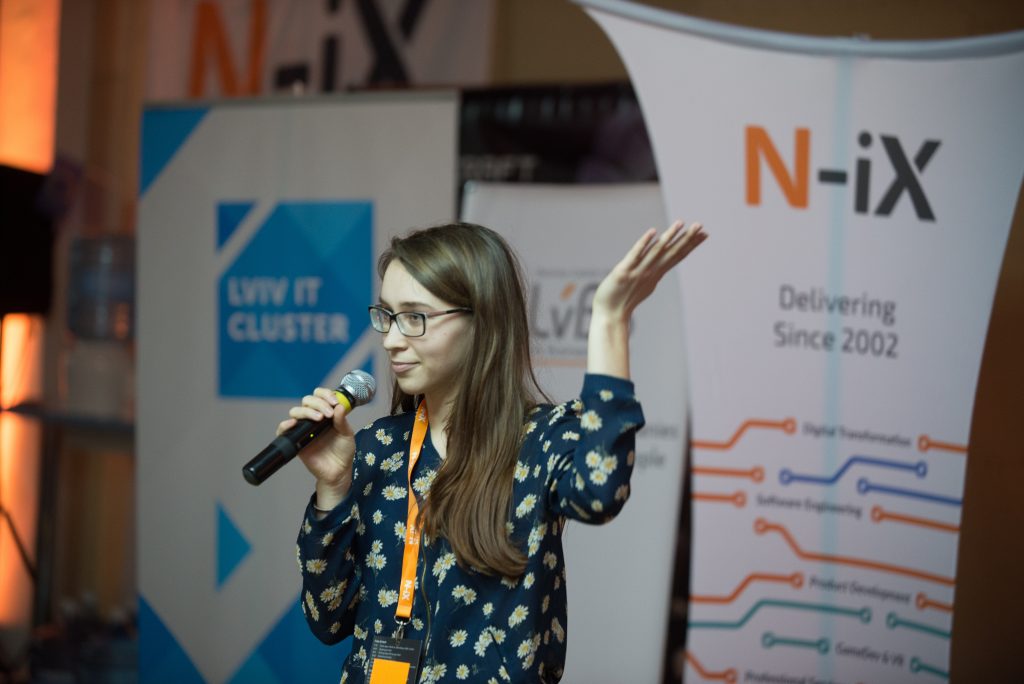 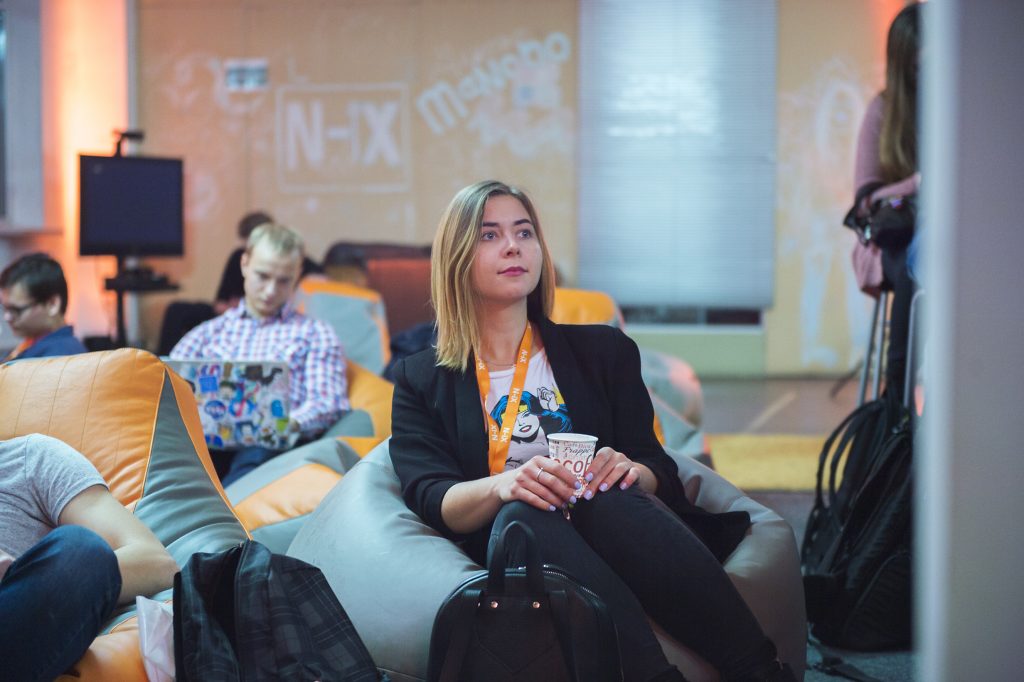 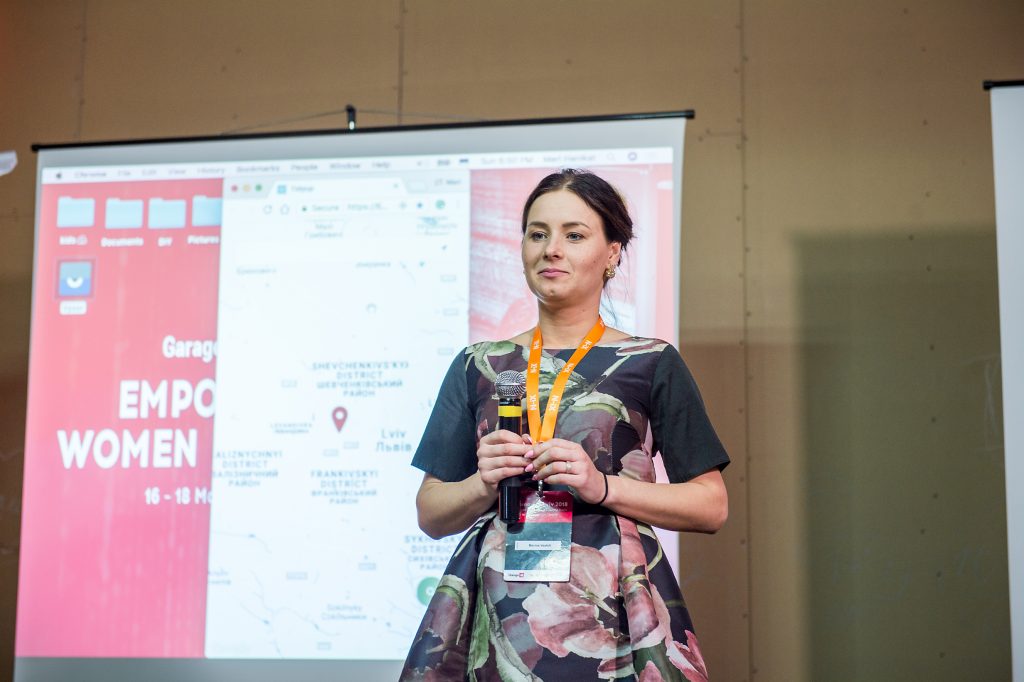 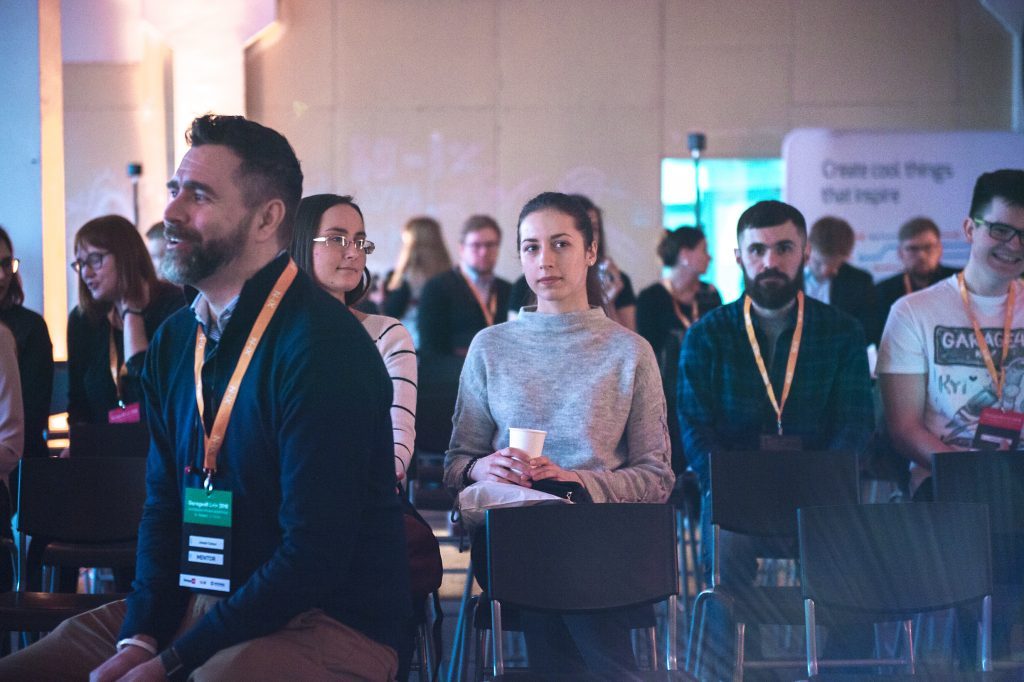 In 2017, Lviv Garage48 hackathon was a software-themed and was merely dedicated to mobile. 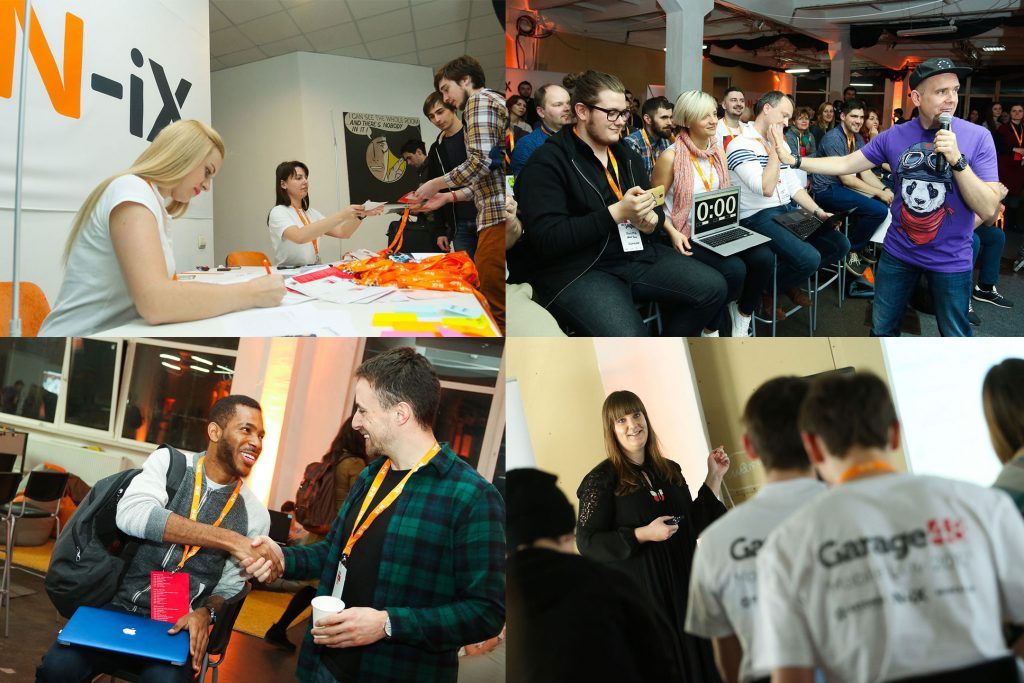 After 48 hours of the competition, the jury announced the winner – a travel insurance mobile application GoBuddy. Not only did the team get the main prize of $10,000 investment from the organizers, but N-iX CEO Andrew Pavliv made an additional contribution of $10,000 thus raising seed investment to $20,000 and expressing his confidence in the project. Andrew Pavliv emphasized that:

“GoBuddy team showed a great result, their idea has everything necessary for success on the global market. This product combines Fintech and Insurtech in a chatbot messenger targeted at millennials – the customer group who often aren’t aware they need such product”.

Oleh Stasula, the main visionary of the project, is an iOS developer from Lviv in his twenties who has worked as a lead developer at Pipedrive for 2 years. Oleh Stasula noted:

“I have participated in over 10 hackathons and it’s my 5th Garage event. This event is the coolest because it has allowed me to achieve the most. This is the first place where I’ve pitched an idea and I’m very happy it has happened in Lviv.” 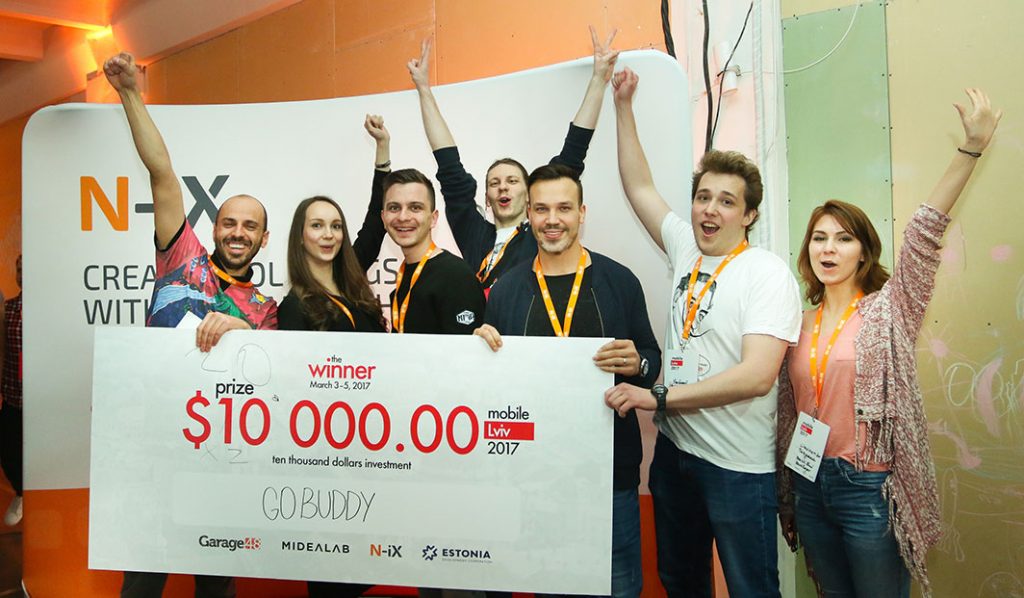 Another participant of the hackathon, Ostap Andrusiv, wrote two brilliants pieces of content, including tips on how to reach success or just have fun and new knowledge on events of such kind. Ostap outlines the importance of rest, communications, and business orientation.

How to Hackathon Effectively:

“I think developers would put me on fire for this, but I’m sure that product-oriented hackathons need marketers, economists, and designers even more than coders. Why? On the final pitch, a team will have only 180 seconds, and many show a nice prototype instead of a working product. I don’t really like such practice, however many products are born exactly like this: you have a landing page, you have screenshots, but still no product.”

How I Failed on Hackathons:

“On Garage48 our team guys made a colossal amount of work. We were one of the few who demonstrated a real working live demo. However, product hackathons are won by not the teams with working demo but by teams that:

The second Garage48 hackathon in Lviv brought a lot of thrilling projects. Altogether 19 ideas were pitched, of which 11 managed to attract teams.

“Lviv proved itself to be the capital of engineers, as hackathon participants managed to deliver very high-level results within a short period of time”, says Karin Rand, one of the Garage48 organizers. “All the teams had a very strong background in technologies they used and very good development skills, but there are still some things to work on such as market understanding, project management, design and presentation skills which are also very important components of every startup success.” There is one major difference between Garage48 in Ukraine and Garage48 in other countries. In Ukraine, organizers used to receive most of the applications from developers (especially back-end), but to bring a working product into life each tech team needs to have at least one designer, marketer and project manager. Unlike many other hackathons, Garage48 is not only about coding, but more about bringing up new startup ideas and setting up teamwork. “The event is open to all startup-minded people regardless of technical background and we hope, that next time we will receive more applications from marketers, managers and designers to make Garage48 even larger event”, adds Karin.

An award for the best app on Garage48Lviv 2015 went to Magic Messenger, an anonymous chat matching people randomly based on their likes and interests. Two other winners were Team to Travel, a service that provides opportunities to find travel buddies that became “Best B2C” and QuestPlaces, a platform offering easy tools to create, share and pass different quests that were named “Best B2B”. 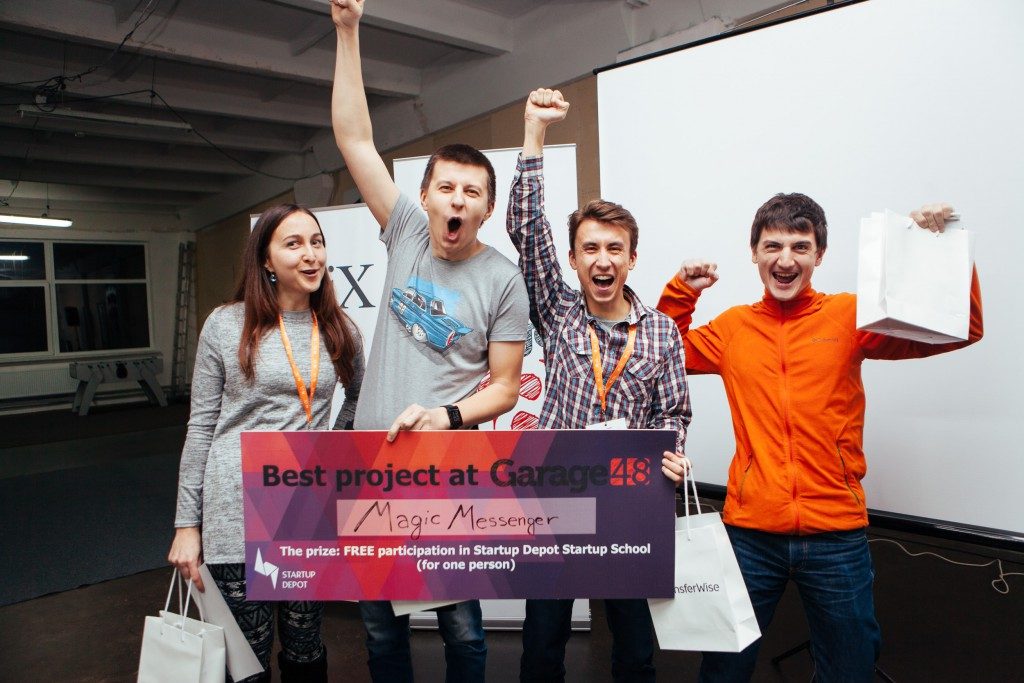 It was the first time Lviv hosted the Garage48 hackathon. The event took place in N-iX HQ then moving to Kyiv and Odesa.

28 ideas got pitched on stage and 13 of them presented working prototypes on Sunday. The jury selected AimMe, a web platform to support making good deeds, as the overall Winner! One of the 7 team members of AimMe is Mykola Kavf, a back-end developer at N-iX that time and the one, who has made the company proud at the event.