IT outsourcing destinations: Ukraine vs Russia

Ukraine and Russia both have strong systems of STEM education and large engineering talent pools. And their IT markets attract large tech companies. But they are not the same. What do they have in common? What makes them strikingly different? And which one is better for outsourcing your software development to now? Let’s view IT outsourcing to Russia and Ukraine in more detail. 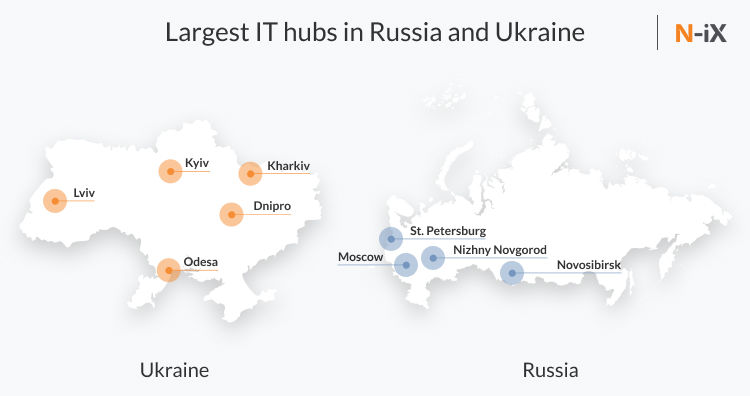 To shed light on these and many other questions and help you choose, we have analyzed the A.T. Kearney Global Services Location Index, SkillValue ranking of the best developers, Bloomberg Innovation Index, QS and Times Higher Education world university rankings, and more.

OVERVIEW OF IT OUTSOURCING IN RUSSIA AND UKRAINE

In Russia, the IT industry is a well-developed domain. The export of software development services totals $5.3B, as estimated by the Russoft Association in 2018. The offshore software development in Russia amounts to about 0.5% of the entire volume of Russia's export. The country houses over 400,000 ICT professionals, which constitutes 0,2% of the population.

Сompanies such as Siemens, Intel, Motorola opened their R&D centres in Russia. What's more, such large-scale businesses as Tele2, Starbucks, and Danone opted for IT outsourcing to Russia. And it comes logical as Russian programmers are known for a strong tech background and high level of coding skills. SkillValue 2019 rating of top developers ranked Russian programmers 20th in the European rating of the most skilled developers, and 22nd - in the global ranking. However, the EF English Proficiency Index ranks Russia as a country with low English Proficiency [5], and communication with Russian tech experts may be a bit challenging.

In Ukraine, IT outsourcing is one of the most vibrant industries. The export volume of Ukraine’s software development and IT services amounted to $4.5B in 2018 [1]. And the figure tends to grow. The country is a well-recognized outsourcing spot, which is proven by awards such as GSA Global Sourcing Awards, Global Outsourcing 100 by the IAOP, and others. The country boasts around 200,000 IT professionals, which makes up 0,5% of the overall population, and 1, 600 + IT outsourcing companies of different shapes and sizes.

Such tech leaders as Microsoft, Samsung Electronics, Huawei, Wargaming, Boeing, Skype, eBay, Siemens have R&D offices here. And many large-scale businesses and enterprises such as Lebara, Panasonic, Nokia, Bosch, Gorenje, Vodafone, HP, Flixbus, Gogo, Currencycloud, and many others have chosen to hire a dedicated development team in Ukraine. What's more, many successful startups have all been founded in Ukraine. They include Looksery (bought by Snapchat for $150M), PetCube, Grammarly, Viewdle (purchased by Google Inc. for about $45M), Preply, Clickky, and many others.

Ukrainian developers are known for the high level of their tech skills. According to SkillValue ranking 2019, Ukrainian professionals made it to 4th place among tech professionals in Europe. Moreover, Ukrainian developers performed well in the global ranking too, as stated by the SkillValue ranking of best developers in the world. They were ranked 5th, with a 93% score index. 47% of Ukrainian IT specialists have upper-intermediate and advanced English, which makes communication and cooperation with international clients smooth.

To learn more about software development in Ukraine in 2019-2020 - check out the IT market report. 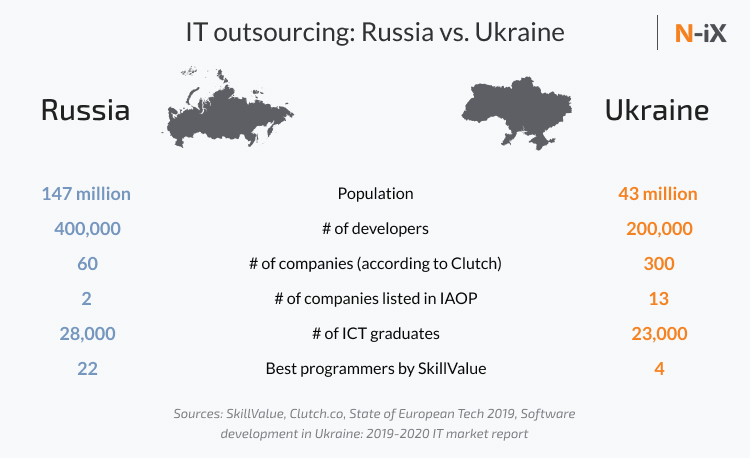 FAVOURABLE LOCATIONS FOR IT OUTSOURCING

Cooperation with a vendor that is located close to you is a great advantage. For example, it takes only a few hours to get to Ukraine from most European countries, and its time zone is Greenwich Mean Time (GMT)+2. Favourable geographical location of the country and 19 airports with convenient flight connections make it easy to get to any outsourcing hub in Ukraine: Kyiv, Lviv, Odesa, Dnipro, and others.

Russia is the biggest country in the world, and that has both its pros and cons for IT outsourcing there. The country has a well-developed transportation system with 144 airports. However, when you need to get from London to Novosibirsk, one of Russia's top IT hubs, it takes 10 hours, and from New York - 16 hours. What's more, visa requirements cause difficulties to travel to Russia. 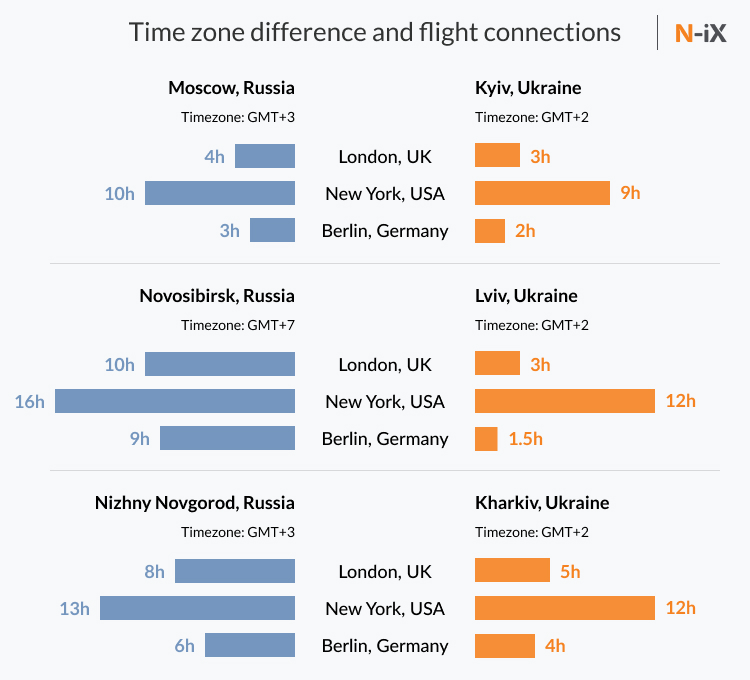 IT OUTSOURCING HUBS AND TOP COMPANIES IN RUSSIA AND UKRAINE

Moscow, St. Petersburg, and Novosibirsk are the top IT outsourcing hubs in Russia. They cover around 70% of the total market and are home to the majority of tech companies in the country. Russia has 2,100 software development companies with export revenues ( including product companies). 90% of market players are small and medium-sized companies.

What is peculiar about the country is that the Russian government is the biggest customer in the IT market, and many companies are created to serve governmental purposes. And despite the country’s reputation as a source of top software engineers, the reality is that the pool of actually qualified specialists is limited as Russia's IT market is dominated by top 10 Russian IT companies, many of which serve domestic purposes, such as I-Teco, Maykor, Technoserv.

Clutch, a leader's matrix of providers, features 60 Russian IT service companies. And according to the 2020 Global Outsourcing 100 by IAOP, two Russian companies made it to the list of the world’s top outsourcing providers.

Top IT outsourcing hubs in Ukraine are Kyiv, Lviv, Odesa, Kharkiv, and Dnipro. The country is home to 3, 000 + tech companies, including 1,600 + IT outsourcing companies, according to the State Statistics Service of Ukraine [8]. 300 + Ukrainian software development companies are listed by Clutch, and thirteen Ukrainian software development companies made it to the list of top best outsourcing providers in the world, according to the 2020 Global Outsourcing 100 by IAOP. The list includes such companies as N-iX, SoftServe, and Eleks. What's more, 100 + Ukrainian IT companies have cooperated with Fortune 500 companies.

BUSINESS CLIMATE FOR IT OUTSOURCING IN RUSSIA AND UKRAINE

A favourable business climate of a country is vital in terms of a company’s performance, brand reputation, and growth.

What concerns Ukraine, the country has taken a major step forward in improving its business climate with the appointment of a Business Ombudsman Council for the country’s Anti-Corruption Initiative that was established in May 2016 and increased the financial assistance of the United States. As a result of the sustainable progress, Ukraine’s Ease of Doing Business ranking has improved by 66 positions since 2013. Furthermore, Ukraine notably simplified the taxation system of the IT sector, making it more attractive for investors.

A. T. Kearney research indicates that the country’s financial attractiveness, people skills, and business climate have significantly improved. In 2019, Ukraine has taken the 20th place in The A.T. Kearney Global Services Location Index and outperformed other Eastern European IT outsourcing destinations like Poland, Romania, Latvia, and Hungary. Both Ukraine and Russia have improved their positions in the A.T. Kearney Index since last year [1].

According to the Bloomberg Innovation Index, Ukraine is four positions higher than last year [1]. The tech sphere now has a 3-5% share of the country’s GDP.  IoT, Blockchain, AI, VR/AR/MR are the most developed tech domains in the country. Russia, in turn, has improved by five positions.

Both countries are innovation-oriented and take steps to improve their business climate. However, what hampers cooperation with the Russian IT companies is global economic sanctions. These restrictions were put on the country because of the military conflict between Russia and Ukraine. The sanctions make it more challenging to do business in the Russian Federation.

What regards Ukraine, despite the ongoing armed conflict with Russia, Ukraine is safe for software development outsourcing as major IT hubs in Ukraine - Kyiv and Lviv, are closer to Prague, Krakow, and Berlin than to the conflict zones. Plus, to settle the conflict and keep it under control, Ukraine is cooperating with the US and Canadian army, the US Congress, the UN, and many international organizations.

TECHNICAL EDUCATION OF UKRAINIAN AND RUSSIAN IT EXPERTS

The literacy rate is very high in Ukraine and Russia: 99,8% and 99,4%, respectively. In both countries, education is a high priority. Ukraine, for instance, invests heavily in education and gives access to state-funded schools. In Russia, education is also managed primarily by the government.

According to the DOU survey, 81% of the Ukrainian IT specialists have an intermediate and higher level of English, and this figure tends to grow. It used to be 79% back in 2018 [4].

Moreover, both countries are known for their strong technical education. For instance, in Russia, there are 3,500 engineers for every 1 million people. Whereas in Ukraine, roughly 41% of women and 64% of men have STEM-related degrees, as stated by DOU. Besides, Ukraine has one of the biggest shares of STEM graduates in Europe, reaching 9,8%. So, both Ukrainian and Russian programmers have a strong academic background. But what universities provided the most quality STEM education?

We have analyzed the most trusted world university rankings by Times Higher Education and Quacquarelly Symonds. These rankings evaluate higher education institutions based on their research activities, cooperation with other universities, and many other factors.

According to the Times Higher Education ranking, the three best universities that educate Russian software developers are located in Moscow [9]. This fact means that the best and most educated talent is concentrated in the capital. The most prestigious institution in the country is Moscow State University.

In Ukraine, the situation is a bit different, as the best universities are located in several different cities: Kyiv, Kharkiv, Lviv, and Sumy. Lviv Polytechnic National University is the best institution in the country that offers a computer science program.

QS World University Ranking shows slightly different results about Russia: universities from Tomsk, Novosibirsk, and St. Petersburg, along with Moscow, are ranked among the best for the future Russian programmers[7]. However, the majority is located in the capital anyway.

In Ukraine, at the same time, results are similar between those rankings: the best universities can be found in Kyiv, Kharkiv, Sumy, and Lviv.

Both countries can boast of a significant number of ICT graduates each year. The figures in Russia and Ukraine are 28,000 and 23,000, respectively [8]. This fact means that both IT markets experience regular talent inflow, leading to constant IT outsourcing market development.

CULTURAL AFFINITY WITH CLIENTS FROM WESTERN EUROPE AND THE USA

Both Ukrainian and Russian programmers have strong communication skills. Moreover, to improve the English skills of local developers - software development vendors usually organize internal speaking clubs and offer reimbursement for external courses. Besides, there are companies in Ukraine where English is a language of corporate communication.

The work ethic in these countries is similar to that in European countries, the USA, and the UK. Both Ukrainian and Russian software developers are good team players, known for their flexible attitude and high responsibility.

Ukrainian tech professionals have considerable experience in cooperation with businesses from American, British, and Western European markets. To learn more about intercultural communication with Ukrainian developers - check out the article.

Many global businesses choose Ukraine and Russia for outsourcing their software development too. Both countries offer a large talent pool of engineers, a high level of tech education and engineering skills as well as cultural affinity with western companies. However, Russia lags behind in the ease of doing business due to the sanctions imposed on the country. Also, you may face difficulties finding the right experts promptly as the Russian IT market is dominated by the top 10 companies, many of whom serve domestic purposes.

If you want to learn more about partnering with a reliable IT outsourcing partner in Eastern Europe, please contact our experts.

25 November 2022
Cloud DevOps: how a single engineer can make or break your project
The state of the global economy is far from stable at the moment. So, businesses are constantly looking for new ways to make their processes more efficient and less expensive. One of the most viable c...

14 November 2022
Top SaaS developers for your project: how to find them
According to McKinsey [1], modern businesses expect to get 50% of their revenue from new businesses and products by 2026. To make it happen, many companies choose to implement SaaS products. SaaS solu...